Russia eyes route to Trans-Dniester: What do we know?

The Russian military said it plans to seize all of southern Ukraine and open a route to the breakaway Moldovan region of Trans-Dniester. DW takes a look at the region and why Russia's announcement has sparked concern. 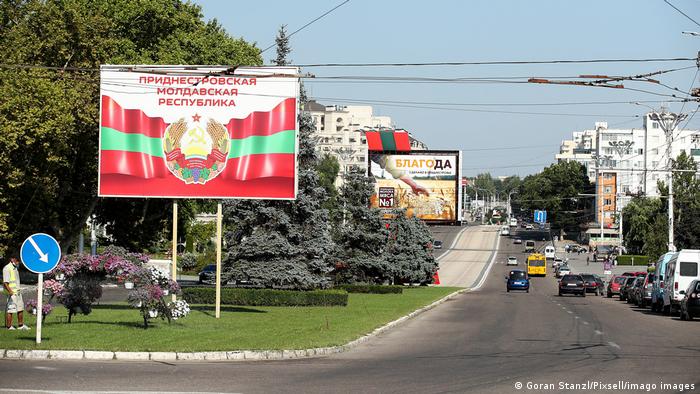 The unrecognized 'Pridnestrovian Moldavian Republic' in Trans-Dniester uses Soviet-style symbols, as seen here on the streets of Tiraspol, the region's capital

Major General Rustam Minnekayev, acting commander of Russia's Central Military District, said on Friday that Moscow plans to establish full control over the Donbas region and southern Ukraine, as part of the "second phase" of its military operation.

He also claimed that control of southern Ukraine would give Russia a gateway to the breakaway Moldovan region of Trans-Dniester, where there are "facts of oppression of the Russian-speaking population."

The announcement has sparked concern that Russia could use the territory to launch attacks on western Ukraine, or move in on Moldova.

Trans-Dniester is a narrow strip of land on the east bank of the Dniester River, sandwiched between Ukraine and Moldova. The breakaway region seceded from Moldova after a brief military conflict in 1992.

In this conflict, separatists were supported by Moscow. Russia still has about 2,000 soldiers, as well as around 300 peacekeepers, stationed in the region and regularly conducts military maneuvers there.

The separatists dubbed the region the "Pridnestrovian Moldavian Republic" (PMR), but not even Russia recognizes it as a sovereign state. In 2006, the region held an independence referendum, but the results were not recognized by the international community.

What is the status of Russian speakers in Trans-Dniester?

The Russian general's statement about the alleged oppression of the Russian-speaking population in Trans-Dniester has raised eyebrows — particularly as the region has been ruled by a pro-Russian regime since the early 1990s.

PMR has three official languages — Russian, Romanian and Ukrainian — to represent the three major ethnic groups living in the region, but Russian is a predominant language there.

The region's population has declined over the years and is estimated to number around 460,000 people. According to the 2015 local census, Russians made up 29.1%, Moldovans 28.6% and Ukrainians 22.9% of the population.

How did Ukraine react to Russia's plans?

Kyiv has previously warned that Russia may use the forces it already has in Trans-Dniester to launch attacks into central and southern Ukraine, potentially surrounding Ukrainian forces in the south of the country, especially around the Odesa region.

Responding to the Russian plans, the head of the Office of the President of Ukraine Andriy Yermak stated that Ukraine is prepared in the event Russia maneuvers into the breakaway Moldovan region.

"We have our own scenarios for defending Ukraine and I want to remind you that many Kremlin plans have been destroyed by our army and people," he wrote on Telegram.

The Ukrainian Defense Ministry denounced Russia's plans to take full control of Donbas and southern Ukraine as "imperialism." The ministry added that the comments contradict Moscow's claims that it does not have territorial ambitions.

"They stopped hiding it," the ministry said on Twitter. It also said Russia had "acknowledged that the goal of the 'second phase' of the war is not victory over the mythical Nazis, but simply the occupation of eastern and southern Ukraine."

What is Moldova's position?

Since the Russian invasion of Ukraine began, Moldova has taken a cautious stance on the conflict — declaring itself neutral.

The country, located between Ukraine and Romania, has so far taken in hundreds of thousands of Ukrainian refugees and provided Ukraine with humanitarian but not military aid. The Moldovan government also expressed support for Ukraine but has not sanctioned Russia.

Moldova is one of the poorest European countries and is heavily dependent on Russian gas supplies.

The presence of Russian troops in Trans-Dniester prompted fears among Moldovans that a victory of the Russian invading forces in Ukraine could also see the Kremlin march its army into their country.

Earlier this week, however, Moldova banned the "Z" and "V" symbols used in support of Russian troops attacking Ukraine, as well as the Saint George's ribbon, which is considered a mark of Russian President Vladimir Putin's supporters. This move provoked a sharp reaction from Russian officials.