The Kremlin critic's deteriorating health has become so bad "it's hard for him to speak and sit up," his lawyer said. Navalny supporters are set to take to the streets on Wednesday to vent their anger over his treatment. 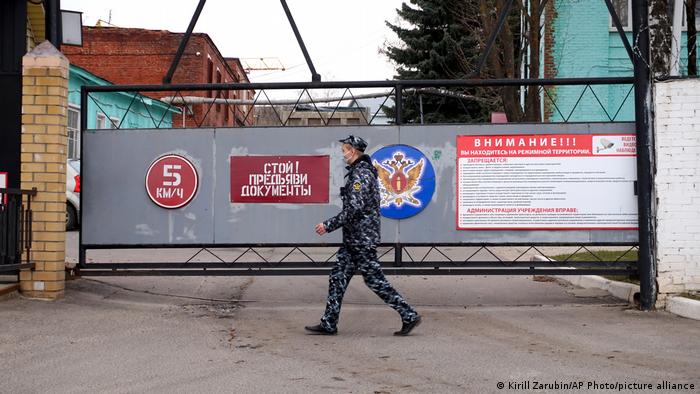 Navalny's life is in danger, his associates have said.

Doctors were prevented from seeing jailed Kremlin-critic Alexei Navalny on Tuesday, as Russian police began cracking down on his supporters on the eve of planned protests.

Navalny's lawyer Olga Mikhailova told reporters that her client had become "very weak" and "it's hard for him to speak and sit up."

Navalny, who is in a prison hospital after being on a hunger strike for the last three weeks, was moved over the weekend from a penal colony near Moscow to a medical unit at a prison in the city of Vladimir, some 180 kilometers (110 miles) east of the capital.

A team of physicians, including Navalny's personal doctor Anastasia Vasilyeva, traveled Tuesday morning to Vladimir but were ultimately barred from assessing him.

Navalny's medical team has been trying to visit him since early this month, after he began refusing food to demand proper treatment for a litany of ailments. 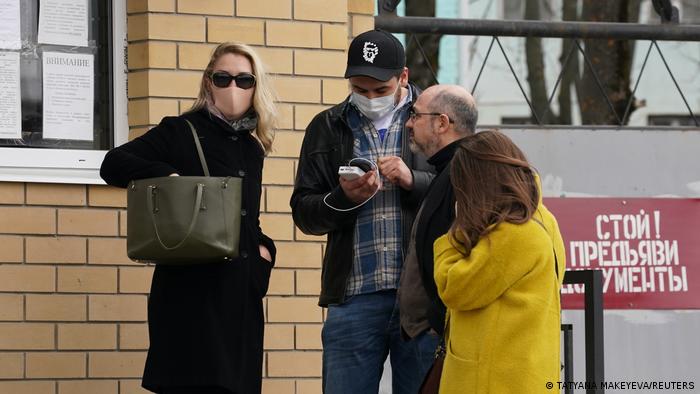 Navalny's personal doctor, Anastasiya Vasilyeva (left), is seen outside the penal colony which houses a hospital where the the opposition leader is currently located

Navalny could die 'any minute'

Doctors over the weekend warned that the 44-year-old's health was deteriorating to such an extent he could die at "any minute," while the United States threatened Russia with "consequences" in the event of his death.

Another legal representative of Navalny, Vadim Kobzev, said that the dissident has so far received only one glucose injection since Sunday at the hospital unit, which is intended to treat those suffering from tuberculosis.

Six other attempts to give him a shot failed because paramedics weren't sufficiently qualified to find his vein, according to Kobzev. "His arms are all blue with the shots," the lawyer said.

Meanwhile, there were reports of Navalny supporters already being arrested in St. Petersburg, Tver and Volgograd, ahead of more widespread protests planned for Wednesday.

Demonstrations are expected in more than 100 cities and towns across Russia.

One of President Vladmir Putin's most ardent critics, Navalny last week found some unlikely support in the shape of a number of celebrities. A letter signed by J.K. Rowling, Benedict Cumberbatch, David Duchovny, among others, called on Putin to offer Navalny the medical treatment he requires.

The Russian opposition figure says he is suffering from fever, but has vowed to continue his hunger strike. He has been moved to a sick ward and tested for coronavirus, local media reported.