The Federal Security Service says it has also seized items including homemade bombs and automatic weapons. The detainees are suspected members of the Takfir wal-Hijra militant group. 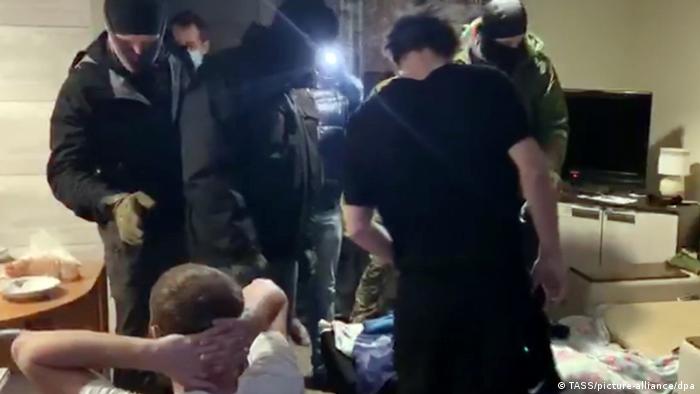 The FSB said it had seized a suicide belt, homemade bombs and automatic weapons from the suspects this month.

"Besides spreading ideological propaganda and recruiting new followers, they were plotting acts of sabotage and terror attacks in the North Caucasus," the FSB said.

An ex-jihadi returns to Russia

Who were the people arrested?

The detainees are suspected members of the Takfir wal-Hijra Islamist group, an organization which was founded in Egypt and has ties to al-Qaeda.

Ten out of the 19 arrested were organizers, and the rest were active participants, Russian news agency RIA said.

The members were spread across the Rostov, Krasnodar and Karachay-Cherkessia regions, as well as Crimea, the peninsula Moscow annexed from Ukraine in 2014.

Footage from the arrest showed FSB operatives climbing an apartment building and entering through a window to detain a suspect.

How often does this happen?

The group's targets include "civilians, media, mosques, journalists, political leaders, military, and Jews with assassination, armed assault, and bombings," according to trackingterrorism.org.

Russia has repeatedly been targeted by Islamist militant groups, including in an attack on a train in a St. Petersburg metro tunnel in 2017. The North Caucasus have also faced similar attacks in recent years.

Russian authorities have announced several operations to snuff out suspected Islamist cells, particularly in the south of the country and the Muslim-majority republic of Chechnya. The region's authoritarian head, Ramzan Kadyrov, has, however, been accused by rights groups of using the threat of Islamism to quash dissent.

Astronomers discover nearby 'super-Earth' 5h ago

US Capitol police tighten security after new threats 5h ago