Russia cracks down on Crimean Tatars | Europe| News and current affairs from around the continent | DW | 21.04.2016

Two years after annexing Crimea, Russia is setting its sights on the Tatars that live there. Their representative body, the Mejlis, has now been outlawed. Protests from Ukraine and Strasbourg are being ignored. 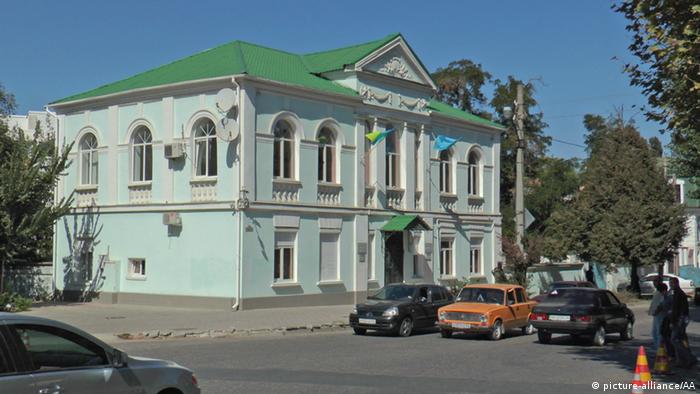 It is the hardest blow that the Crimean Tatars have suffered since Russia's annexation of the Ukrainian peninsula in March 2014. On Monday, Moscow's Justice Ministry officially suspended the work of the Mejlis of the Crimean Tatar People (pictured above). The representative body is now listed among those organizations banned by the Russian government for pursuing extremist agendas. With the move, the ministry is following the lead of the Prosecutor General of the Republic of Crimea, Natalia Poklonskaya, who announced her own decision to this effect a week ago. In mid-February she submitted a lawsuit to Crimea's Supreme Court seeking to ban the Mejlis. The judicial decision is pending.

The Mejlis is the single highest executive representative of the Crimean Tatars. Its 33 members are elected every two years by the Crimean Tatar people's assembly, the Kurultai. The suspension is a de facto ban, as it blocks all and any activity by the Mejlis. Its representatives are not allowed to appear on state or local media in Crimea, organize mass demonstrations or use bank accounts. "All of their propaganda will be banned," said Poklonskaya. 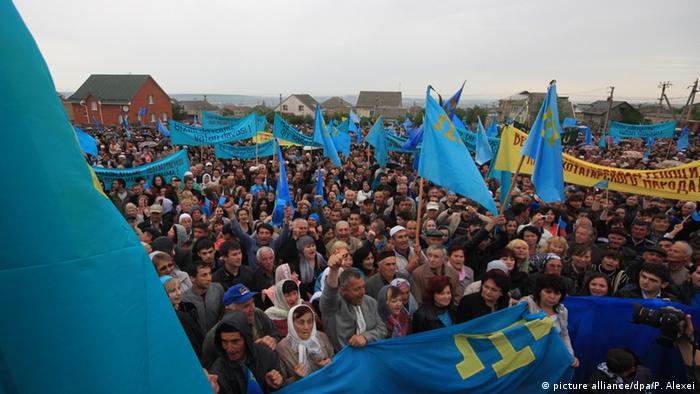 Crimean Tatars protesting in Kyiv against the peninsula's annexation by Russia

Criticism from the Council of Europe

Russia's decision has sparked criticism in Ukraine and abroad. Ukrainian President Petro Poroshenko said, "A line has been crossed." Andriy Parubiy, chairman of Ukraine's parliament, called for the UN Security Council to react to this "crime." In an interview, the former leader of the Crimean Tatars, Mustafa Dzhemilev, who now lives in Kyiv, called the suspension a "declaration of war" on his people.

Just a few days prior to the decision the European Union and the Council of Europe appealed to the Russians not to outlaw the Mejlis. A statement released by the Secretary General of the Council of Europe, Thorbjorn Jagland, demanded that the Crimean Tatars' representatives must be afforded the right to continue their work. The human rights organization Amnesty International publicly criticized Russia for destroying the rights of minorities.

Some 300,000 Tatars live in Crimea, making them the third largest ethnic group among the two million or so people on the peninsula, the majority of whom are Russians and Ukrainians. The Tatars lived on the peninsula long before the Russians conquered it in the 18th century.

In 1944, towards the end of the World War II, Soviet leadership under Joseph Stalin deported more than 180,000 Crimea Tatars to Central Asia. It was claimed at the time that they had collaborated with their German occupiers. Thousands died during the deportations. The Crimean Tatar singer Jamala will represent Ukraine at this year's Eurovision Song Contest (ESC) in Stockholm with a song about the historical events.

Most Tatars returned to their original homeland in the late 1980s and 1990s. Ukraine took them in. Thus, most Crimean Tatars are loyal to Kyiv and were opposed to Russia's annexation of the peninsula from the very beginning. The Tatars advocated for continued Ukrainian leadership of the peninsula during massive demonstrations in February 2014. 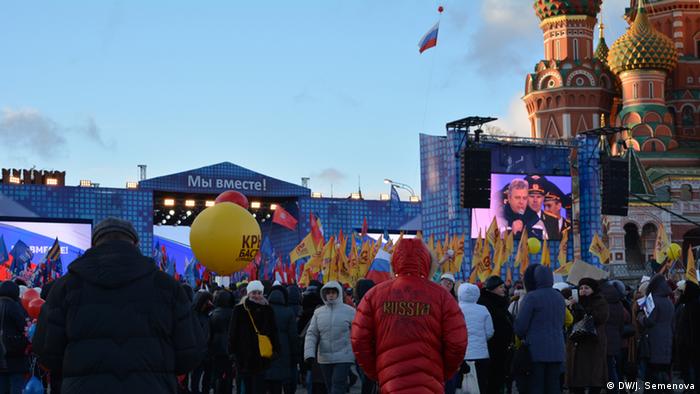 Russians celebrating the annexation of Crimea in Moscow

However, there were no rebellions by Crimean Tatars on the peninsula in the wake of its annexation. Many seem to fear new deportations. Individual activists participated in the economic blockade of the peninsula, but did so from Ukraine.

Yet the Crimean Tatar minority has come under ever-increasing pressure in the shadow of the armed conflict in Eastern Ukraine. Over the last two years there have been more and more reports of Crimean Tatars disappearing. Many have subsequently turned up dead. Human rights activists report that Russian security services regularly conduct house searches and are engaged in intimidation. In 2015, the popular Crimean Tatar television station ATR had its broadcast license revoked and was forced to move to Kyiv.

Today, the Chairman of the Mejlis of the Crimean Tatar People, Refat Chubarov, and his predecessor Mustafa Dzhemilev, both live in exile in Kyiv. Russia has prohibited them from traveling to the peninsula for five years. Arrest warrants are outstanding for them as well. Pro-Russian Crimean Tatars have announced that they intend to found a new, pro-Russian Mejlis.

Chubarov and Dzhemilev suspect that Russia is increasing pressure in an effort to force Tatars to emigrate. Dzhemilev estimates that around 20,000 Crimean Tatars have left the peninsula since it was annexed. Other sources cite much higher figures.

NATO's head has called for Washington and Brussels to continue sanctioning Russia in a bid to end conflict in Ukraine. His comments come as the Russian president visited Crimea to mark the anniversary of its annexation. (18.03.2016)