Russian warplanes have struck rebel targets thought to have been behind a toxic gas attack on Aleppo that left dozens of people needing hospital treatment. Moscow accused militants of firing shells containing chlorine. 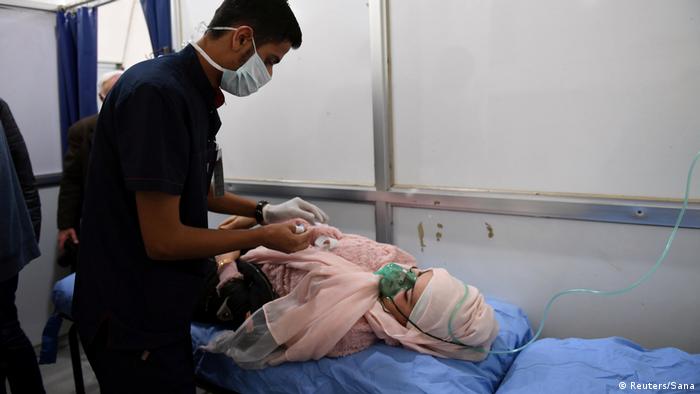 Russia on Sunday said it launched airstrikes on Syrian "terrorist" groups it accused of carrying out a chlorine attack on Aleppo the previous day.

"As a result of the strikes, all of the rebel fighter targets were destroyed," the TASS state news agency reported, citing Defense Ministry spokesman Igor Konashenkov.

More than 100 people were treated for symptoms including breathing difficulties and blurred vision in Aleppo after rebels fired shells into two regions of the city, state media said.

A doctor told Syrian state TV that at least two people, including one child, were in critical condition.

In a statement, Syria's Foreign Ministry on Sunday called on "the [UN] Security Council to immediately and strongly condemn these terrorist crimes ... (and take) deterrent, punitive measures against the nations and regimes that support and fund terrorism."

Witnesses reported a smell of toxic gas after the projectiles hit, which was also confirmed by the Observatory.

"There are often missiles on the city but this is the first time we smelled such a smell," a patient told state TV while at the hospital.

Rebels around the city rejected Russian claims that they had fired shells filled with chlorine. Rebel commander Abdel-Salam Abdel-Razak, who once served in Syria's chemical weapons' program, said the militants did not have gas-based ammunition or the capability to launch gas-filled shells.

"These are lies," Abdel-Razak tweeted in response to reports of a rebel gas attack.

Aleppo was retaken by government forces in 2016, following years of siege. Despite a subsequent truce brokered by Turkey and Russia, rebels have intensified their shelling of the city in recent weeks. The government has responded by launching attacks on rebel positions elsewhere in Aleppo province.

The government and the numerous rebel factions have traded accusations of chemical weapons use since the conflict broke out in 2011. Last year, a suspected government attack killed around 100 people in the town of Khan Sheikhoun prompting the US to fire Tomahawk missiles at Syrian government forces. This strategy was repeated following the Douma chemical attack in April, also blamed on the Syrian government.

Twelve children and several adult civilians have been killed in clashes between rebel and regime forces, a monitor says. The deaths come as the Syrian regime steps up its bid to oust opposition fighters from the city. (20.11.2016)