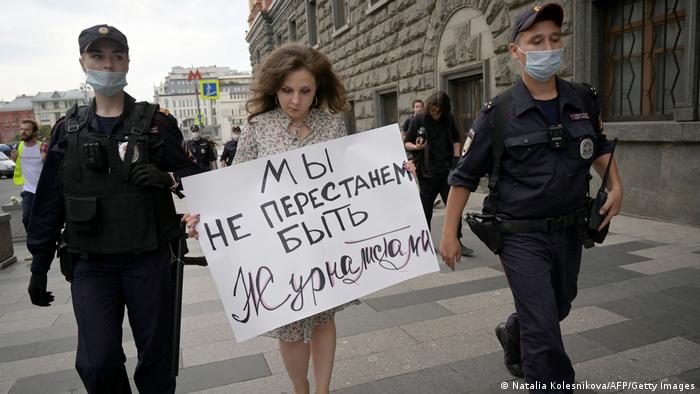 Authorities charged the reporters with breaking picketing rules during a demonstration outside the FSB security agency in the Lubyanka Square of Moscow.

Why were the journalists angry?

The decision gives authorities powers to further scrutinize the news outlets' activities, undermining their content and making it harder for them to get advertising.

Dozhd bosses said they would appeal the decision they saw as unfair.

The independent TV channel has regularly reported about Russian crackdowns on dissent, the Alexei Navalny case and anti-government demonstrations.

The angry reporters protested with slogans like "Journalism is not a crime" and "You are afraid of the truth" before police led them away.

What did reporters say?

"The fact that we don't want to write stories that other pro-government media do doesn't mean that we are some 'foreign agents,'" Yulia Krasnikova, a Vazhnye Istorii reporter said.

"I'm against labeling the TV channel Dozhd as a 'foreign agent,'" said Farida Rustamova, a Dozhd journalist who was outside the FSB headquarters on Saturday.

"I don't want my colleagues to be arrested, searched and labeled as an 'enemy of the people' or 'agents,'" Rustamova added.

The arrested journalists were given court dates for violating rules of holding pickets, an offense that can be fined by upto $270 (about €230).

Russia's controversial classification of 18 organizations and 25 people as "foreign agents" comes as the country gears up for parliamentary elections on September 19.