The Foreign Ministry in Moscow has said Israeli airstrikes in Syria, if confirmed, would constitute "a grave violation of the UN charter." A US newspaper reported that officials in Washington were forewarned by Israel. 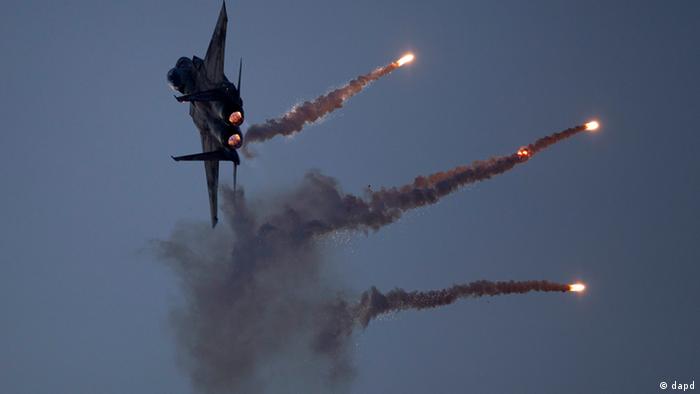 Russia's Foreign Ministry said on Thursday that it was urgently investigating reports of Israeli airstrikes in Syria (note: the Israeli jet pictured above is taking part in a December display in Israel), saying the attack would be a breach of international law.

"If this information is confirmed, this would be a grave violation of the UN charter," the ministry wrote in a statement.

The government in Moscow has largely supported Syrian President Bashar Assad during the 22-month conflict, and also reiterated its opposition to outside intervention in the country in Thursday's statement.

Arab League chief Nabil Elaraby also said that the reported Israeli airstrike on Syria was a "flagrant aggression and a glaring violation" of the country's sovereignty.

"Silence of the international community about Israel's bombing of Syrian sites in the past encouraged it to carry out the new aggression, taking advantage of political and security deterioration in Syria," Elaraby said in a statement.

Lebanese movement Hezbollah was even more vocal, saying the attack showed the "conspiracy against Syria that has been going on for the past two years." Most Western media reports said the Israeli strikes targeted a consignment of weapons that were being transported into Hezbollah territory in Lebanon. The Syrian army, meanwhile, spoke of airstrikes on a "scientific research center" near Damascus.

The Israeli government has not commented on the attacks amid multiple media reports on the matter, though Tzahi HaNegbir of the ruling Likud party spoke in more general terms about concerns of high-tech weapons reaching Hezbollah.

A coffee between enemies

The Munich Security Conference has been an annual fixture in the calendar of global decision-makers for the past 50 years. Once again, this year promises a heady mix of urgent issues and high-profile speakers. (31.01.2013)

The New York Times, meanwhile, reported on Thursday that US officials had said they were informed in advance about an Israeli strike in Syria. The paper said the officials had spoken on condition of anonymity and offered no direct quotes on its online portal. The US State Department has not commented on the matter.