Russian Prime Minister Vladimir Putin and his Polish counterpart Donald Tusk on Wednesday mourned the 22,000 people murdered by Russian forces in the Katyn Forest in World War II. It was the first joint commemoration. 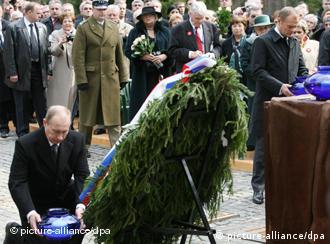 Putin stopped short of an apology for the Katyn massacre

The Russian and Polish prime ministers marked a turning point in diplomatic relations as they stood side by side to honor the 22,000 people killed by Soviet forces in Katyn Forest in 1940.

Both leaders laid wreaths at a memorial for the Polish officers and intellectuals that were killed. They also shook hands as a gesture of reconciliation.

A big step for Russia

Although Putin stopped short of the outright apology that Poland wanted to hear, he acknowledged that Russia had long denied the truth about the atrocities committed. 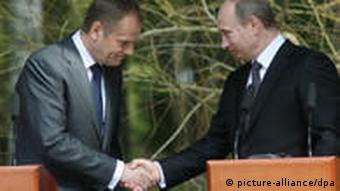 Putin has urged reconciliation between Russia and Poland

"A lie was told for decades, but we cannot blame the Russian people for it," he said at the ceremony.

He insisted that "inhuman totalitarianism" was responsible for the "martyred death of both Soviet citizens and Polish officers."

Tusk emphasized that Russia's hosting of the ceremony had a "very important symbolic aspect."

“Are we able to put violence and lies behind us and turn toward reconciliation? If we do, it will be a victory for the soldiers who were killed in Katyn,” he said.

Putin and Tusk listened to Christian, Jewish and Muslim prayers for the dead at a monument in the Katyn forest in western Russia, where the Soviet secret police shot some 22,000 Polish officers and buried them in mass graves.

The two leaders also laid the cornerstone for a new Russian Orthodox church at the site of the massacre.

For years, Soviet propaganda had blamed the massacre on Nazi Germany. It was only in 1992 that the then-President of Russia, Boris Yeltsin, released evidence proving Soviet responsibility.

While most commentators in Poland are optimistic about Tusk and Putin’s resolve to mend bridges, some also point out that Prime Minister Tusk is not the only Polish leader to visit Katyn Forest this week. President Lech Kaczynski is planning a separate ceremony at the site over the weekend.

Critics say Kaczynski has sent Polish-Russian relations to an all time low in recent years by dragging up the past and raising the spectre of Russian and German encroachment into Poland.

Now in the middle of a presidential campaign, Kaczynski is again expected to use the memory of Katyn to appeal to his nationalist voters 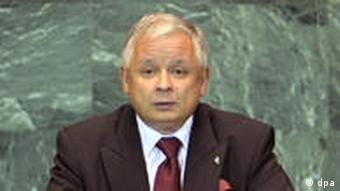 The Polish president was not invited to the ceremony

"It fit wonderfully in establishing Poland as the victim of the twentieth century, and it's a policy of demands, which to my mind is a mistake," he added.

After the ceremonies at the Katyn cemetery, Putin and Tusk were to hold talks in nearby Smolensk during a meeting of a joint task-force on "difficult issues" in bilateral relations.

Moscow is worried about Poland's decision to allow US Patriot missiles on its soil and its possible involvement in a new US missile shield.

Warsaw, meanwhile, is opposed to the Russian-German NordStream gas pipeline project, which bypasses Poland, so that the country loses out on transit earnings.

Russia and Poland are jointly commemorating the thousands of Poles slaughtered by Soviet secret police in 1940. But it's only recently that Russia has confronted one of the darkest chapters in its history. (06.04.2010)

Opinion: Putin's visit to Katyn is itself an historic event

On Wednesday, Russian Prime Minister Vladimir Putin and his Polish counterpart Donald Tusk will meet to remember the massacre at Katyn 70 years ago. DW's Bartosz Dudek calls this a milestone for Russian-Polish relations. (07.04.2010)

Soviet troops murdered some 22,000 Polish officers in a Russian forest in 1940 and blamed the atrocity on Nazi Germany. It remains a painful chapter in relations between Moscow and Warsaw. (06.04.2010)

Reconciliation over the Katyn massacre is still a controversial subject (07.04.2010)