Russia and China have pledged to expand cooperation, particularly in the energy sector. An agreement on a second route to supply China with Russian gas gives Moscow a boost amid EU and US sanctions. 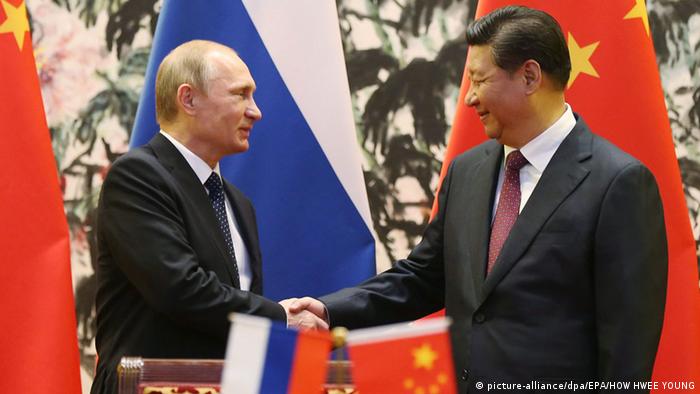 The leaders of China and Russia on Sunday pledged to enhance mutual cooperation, notably in the field of energy, at a meeting in Beijing ahead of next week's Asia-Pacific Economic cooperation (APEC) summit.

News reports said that Russian President Vladimir Putin and his Chinese counterpart Xi Jinping signed 17 documents relating to cooperation in the natural gas sector. Other deals signed in their presence included a memorandum on mutual understanding between Russia natural-gas giant Gazprom and the China Offshore Oil Corporation (CNOOC), and a number of banking agreements.

"Whatever changes happen in the international situation, we should follow the chosen line, should expand and develop the overwhelming mutually advantageous cooperation," Xi was quoted as saying by the Russian Itar-Tass news agency.

Putin said cooperation between Russia and China was "extremely important," the agency reported.

One of the major agreements struck at the meeting concerns a second major route to transport Russian gas to China via Siberia, following an initial $400-million (321.2-million-euro) deal signed in May on an eastern route.

The deals give Russia a welcome boost as it continues to suffer economically under sanctions imposed by Washington and the European Union over its alleged role in the Ukraine crisis.

The meeting was the tenth between the two leaders since Xi came to power in March 2013, according to China's official People's Daily.

Ties between China and Russia have been strengthened in recent times by their shared geopolitical concerns, including a wary stance towards the United States.

Both wield veto power on the United Nations Security Council, and often vote together, sometimes opposing Western powers on issues such as policy on the Syria conflict.

Putin said on Sunday that Russian-Chinese cooperation was "very important for keeping the world within the framework of international law, to make it more stable, more predictable."

"Together we've done a lot to achieve that, and I am sure we will work in this direction in the future," he added.

Putin is in China for the APEC summit, which starts on Monday. The meeting will also be attended by US President Barack Obama, Japan's Prime Minister Shinzo Abe and other leaders.

China wants everything to go perfectly as it prepares to receive important guests for the upcoming APEC summit. Their efforts, however, aren't appreciated by all in Beijing, says DW's Frank Sieren. (09.11.2014)