Chinese President Xi has told a gathering of business leaders that his country's economy offers "lasting and infinite promise." Beijing is using its APEC host status to assert its ambitions as a leader in the region. 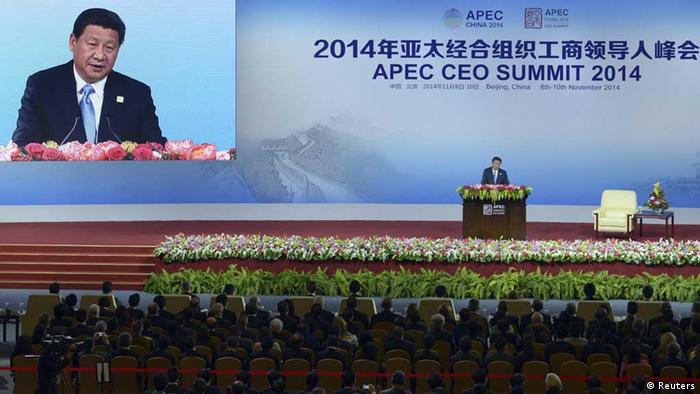 In a speech to business and political leaders in Beijing on Sunday, President Xi Jinping touted the benefits of Chinese development and described his vision of an "Asia-Pacific dream" based on a "shared destiny" for the region.

"For the Asia-Pacific and the world at large, China's development will generate huge opportunities and benefits, and hold lasting and infinite promise," Xi told the gathering, ahead of the two-day Asia-Pacific Economic Cooperation (APEC) summit which kicks off in the Chinese capital on Monday.

Beijing last hosted the event in 2001, and it's seizing the opportunity to promote its credentials as the world's second largest economy and a leader in the region.

"We have the responsibility to create and realize an Asia-Pacific dream for the people of the region," Xi said.

As "China's overall national strength grows," he added, it would focus on "managing its own affairs well" while looking to "bring more benefits to the Asia-Pacific and the world."

China's outbound investment would exceed $1.25 trillion (1 trillion euros) over the next 10 years, Xi told business leaders, adding that the country would import more than $10 trillion in goods and send more than 500 million tourists abroad in the next five years.

Next week's APEC summit will be attended by leaders from the forum's 21 member countries, including US President Barack Obama, Russian President Vladimir Putin and Japanese Prime Minister Shinzo Abe.

One of the top items on the agenda is expected to be a Beijing-backed free trade initiative for the region - known as the Free-Trade Area of the Asia Pacific (FTAAP) - widely seen as an attempt by China to counter US domination of global trade.

The US is also promoting its own regional trade pact, the Trans-Pacific Partnership (TPP), which excludes Beijing and is part of Washington's strategic "pivot" to Asia.

The APEC group accounts for 40 percent of the world's population and almost half of its trade.

As part of another initiative aimed at increasing China's influence in regional and international trade, President Xi on Saturday pledged $40 billion for a "Silk Road Fund" to boost trade ties between Asian nations. He made the announcement following a meeting with leaders from Pakistan, Bangladesh, Cambodia, Laos, Mongolia, Myanmar and Tajikistan in Beijing, state news agency Xinhua reported on Sunday.

The fund will finance infrastructure and cooperation in industry to increase connectivity across Asia, Xi said.

"Efforts by a single or several countries are far from adequate," Xi was quoted by Xinhua as saying. "Only by building extensive partnerships where all will think and work in unison can we expect to achieve positive results."

Last month, China and 20 other Asian governments launched a $50-billion Asian Infrastructure Investment Bank to finance infrastructure in the region - a move the US objected to, saying such work was already being done by the World Bank.

China wants everything to go perfectly as it prepares to receive important guests for the upcoming APEC summit. Their efforts, however, aren't appreciated by all in Beijing, says DW's Frank Sieren.

Japan and China say they want to work on improving bilateral ties that have been troubled by a territorial row and regional rivalry. Media reports even speak of a possible first summit between the countries' leaders. (07.11.2014)

Asia Pacific finance ministers have gathered for a meeting in Beijing to debate ways of avoiding a protracted slowdown of regional economies. APEC representatives identified a number of threats to further growth. (22.10.2014)