Russia accuses Erdogan of benefitting from IS oil

The Russian army has accused the Turkish president of benefitting from the purchase of 'Islamic State' oil. It has also presented alleged evidence of Turkey's massive trade with the militant group. 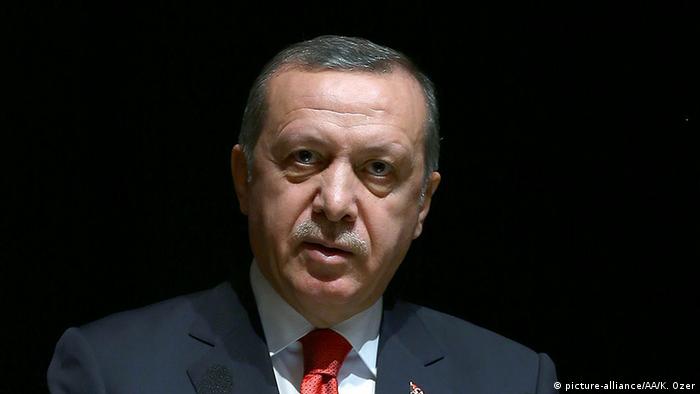 "According to available information," Antonov said, "the highest level of the political leadership of the country, President Erdogan and his family, are involved in this criminal business." He was speaking to a room of foreign military attaches and Russian media on Wednesday.

"We know the price of Erdogan's words," Antonov continued, in response to the Turkish president's denial and promise to resign if it were proved true. Turkish leaders "won't acknowledge anything even if their faces are smeared with the stolen oil."

The harsh words are the latest in a heated spat that began when Turkey shot down a Russian fighter jet destined for Syria last week, claiming it violated Turkish airspace. One Russian pilot was killed, and a Russian marine died trying to rescue the second pilot.

Erdogan responded to the accusation on Wednesday by rejecting Russia's right to "slander" Turkey with such claims. However, he sought to calm the tension, as "adding fuel to the flames is to no one's benefit."

Russian President Vladimir Putin, who has called the downing a "planned provocation" and "stab in the back" by Ankara, accused Turkey on Monday of shooting down the plane to protect oil supply lines with the Islamic State.

Russia has sought to lead the charge in weakening the Islamic State by cutting off its financing sources. Antonov estimated that IS makes $2 billion (1.9 billion euros) from its oil trade.

"This oil enters the territory of Turkey in huge quantities, on an industrial scale along a living pipeline of thousands of oil tankers," Antonov said. Defense ministry officials showed journalists satellite images that they claimed depicted thousands of trucks carrying oil from areas of Syria and Iraq under IS control.

No proof was provided though to substantiate the claim of the direct involvement of Erdogan and his family.

"If such a thing is proved," Erdogan said on Monday, "the nobility of our nation would require that I would not stay in office."

Also on Wednesday, US Secretary of State John Kerry said that Erdogan was in "complete agreement" with plans to close a 98 kilometer (60 mile) stretch of Turkey's border that abuts areas controlled by the Islamic State.

The US has earlier suspected that middlemen in Turkey have been buying oil from IS territories. It hopes that closing the border will help sever smuggling ties.

Jitters in Russia as Putin pledges to punish Turkey

President Vladimir Putin has ordered a severe curtailment of bilateral relations with Turkey after the downing of a jet. Russians are worried about the consequences, Juri Rescheto reports from Moscow. (01.12.2015)