Russia accuses Bangladesh media of ′bias′ on Ukraine war coverage | Asia | An in-depth look at news from across the continent | DW | 15.03.2022

In an open letter, the Russian embassy in Dhaka has accused newspapers and broadcasters of "undermining" relations between Russia and Bangladesh. 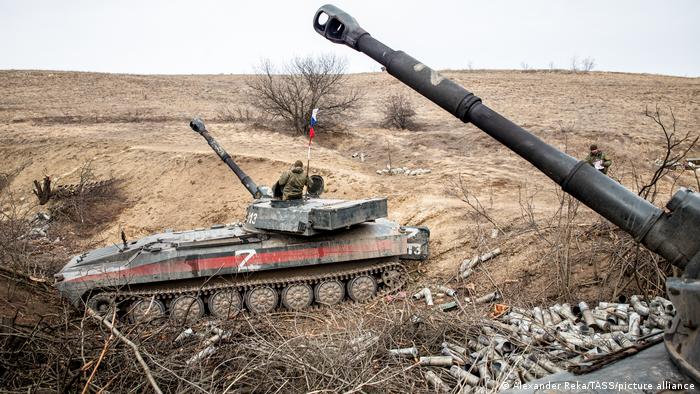 In an open letter sent to Bangladeshi media editors on Sunday, Alexander Mantytskiy, the Russian ambassador to Dhaka, claimed that Bangladeshi media outlets were echoing "anti-Russian propaganda" from Western media motivated by "bias, prejudice and even hatred towards Russia."

The four-page letter, which the ambassador signed, outlined the Russian government's perspective on the Ukraine war. He claimed that the current stance of Bangladeshi media outlets on the war was part of an ongoing effort by the West to distance Moscow and Dhaka. The letter did not name any specific media outlets, or cite examples of biased coverage.

"I consider the biased approach of certain Bangladeshi media towards the situation in Ukraine, and Russia's actions there, as a result of deliberate efforts by those forces that have always sought to undermine mutually beneficial cooperation between the Russian Federation and the People's Republic of Bangladesh," Ambassador Mantytskiy said.

The Russian embassy in Dhaka confirmed in an e-mail to DW that the ambassador had signed the letter.

Bangladeshi media professionals have defended their coverage of the war in Ukraine as fact-based and unbiased.

Golam Mortoza, the editor of the Dhaka-based Daily Star Bangla newspaper, emphasized that an ambassador of a foreign country should not tell Bangladeshi journalists how to do their jobs.

"The wording of the letter by the Russian ambassador sounds like he was prescribing what we should write or what sources we should use. Such dictation from an ambassador is unacceptable," he told DW.

"Had the ambassador been referring to a particular report and provided information, it would have been a professional reaction," Riaz said.

"Bangladeshi media are providing critical analyses of the situation along with information provided by Western news sources," he said.

"Notwithstanding the general observation that media everywhere tend to have a proclivity towards agenda setting, various Bangladeshi media have published analyses from international media that have explored Russian arguments for the invasion," he added.

In the letter, Mantytskiy compared the intervention of the Soviet Union in Bangladesh's war of liberation in 1971 with Russia's current invasion of Ukraine, which Moscow claims is aimed at "liberating" the Russian-speaking population in the eastern Donbas region in a similar way Bangladesh fought for independence.

Analyst Riaz said comparing the 1971 war of independence in Bangladesh with the situation in Eastern Ukraine is highly problematic.

"The ambassador's reading of Bangladeshi history is skewed and erroneous. It omits the history of economic disparity between East and West Pakistan and the democratic process that legitimized the declaration of independence," Riaz said.

"Most importantly, it ignores the contributions of the freedom fighters who fought valiantly for months against the Pakistani occupation force. Moral and material support of India, the then USSR, and others have helped the freedom fighters. However, Bangladesh emerged as an independent country because of a war fought by its people," he added.

Editor Mortoza said the two events have no basis for comparison.

"Russia has invaded Ukraine ... Russia still has no right to attack and bomb an independent country and make millions of people homeless," he said.