Rubbish Managers Say Germans are Number One in Recycling | Germany | News and in-depth reporting from Berlin and beyond | DW | 14.05.2007

Rubbish Managers Say Germans are Number One in Recycling

Some people say no one likes to separate their trash as much as Germans -- even troops stationed in Afghanistan are reported to separate their rubbish. It's a chacteristic that trash pleases trash management companies. 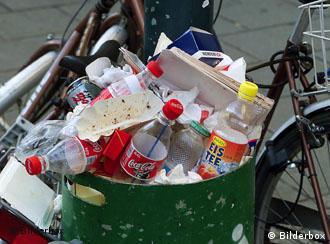 Separating packaging from trash is no easy matter

Separating trash for recycling is no easy matter. For one thing, it's sometimes difficult discerning whether the trash in your hand is actually packaging, glass, paper, hazardous or organic waste. What bin do you use when packaging includes both cardboard and plastic?

But after you've gone through the trouble of washing your hands of your many types of rubbish, you can at least know it's worth it -- economically, as well as for the planet.

Dealing in trash makes good business sense. Waste management has become a major industry in Germany -- with 250,000 employees in the sector, and the rubbish people throw away also generates turnover of 50 billion euros ($67.7 billion).

So what's the point?

"I do try to recycle," said one woman. "I put paper in the blue recycling bin, yoghurt containers and tin foil in the yellow bins for packaging, and we also recycle bottles." 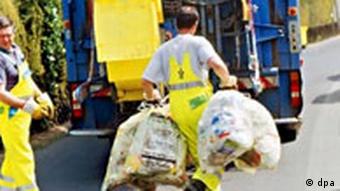 Another woman said she's made a conscious choice not to throw plastic in the packaging recycling bin.

"You're supposed to clean out yoghurt containers, but that uses a lot of water, and I don't think it's a good idea to waste so much," she said. "Besides, people say anyway that everything is thrown back together again and then burned at the incineration plant."

In the western German city of Cologne, for example, the packaging thrown into recycling bins lands in the hands of Remondis, a collection company, then taken to a facility, where the so-called "DSD" trash is sorted. Visiting the Remondis plant, you'll find a mound of trash consisting of yoghurts cups, plastic wrapping and aluminum cans.

In 1991, a special German packaging ordinance came into force and required product manufacturers and vendors to take back packaging once the products have been used and arranged for their recycling. DSD organizes this system. 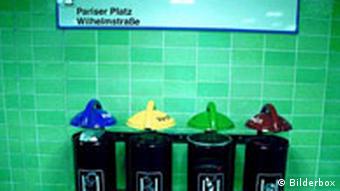 How to sort your rubbish in the Berlin subway?

Packaging marked what is called the Grüner Punkt or green dot is part of this system. Only packaging with the green dot is supposed to be placed either in special yellow plastic bags placed outside for pickup, or placed in yellow recycling containers.

Refuse companies say that in international comparisons, Germans are number one in recycling their packaging. But the figures are disputed.

According to DSD, largely a monopoly in the recycling sector, each consumer in Germany recycles around 76 kilograms (167 pounds) of packaging a year.

Critics say that translates into about 30 items of packaging per day, which they claim is unrealistic. They estimate that on the average, each person recycles around 26 kilograms of DSD trash annually.

But does everyone separate properly? Do they put only "green dot" product wrappings in the yellow bags and boxes?

Jürgen Lennertz, director of the Remondis plant in Cologne, said that "people throw from 30 to 50 percent of packaging without the green dot into the yellow containers."

What is thrown in there is everything from plastic pots for plants to garden hoses. Udo Koch, Remondis operations manager, hit the point home with the rhetorical question: "Now is that packaging?"

The good news is that modern sorting machines can recognize and categorize about 90 percent of rubbish, leaving about 5 percent to be sorted by hand.

So machines do help Germans be international leaders in divvying up their trash. Koch said there is a reason for it all. 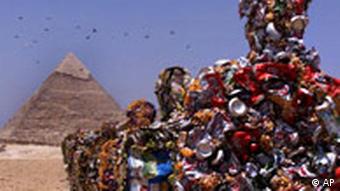 HA Schult has made art out of trash

"I think a lot of people are thinking about the climate right now," he said. "The amount of energy necessary to recycle product wrappings is much less than what you need to produce the packaging in the first place."

Critics, however, disagree. They say more energy is needed to recycle smaller wrapping items than to generate them.

Either way, around 50 percent to 70 percent of the "yellow bin content" can be recycled.

The rest, which cannot is incinerated, also generates energy. The Cologne-based AVG, a waste management and incineration company, said it could pass along 400,000 megawatts of power and 230,000 tons of steam to the energy industry in 2006 resulting from waste incineration.

A Recycled Bottle Story: From Drink Container to Winter Sweater

Ever wonder what happens to all those plastic bottles the Germans seem to be perpetually recycling? Well, you could be wearing them. German waste combines with Chinese know-how to create clothing from old plastic. (30.12.2006)

The high cost of raw materials is encouraging Germans to recycle even more than they already do. They're saving money, not to mention the environment, and other countries are looking to follow in their footsteps. (09.07.2006)

Getting Rid of All That Junk

Germans who live in the vicinity of a recycling container have sensed it all along -- Germany is world champion in the science of waste recycling. But how successful is the country really in reducing trash? (06.07.2002)