At Auschwitz, Roma and Sinti from 25 European countries have commemorated the 70th anniversary of Nazi Germany’s attempted genocide of their race. On August 2, 1944, nearly 2,900 Roma and Sinti were gassed at the camp. 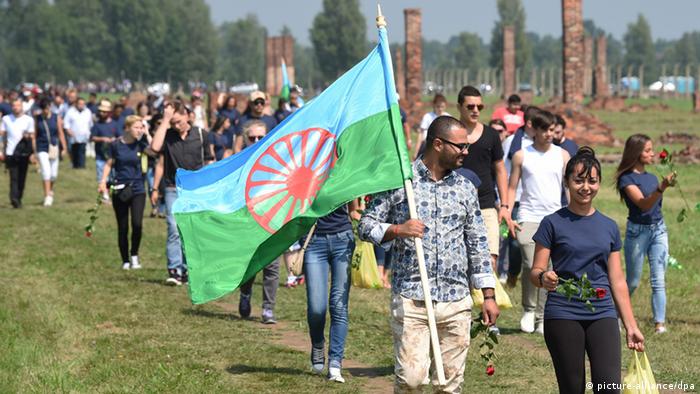 Saturday's ceremony of International Roma Genocide Remembrance Day commemorated the murder of an estimated 500,000 people belonging to the minority. The event also helped draw attention to continued violence and discriminatory laws that affect about 12 million people in Europe.

Right-wing racists and mainstream politicians alike have attacked the minority both physically and with populist rhetoric, said Romani Rose, the president of the German Central Council for Sinti and Roma. Recent years have seen several violent attacks in places such as Hungary and France as well as widespread racism across Europe, including in Germany. In 2007, Roma and Sinti leaders appealed to the United Nations for help protecting the minority's rights in the many countries in which its people live.

"In many European countries, Sinti and Roma continue to serve as the scapegoats," Rose told the roughly 1,000 people at Saturday's ceremony - from Holocaust survivors to activist youth groups. Rose added that hate speech is "echoed up into the center of society," and that "even parties within governments use populist rhetoric to win points at the expense of our minority."

Named in German after the town of Oswiecim, just outside of Krakow in Poland, Auschwitz-Birkenau was the Nazis' largest death camp. The majority of the 1.1 million people killed there were Jews from Poland and other European countries. The Nazis killed more than 23,000 Roma and Sinti from 11 different countries there.

Poland has officially marked August 2 as a national commemoration of the genocide of Roma by Nazi Germany since 2011.