The head of Germany's Central Council for Sinti and Roma told DW-WORLD.DE that not enough is being done to root out the causes of prejudice in Europe. He said many Sinti and Roma integrate by denying their ethnicity. 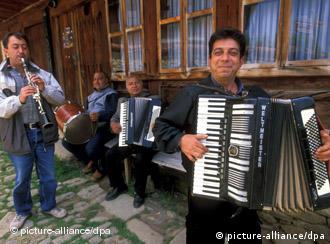 Musicians begging on the street, is still a stereotype of Sinti and Roma, Rose said

Romani Rose is the head of the German Central Council for Sinti and Roma. He has fought for official recognition of the Sinti and Roma suffering under the Nazi government. Thirteen of his family members were murdered in death camps.

DW-WORLD.DE: Czech neo-Nazis want to resettle 200,000 Roma in India and in Italy authorities are fingerprinting all Sinti and Roma on the basis of their ethnicity. Arson occurs at Sinti and Roma camps. The German Central Council for Sinti and Roma has said racism is growing. Are Sinti and Roma the new scapegoats of the European Union? 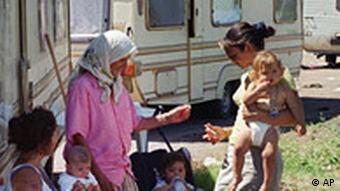 Life for some Roma is more like Bangladesh than Europe, Rose said

Romani Rose: At the moment we are experiencing a frightening development. The most recent events in Italy make that clear. The measures taken by Berlusconi's administration in declaring a state of emergency and other steps are a clear breach of the EU Treaty. Sinti and Roma are EU citizens. The causes of the problems lie with municipal Italian government that allows slums to arise. When a few thousand people without any chance of improving their lot in life live on the edge of the city in indescribable conditions, it naturally worries the population. But latching on to the problem and using it in an election campaign as the Lega Nord did by using minorities to make the majority of people feel afraid -- that's something I hadn't thought could still be possible in Europe.

The Italian parliamentary president has made general, racist comments aimed at Sinti and Roma. That would be unimaginable in Germany. Discrimination and racism exist here too, but abusing the difficulties facing a minority to turn people's attention from other issues is something I think has been made impossible by 60 years of dealing with our history.

Why are so many Sinti and Roma leaving their homes in Romania and Bulgaria?

Massive discrimination in all areas of life -- from education to work to living -- is the main reason. We are in dire need of education and infrastructure projects there. The problem is that these people do not have any status. They don't exist and don't have any chances for the future. They are living in degrading conditions. No water, no electricity -- it looks more like Bangladesh than Europe. The living situation is a major problem. The people don't have a chance to get a job. Much of what's happening reminds you of apartheid South Africa. In Hungary, the Czech Republic and Bulgaria the Sinti and Roma are kept out of the education system. The children are not allowed to go to regular schools and have to attend schools for the mentally handicapped -- or there are schools with poorly educated teachers and less teaching material. That's the real problem.

The EU has spent a lot of money and called for a decade of integration in the new member countries -- reports say as much as 11 billion euros ($16.5 billion). 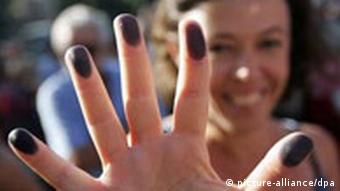 Instead of holding conferences, the EU should put in place measures that would really improve the situation. Measures that would address the causes of the problems that make many people take flight. During the EU's expansion, we did not pay attention to the fact that each nation has the responsibility to fight against racism and discrimination. This is still on the agenda in Romania and Bulgaria. In this case, I really have to reprove the EU commissioners, including people like Mr. Verheugen. The new EU countries are obliged to do enough when it comes to laws protecting minorities. When citizens are put into different categories because they belong to a different ethnic group, you simply have to call that racism. The current programs to fight it have not been effective and have hardly reached the people affected. A minority cannot be given advantages the majority doesn't have, but we have some catching up to do in the interest of equality.

Many Germans are worried about the migration of mainly poor people from Romania and Bulgaria since the EU expansion. People think Sinti and Roma are going to end up washing windows at traffic lights, playing music for change on the street and joining bands of thieves.

I'm, of course, familiar with the complaints about harassment. This mainly has to do with refugees from Romania and Bulgaria who are used to much worse than the discrimination they face here. No one enjoys leaving their home. We have to solve the problems there. 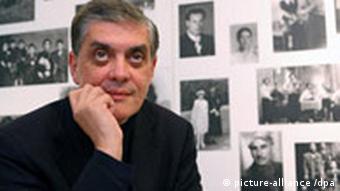 In Germany many Sinti and Roma have to deny their ethnicity, Rose said

In Germany we've been integrated for 600 to 700 years. But integrated often means people lie about their ethnic affiliation because they think that they will be able to evade the deep set stigmatization. The pictures of antiziganism are still very alive. That forces our people to live in anonymity though they are involved in all aspects of life -- everything from politics to sports. Our goal is that they can talk about the minority they're a part of. National and cultural identity should not be put into opposition with each other. That has to be realized as a part of democracy. Public criminalization simply scares German Sinti and Roma. We have had and EU-wide experience of antiziganism. It wasn't invented by the Nazis, but it led to their program of annihilation. That's why it is hugely important to us that, in our legal system, people have to answer for their own acts. Generalities based on ethnicity cannot be permitted. Germany in particular has a responsibility to make sure that doesn't happen. There is a clear instance of this in history when the Reich's interior minister Frick ordered non-Aryans' race be emphasized in court sentencing. This is what makes a constitutional state different from a dictator. An overwhelming portion of the media has realized this and acts accordingly.

Is it possible to call Europe's Sinti and Roma a united group?

What holds us together is a shared experience of persecution and assassination during the Holocaust. Sinti and Roma were methodically found, carried away and murdered in all 11 of the countries occupied by the Nazis. And it was solely because of their ethnicity -- just like with the Jews.

Yes, it is. As far as antiziganism is concerned a more open form of rejection is accepted. When it comes to anti-Semitism the consequences quickly become more serious. I hope that a similar sensibility takes effect. It would help our coexistence with larger society when policies made it clear that a historical sense of responsibility is indivisible. The National Socialists' goal of destruction applied equally to both minorities. In 2009, a memorial to the murdered Sinti and Roma is going to be dedicated across from the Reichstag, hopefully awareness will also grow. This isn't about placing blame but about responsibility for the present.

At the beginning of August, parallel to the issuing of German state report, you presented another report to the UN Convention on the Elimination of All Forms of Racial Discrimination. The police, in particular, are accused of discrimination.

We expressed that we wanted the German government to distance itself discriminatory comments made by the deputy director of the association of German detectives. In an association publication he said the Sinti and Roma felt they could "live off the fat of the affluent society" and took "persecution during the Third Reich as legitimizing for theft and social parasitism." The premiers of Bavaria and Brandenburg, Beckstein and Platzeck, have distanced themselves from the statement, but we think it's sad that prosecutors saw it as covered by freedom of expression. From our point of view it was defamatory and inciting. It's jargon out of the Nazi-era -- Goebbels also compared us with animals. Just imagine that a similar statement would be made about the Jewish minority. The association of German detectives has not distanced itself from the comments. We find that frightening so we took our concerns to the German parliament as well as Interior Minister Wolfgang Schaeuble to put a set of suitable guidelines on what is appropriate for German police.

Representatives of the Sinti and Roma communities called for more effective measures from the European Union to protect minorities at a ceremony in the former Nazi concentration camp of Auschwitz. (03.08.2008)

Sinti and Roma Holocaust survivors and their grandchildren are visiting the former death camp in Auschwitz this week as part of an educational trip designed to raise historical awareness among the younger generation. (31.07.2008)