Special Counsel Robert Mueller has submitted his report on the Donald Trump campaign and potential Russian involvement in the 2016 election, according to US officials. The report has not yet been made public. 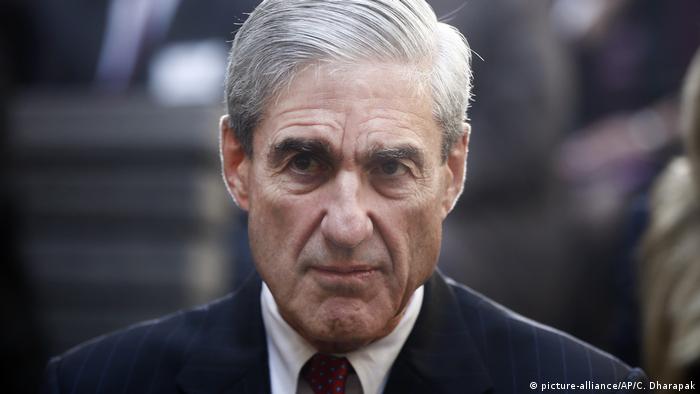 Special Counsel Robert Mueller has submitted his long-awaited report on US President Donald Trump's 2016 election campaign, the US Justice Department said on Friday.

Former FBI chief Mueller has been investigating Trump and his aides' alleged Russian links and obstruction of justice for nearly two years. The report should provide deep insights into the actions of Trump's aides and possibly even the president himself.

In a letter to US Congress, Barr said he was committed to "as much transparency as possible."

The White House said it has "not received or been briefed on the Special Counsel's report."

Senate Majority Leader and Republican lawmaker Mitch McConnell said he hoped Barr would "provide as much information as possible" as soon as he could. In a separate statement, Congressman Doug Collins, the top Republican on Congress' Judiciary Committee, said Mueller's report should be released to the public "without delay."

Top Democratic lawmakers Nancy Pelosi and Chuck Schumer also called for the full report to be released to the public. "The American people have a right to the truth," they said in a statement.

They also said that Barr "must not give President Trump, his lawyers or his staff any 'sneak preview' of ... Mueller's findings or evidence." The statement came just before Trump lawyer and former New York mayor Rudy Giuliani said Trump's legal team wanted to have an early look on Mueller's report before its public release.

Potentially explosive: The full contents of the report are unknown at this point; however, the probe has already triggered felony charges against six people who served on Trump's campaign team, as well as 28 other individuals. Both Trump and the Russian government have denied any wrongdoing. The US president has repeatedly described it as a "witch hunt."

What did the investigation cover? Robert Mueller was authorized to look into "any links and/or coordination between the Russian government and individuals associated with the campaign of President Donald Trump." He could also investigate "perjury, obstruction of justice, destruction of evidence, and intimidation of witnesses" committed against his own probe, as well as other matters triggered by the investigation.

Who has been implicated in the probe?

Several key Trump aides already faced court over the alleged Moscow links. Trump's former campaign chief Paul Manafort was found guilty of lying to prosecutors about three matters concerning the Russia probe, including his contacts with Russian national Konstantin Kilimnik. Mueller's team believe Kilimnik to be an agent of the Kremlin. US prosecutors claim Manafort also tried to hide millions of dollars he was paid by pro-Russian politicians, for whom he worked as a political consultant, in Ukraine.

Michael Flynn, Trump's appointee for national security adviser, admitted to lying to the FBI about his contacts with the Russian ambassador at the time. Flynn misled the agents by claiming that he never discussed US sanctions on Russia with the envoy.

Trump's longtime aide Roger Stone has been charged with sharing advance information about the Wikileaks release of hacked Democratic Party emails. US officials believe the emails were stolen by Russia. Stone has denied wrongdoing.

Following the submission of the report on Friday, US media widely reported that Mueller and his team did not recommend any new indictments.

Will the report be released? The decision about sharing the report with the public rests with Attorney General Barr. Earlier this month, US lawmakers unanimously approved a non-binding resolution demanding the report be released. Some Democratic lawmakers have speculated about issuing a subpoena to Mueller and requesting the final report. In that case, Trump would have the option of ordering the Justice Department to defy the move, taking to fight to the courts. On Friday, US House Intelligence Committee head Adam Schiff told CNN that his committee would need to subpoena Mueller or others if US lawmakers are not given underlying evidence used for the Mueller report.