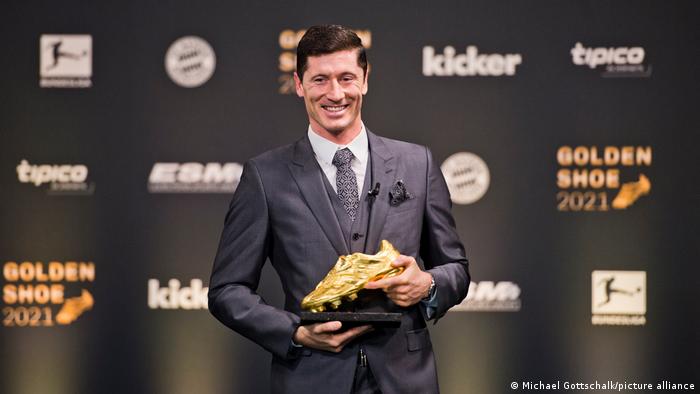 After a season in which he outscored six Bundesliga clubs despite missing a month through injury, Robert Lewandowski has been awarded the European Golden Shoe for his record–breaking 41 goals in the 2020–21 Bundesliga campaign.

"I'm very proud, very pleased," he said after receiving the award at a ceremony at the club museum in the Allianz Arena in Munich on Tuesday, adding that he still couldn't believe he had actually surpassed Gerd Müller's 40 goals from the 1971–72 season.

"I have to say thank you to my wife. She is a great support for me and a motivation when things get a bit worse," said the 33-year-old, whose wife, Anna, was among the select guests. "He is a wonderful person, athlete, partner, friend and husband," she said, "I am so proud of him."

Though last term was particularly exceptional, Lewandowski has long been a lethal finisher, notching 210 league goals in 224 Bundesliga appearances with Bayern to date. His movement, physicality, nous and composure set him apart from any other striker in Germany and only the presence of Cristiano Ronaldo and Lionel Messi have prevented the Pole winning more individual honors to go with his enormous trophy haul.

The most important moments of the Bundesliga season

"When I heard that you had won the Golden Shoe, I thought: 'How? Only now?' You can see how long it takes to get to the very top. But you've been at the top for a long time and you deserve this award," said Jürgen Klopp, who coached Lewandowski at his first German club, Borussia Dortmund, by videolink.

His current boss, Julian Nagelsmann, also attended the ceremony and said his striker's "terrific performance" would be "remembered forever."

Last season was the sixth in a row in which Lewandowski passed the 20-goal mark in the Bundesliga and, with seven goals in five games already this term, he could be on to surpass his own record this time around.

After winning the FIFA Best award in 2020, a year when he won the Champions League, Bundesliga, German Cup and World Club Cup with Bayern, Lewandowski seems to be improving in his mid-30s. "It's not over yet. We are still hungry for more titles," he said.