′Right-wing extremism′ behind massacre in Norway | Europe | News and current affairs from around the continent | DW | 23.07.2011

The main suspect in the Oslo terror attacks is a 32-year-old Norwegian who harbors right-wing extremist and xenophobic ideas. Psychologists and terrorism experts say such men live in a fantasy world and feel "selected." 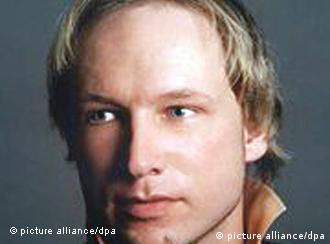 The suspect reportedly had connections to far-right groups

The now-arrested Anders Behring Breivik described himself as conservative and Christian on the Internet. He propagated nationalistic and anti-Islamic ideas, demonstrating his hatred for multiculturalism, which he believed would destroy the nation-states and Christian culture of Europe. Breivik also jousted online with "anti-fascist groups."

Just a few days ago, he published a quote from a philosopher whom he considers to be a "great hero" compared to the "spineless masses." This expression is the stereotypical extreme right-wing cliché about the martyrdom-ready leader and the masses who need to be led. On his page on social networking site Facebook, Breivik also showed an interest in war videogames, possibly evidence of his readiness to fight with bombs and guns.

The Norwegian media has reported that Breivik had connections to extreme right-wing groups. Neo-Nazis are hardly present in Norway due to internal leadership problems, according to police. But there are connections with the more active Neo-Nazi groups in Sweden.

Right-wing populists, primarily the Progress Party, fan the flames of the anti-immigration and anti-Islam debate in Norway. Breivik was a member of the youth organization of these populists 10 years ago.

Progress Party chairwoman Siv Jensen has expressed her condolences to the victims of the attack, but otherwise shows little sensitivity when she demands harsher punishments and sharper rules against immigration and warns against a creeping Islamization. Just a few years ago, she found up to 30 percent support for her anti-immigration positions, but support for such rhetoric has declined steeply in Norway recently.

The target of the terror attacks may have been the offices of the Labour Party Prime Minister Jens Stoltenberg due to his policy of an "open society." Stoltenberg and the Labor Party's youth organization apparently became the object of the perpetrator's hate.

Shock, disbelief, hurt, anger and frustration… just a few of the emotions being expressed in Oslo, Norway, as people try to come to terms with Friday's events. (23.07.2011)

A man arrested in connection with twin terrorist attacks in Norway has admitted responsibility for the bombing and shooting spree. Meanwhile, Norwegian police are focusing on the possibility of an accomplice. (23.07.2011)

In the aftermath of the twin attacks in Oslo and on the island of Uyoeta, German media analysts assumed that radical Islamists were to blame. Felix Steiner says that's a sign that acts of terror poison our thinking. (23.07.2011)

Norwegian officials said the alleged shooter was known to the police as a potentially radicalized Islamist and had a history of mental illness. Oslo's Pride parade, which was planned for Saturday, has been called off.

A Norwegian court has ordered the suspect in a deadly shooting near a gay bar in Oslo to be detained for four weeks. Police have urged that Pride events in the country be delayed amid security concerns.

Neo-Nazi Anders Behring Breivik is seeking parole after serving half of a 21-year sentence for a terrorist attack that killed 77 people in 2011. A psychiatrist has said he is still dangerous and "you cannot trust him."