Non-EU migrants could find it harder to enter Britain under policies outlined in a pre-election manifesto drafted by the prime minister's Conservatives. The document is being published ahead of a June 8 snap election. 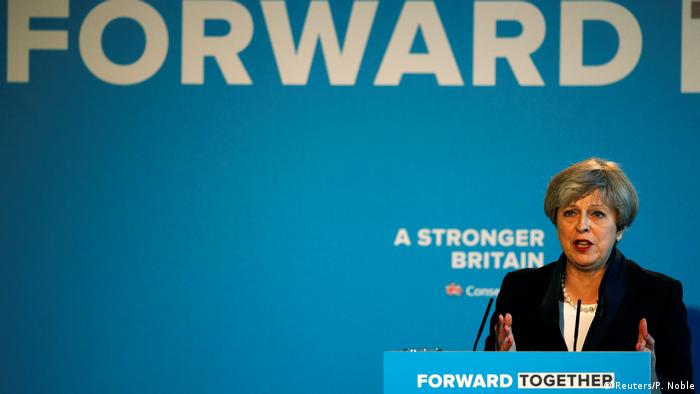 British Prime Minister Theresa May on Thursday urged voters to "strengthen my hand" in Brexit talks, as she unveiled the Conservative manifesto. May reiterated that Britain would be leaving the European single market and the customs union and warned of "tricky battles" over the next two years as the country negotiates its departure from the EU.

"Every vote for me and my team will strengthen my hand in the negotiations to come," May said at the launch in Halifax in northern England, calling it "a manifesto to see us through Brexit and beyond."

- Conservatives gain in local elections ahead of June vote

"If we fail, the consequences for Britain and for the economic security of ordinary working people will be dire. If we succeed, the opportunities ahead of us are great," May said, as dozens of anti-austerity campaigners and trade unionists rallied outside.

"It is time to put the old tribal politics behind us and to come together in the national interest, united in our desire to make a success of Brexit," May said.

Mainstream British media said on Wednesday that May would pitch immigration strictures and trim certain welfare benefits for pensioners when she unveiled her pledges later Thursday for Britain's snap June 8 election.

Employers seeking non-EU workers for skilled jobs would face a doubling of the so-called skills charge and migrant workers would be asked to pay more into the National Health Service, according to the BBC.

The extra revenue gathered would flow into skills training for British workers.

The skills charge sees companies fined when they employ migrants from outside the EU.

The BBC said May is also planning to implement a reduction of immigration from EU nations, once Britain has finalized its divorce from the bloc.

That amounted to the "end of freedom of movement, " a key tenet of open-borders Europe, said the BBC, quoting an unnamed source.

Addressing a G20 trade union meeting in Berlin on Wednesday, German Chancellor Angela Merkel warned Britain that ending free movement of people "will have its price."

Merkel said London should not attempt to stipulate "there's a cap of 100,000 or 200,000 EU citizens, more aren't allowed into Britain - perhaps researchers as well, but no others, please."

May outlines other pledges

May said she would also tighten laws on company takeovers and would ensure any foreign group buying important infrastructure did not undermine security or essential services if she wins next month's election.

"We will require bidders to be clear about their intentions from the outset of the bid process; that all promises and undertakings made in the course of takeover bids can be legally enforced afterwards; and that the government can require a bid to be paused to allow greater scrutiny," the Conservative Party said in its election policy document on Thursday.

May also said that when the current triple lock system governing the rates of state pensions expires in 2020, a new double lock system will be introduced instead. She said the double lock would mean pensions would rise in line with earnings or inflation, whichever was highest.

May said now was not the time for another Scottish independence referendum and one should not take place until the Brexit process has played out.

May added that she would increase spending on the state-run National Health Service by at least 8 billion pounds over the next five years and hike the migrant health surcharge. The Conservative election policy document also said it would prioritize the issue of the 140,000 nationals from other EU countries who work in the health system.

Writing in The Sun newspaper, May said she was "determined to cut the cost of living for ordinary working families, keep taxes low and to intervene when markets are not working as they should."

The Telegraph newspaper said May would also stick to the conservative government's pledge to cut the corporation tax to 17 percent by 2020.

People who currently receive free care in their home would be charged more, and funding for universal free school lunches for young children would be diverted to other educational tasks.

The ruling Conservative Party received 4.1 million pounds ($5.35 million) of donations in the first week of the campaign, the watchdog Electoral Commission said on Thursday. That compares to 2.7 million pounds for the main opposition Labour Party.

May heads into the election against the opposition center-left Labour with opinion surveys indicating that she could win by a landslide.

The European Union has increased its forecast for economic growth in the 28-nation bloc, saying the recovery was gaining strength despite the elevated uncertainties of Brexit and protectionist trade policies. (11.05.2017)