Seven oil spills have taken place in the Peruvian Amazon in 2016 alone. This is directly harming biodiversity and the livelihoods of indigenous people. Why does it keep happening, and what are the long-term consequences? 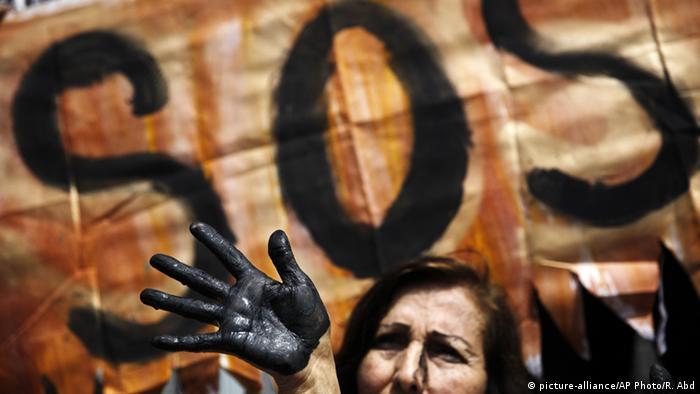 It's been a bad year for Peru's Amazon - 2016 has seen seven oil spills there so far. And it's only September.

Most of these occurred across the Northern Peruvian Pipeline, in operation since 1977, which transports crude from the Peruvian Amazon to the Pacific Coast along 854 kilometers (530 miles) and is under the control of state-owned Petroperu.

After the first two spills leaked around 3,000 barrels, in January and February, the pipeline was shuttered for repairs. However, five additional oil spills have happened since then.

According to Peru's environment regulator OEFA, at least five oil spills were due to poor pipeline conditions, and illegal use of it after the closure. However, the oil company is blaming the latest two spills on vandalism by locals.

The Amazon represents more than 60 percent of Peruvian territory, and is home to some 28 million people. Whether the fish in spill zones are still safe to eat, and how to get clean water, are now daily questions for inhabitants of the region. "Oil spills are destroying our communities," said Wilmer Chávez, president of the Interethnic Organization of Alto Pastaza-Andoas (ORIAP). "We don't even have clean water. We will keep up the fight indefinitely, using all necessary means to defend our land," he told DW.

No truce for Peruvian Amazonia

Indigenous communities in the Peruvian Amazonia have suffered the impact of oil spills and pollution for decades - more than 190 oil spills have been recorded in Peru since 1997, according to Peru's energy and mining agency.

But the situation appears to have worsened since the beginning of 2016. After the first two oil spills leaked 3,000 barrels - polluting nearby rivers and destroying the livelihood of locals - protests against pipeline's poor conditions in February forced its shutdown.

When a third oil spill occurred in June - of 600 barrels - then-Minister of Environment, Manuel Pulgar Vidal, accused Petroperu of pumping crude illegally through the pipeline. The president of Petroperu was ousted, and a $3.5-million (around 3-million-euro) fine was levied.

But the disaster continued: During August and September, four additional oil spills were recorded in the area. The last two occurred while thousands of indigenous people were demonstrating for withdrawal of the oil companies.

According to the Peruvian government, Petroperu is responsible for at least five of the seven oil spills - the company has already been penalized more than $7 million. Petroperu continues to insist, however, that some of the oil spills were a result of extreme weather.

Arlen Ribeira, representative of the Coordinator of Indigenous Organizations of the Amazon River Basin (COICA), told DW that oil spills in the Peruvian Amazon are a clear sign of irresponsibility and negligence on the part of the Peruvian state.

"They do not care about the negative effect of oil spills on indigenous people, and therefore they are not taking serious measures to control it," he said.

With regard to the more recent oil spills, Petroperu has stated that vandalism by indigenous groups is to blame. It argues that potential oil spill cleanup jobs motivated locals to damage the pipeline.

For Chávez, this argument is another strategy to avoid responsibility. "When we report what is happening, we get accusations in response. And yes, they give us work for a short period - but then they leave us in an even worse situation," Chávez said.

The OEFA is still evaluating the situation to try and determine who is responsible for the latest spills. But both Chávez and Ribeira believe fines only benefit the government, not the indigenous communities. 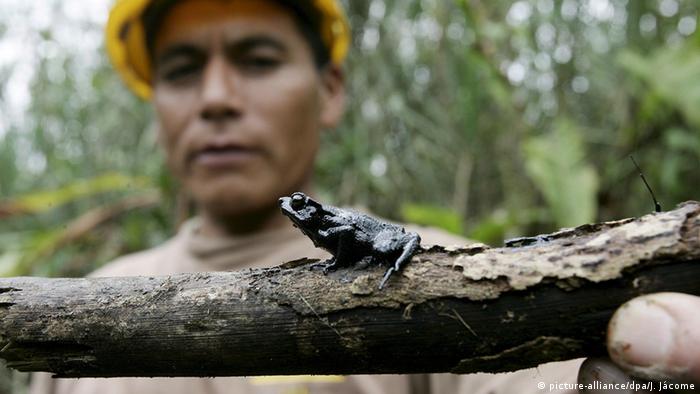 Peru's neighbor Ecuador has a long history of oil spills

The risk of a single drop

The amount of oil spilled 2016 in the Peruvian Amazon - less than 10,000 barrels in seven spills - is a relatively small amount, compared for instance to the 650,000 barrels of oil that have fouled parts of the Amazon of Ecuador since the 1960s.

In an interview with the Peruvian newspaper "El Comercio," Petroperu President Augusto Baertl Montori said that the environmental impact of the oil spills has been exaggerated - and that except for one, the spills have affected very small areas.

However, Ribeira highlights that despite this "relatively small" amount, such accidents have catastrophic impacts on the local ecosystems, biodiversity and human health.

"The spills go into tributaries that flow into the Amazon River, polluting on their way," he said.

"All natural resources used by indigenous communities get polluted: their drinking water, their fish and their livestock," Ribeira added.

Still, studies to evaluate the impact of oil spills in the Amazon are scarce, and the long-term consequences remain virtually unknown. 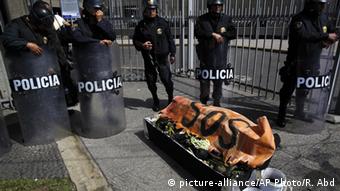 Activists demonstrated at Petroperu's headquarters in Lima this past August

A study from January 2016 by Peru's National Institute of Health showed blood lead levels in children of Amazon villages that could affect their cognitive and motor development, and cadmium and mercury levels higher than allowed in adults.

But further research would be required to conclude whether such metals come from oil spills, industrial activities or natural sources.

Meanwhile, Chávez and his people struggle to survive. The government is planning to extend oil company licenses for 30 years, he said. "But once the oil is gone, what will remain for us? Our fish will be gone, our water as well," Chávez said.

For Ribeira, a sustainable future is only possible in the Peruvian Amazon without oil companies. Only under the protection of indigenous communities can the Amazon - and by extension planet Earth - survive, he believes.

"We will keep protecting the Amazon and contributing to a healthy planet," he concluded. "Where indigenous people live, nature lives."

Twenty years ago after Nigerian civil rights activist and environmentalist Ken Saro-Wiwa was executed for his environmental activities, Shell Oil is still causing destruction to his native Ogoni land. (04.04.2016)