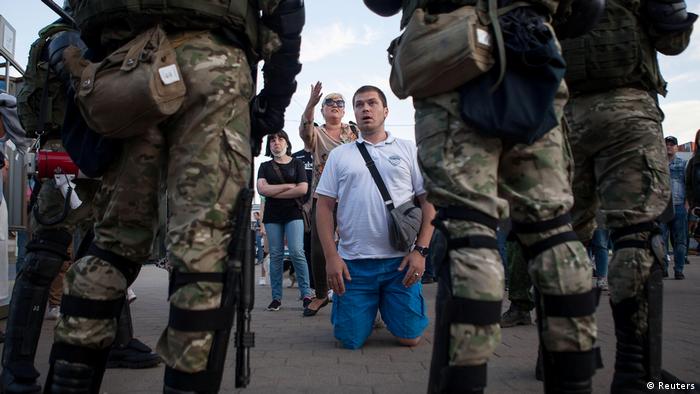 Olga has spent all day in front of the Okrestina Street police station in Minsk. She is one of dozens of relatives and friends of people who have gone missing in a brutal police crackdown since protests against vote-rigging and President Alexander Lukashenko broke out on August 9.

All over the country, people are queuing in front of police stations, jails and detention centers, as well as hospitals, desperate to find out what has happened to their loved ones.

"They haven't even issued a list," explains Olga, who is looking for her son Pavel, an IT specialist. "People have to go up to the counter and call out a surname. Only then are they told whether someone with that surname is there or not."

A Belarusian human rights organization has compiled a list of about 300 names of missing people.

Olga said that her son was arrested on August 11. She said that she saw riot police drag her son by the hair and beating him. "I begged them to leave him alone but they swore at me. Then they pushed me away and told me to get lost."

She also said that some men who had been released from detention had told her the situation was unbearable and that up to 40 people were being detained in cells meant for four people. There is apparently no medical help and parcels containing medicine are not being accepted. 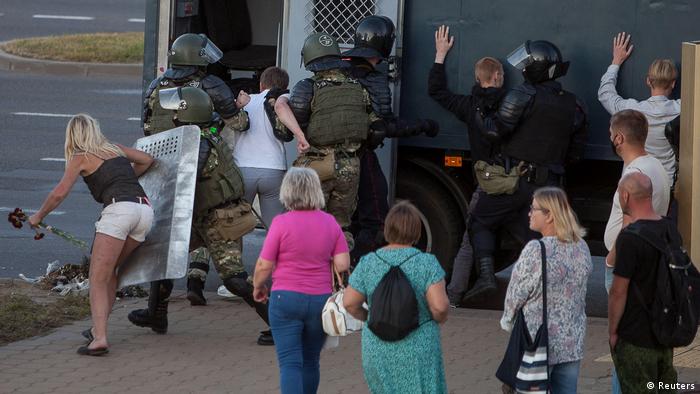 Police arrested people demonstrating against the outcome of the presidential election

The editor-in-chief of the opposition newspaper Nasha Niva also went missing briefly. The journalist Daria Gushtin posted this message on Facebook about her husband: "I've not heard anything about Yegor Martinovich for two days."

He was arrested on his way home on August 11. Gushtin said a spokeswoman for the Interior Ministry had initially given conflicting information regarding Martinovich's whereabouts, before admitting that nobody knew where he was.

Gushtin said she received many messages from people insinuating that her husband had been so badly beaten that the police were scared of releasing him to his family.

"I've mobilized everybody I can, but for two days I've not been able to find out where he or his car is," she wrote. "Lots of people are asking about him, I don't know what to answer."

Later, she wrote that her husband had been found and released from a jail in Zhodzina to the northeast of Minsk.
Read more: Women line the streets of Minsk to protest Lukashenko's crackdown

The film director Maxim Shved is reportedly also in this jail. He was arrested on August 11 while filming. "Maxim was working on a new project, where taxi drivers and passengers would talk about what they thought of the elections," explained his girlfriend, Tatiana.

On Tuesday, he was filming the epicenter of the protests when he called her: "My phone rang at 1:15 and Maxim turned on the speakerphone so I could hear that he was being arrested."

"He was apparently on the list of arrested journalists because someone heard his name in front of the police building in Okrestina Street," she continued. "We drove there but didn't find him."

She said that some friends had also asked the emergency medical unit about him but to no avail. Then they turned to the Belarusian human rights organization Viasna for help.

Tatiana was finally able to find out that her husband was being held in Zhodzina after being found guilty of resisting the police.