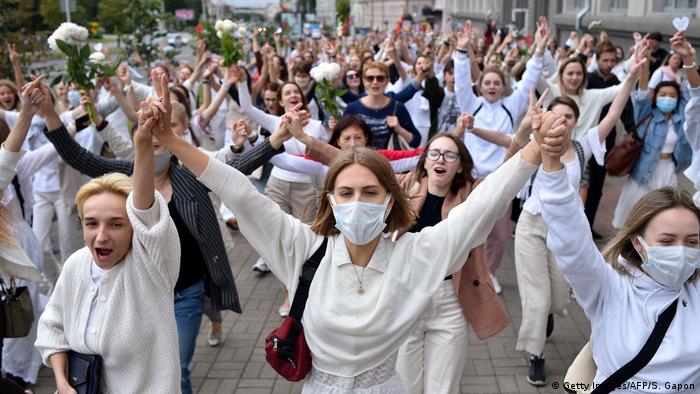 Women dressed in white protest against police brutality in Minsk

Hundreds of women took to the streets of Minsk on Wednesday to vent their anger at a crackdown enforced by President Alexander Lukashenko in the wake of protests in Belarus.

Across the Belarusian capital, groups of women dressed in white formed human chains, chanting "Shame!" and called on authorities to stop their violent suppression of protesters.

Some women came together outside a covered food market in Minsk, holding flowers in the air, while another crowd gathered outside a prison where protesters were being held.

Mass protests erupted in cities across Belarus on Sunday after official exit polls showed Lukashenko was on course for reelection. The president's opponents claim the election result was rigged and global leaders, as well as the EU, have expressed skepticism over the validity of the vote. On Wednesday, the government confirmed one of the protesters died after police detained him on Sunday, claiming that the 25-year-old's health "suddenly worsened" while he was in jail. The authorities previously said another man lost his life, allegedly when an explosive device he was attempting to throw at the police exploded in his hands.

Meanwhile, French President Emmanuel Macron spoke on the phone with Russian President Vladimir Putin on Wednesday to express his concern about the violence since the election in the ex-Soviet state.

Macron told his Russian counterpart he is "very worried about the situation in Belarus and the violence that citizens have faced during the elections," the Elysee said in a statement. "He emphasized the need to find again the path of dialogue."

Putin and Chinese President Xi Jinping both offered their congratulations to President Lukashenko in the wake of the strongman's claim of having won the ballot.

Lithuania, Poland and Latvia have jointly offered to mediate between Lukashenko and the protesters in order to find a solution to the growing unrest. 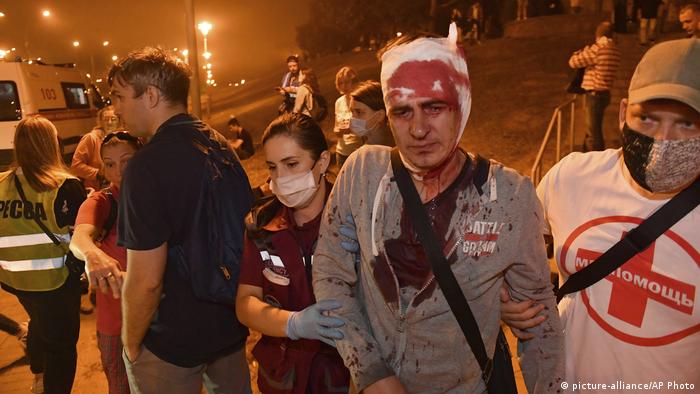 A wounded man is assisted during clashes with police after the Belarusian presidential election in Minsk, Belarus

UN: 'People have the right to speak'

The United Nations condemned the violent crackdown on protesters. UN human rights chief Michelle Bachelet called for the immediate release of everyone unlawfully detained, as well as an investigation into the abuse meted out by authorities.

"People have the right to speak up and express dissent, even more in the context of elections, when democratic freedoms should be upheld, not suppressed," the former Chilean president said in a statement.

"Reports suggest that approximately 6,000 people have been detained in the last three days, including bystanders, as well as minors, suggesting a trend of massive arrests in a clear violation of international human rights standards," Bachelet said.

"Even more disturbing are the reports of ill-treatment during and after detention", she added.