Refugees reach out to Italy earthquake victims | Europe | News and current affairs from around the continent | DW | 26.08.2016

Refugees housed in a reception center near Ascoli Piceno were among the first to offer aid in the aftermath of the earthquake that shook central Italy. Alessandro Accorsi reports from the region. 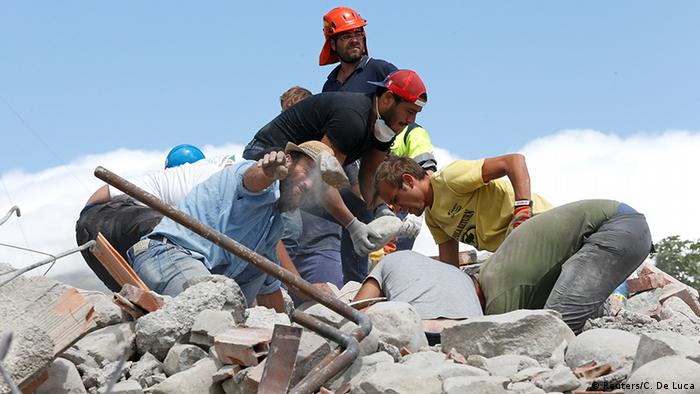 "We woke up in the middle of the night and we were scared," AbdulMalik, a refugee from Ivory Coast, told DW. It was the first time the 35 asylum seekers, mostly from sub-Saharan Africa, had experienced an earthquake.

"Is this the end of the world or is it normal? Maybe mountains normally shake," AbdulMalik thought, as it was also the first time he was on a mountain.

AbdulMalik and another 10 migrants landed in Sicily on Monday and had been transferred to the reception center near Ascoli Piceno on the same night of the earthquake.

The structure where they are hosted is only 80 kilometers away from Accumoli, the epicenter of the earthquake.

"In the early morning they were all ready to go and help," said Paolo Bernabucci, president of Group of Solidarity (GUS), the NGO hosting and working with the asylum seekers.

The social workers already had experience in offering help in the aftermath of the earthquake that destroyed L'Aquila in 2009. They told the refugees that they needed to coordinate with the rescue teams in order to make themselves useful.

"If they had any money, they would give it to help. But they don't, so they offered to go and pull up the rubble," Bernabucci told DW.

On Thursday, a group of around 20 refugees was tasked with clear-up work in Arquata del Tronto, one of the main villages flattened by the earthquake. "We could not help pull away the rubble as there might have still been people under it," said Tijamba from Senegal as he watched his friends appear on videos of local news reports on his mobile phone.

"But we still felt useful and people came to thank us," he said. 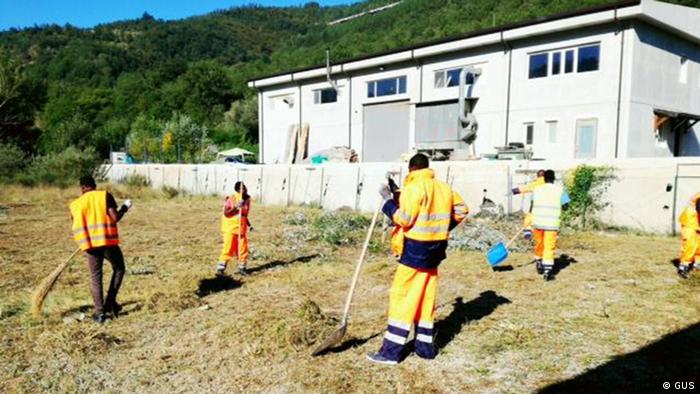 Clearing the way: This area near Arquata del Tronto will function as a distribution center for food and medicine

They helped clear an area that will function as a distribution center for food and medicine. "People came to thank us, but it felt normal for us. We were scared and we know what it means to lose everything," Tijamba told DW.

"I have been living in this area for a year-and-a-half, and if I'm still alive it's because people here welcomed me and offered refuge," said Abdulloi from Benin.

Part of the community

"There is nothing heroic about it; they feel part of the community and they wanted to help," said Bernabucci. "They went there as young people who wanted to help, not as refugees."

GUS has been working with refugees for 20 years in Marche, one of the regions most affected by the earthquake. They look after several groups of asylum seekers, mostly in small towns inhabited only by a few hundred residents.

Working in small centers is harder to manage from an organizational point of view, but often more rewarding. "We actively try to build a strong relationship between our hosts and the local community," Gemma Cartechini, responsible for the clinic area at GUS, told DW.

In Servigliano, a village of only 2,000 residents, the local mayor was initially skeptical when the first refugees arrived in 2011. He tried to keep them out of the village, until he listened to their stories and had a change of heart. 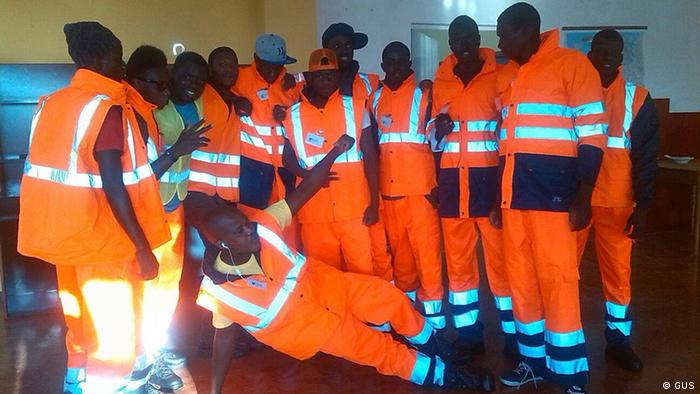 He spent the next few days walking the refugees around the village to meet the local residents.

Fast-forward to a few years later and the elders of the village enjoy the company of the asylum-seekers in their homes, sharing dinner together.

"Our main effort is to turn diffidence into curiosity and then into knowledge," said Cartechini.

Xenophobic tensions, however, are on the rise in Italy. At the beginning of July in Fermo, the closest city to Servigliano, a Nigerian man was killed after an altercation with a local resident who had used racial slurs against the refugee's wife.

The incident highlighted a growing chasm within Italian society, which only recently has started coping with multiculturalism and immigration. What started as an altercation and ended as a fatal accident has become an ideological battleground between those who welcome asylum-seekers and right-wing or populist groups.

As these incidents increase and further poison the atmosphere, it's becoming harder and harder for politicians to justify taking in asylum-seekers.

"People say 'look, the migrants live in a hotel while the Italians will sleep in a tent,'" said Tijamba. "We do not like to live here, but we have nowhere else to go. We tried to help, but we could also share this place," he added.

More refugees across Italy also wanted to go and help in the earthquake zone, but their presence would likely hamper the efforts of the emergency rescue teams.

"We are surprised they want to help, while it's perfectly normal for them," said Bernabucci. "What they can't understand is why we do not want to help them."