State of emergency in Italy as death toll rises

267 people have lost their lives in an earthquake that devastated parts of Italy earlier this week. Prime Minister Matteo Renzi promised action to prevent such a tragedy from occuring again. 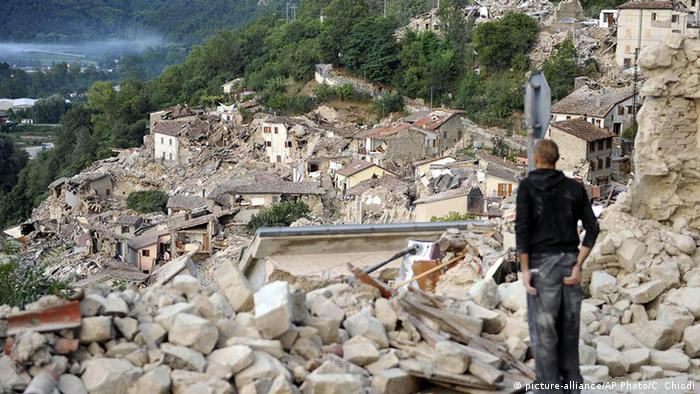 Italy's civil defense agency has said that 267 people died and 400 were hospitalized in the earthquake that hit the town of Armatrice early Wednesday morning.

The toll is expected to rise even further, as rescue teams continued to search for people buried beneath the rubble.

On Thursday, Amatrice was hit by a 4.3-magnitude aftershock, one of more than 400 tremblors that have continued to devastate the area following the earthquake.

Cranes and emergency teams were brought in to remove the rubble.

One woman, Alessandra Cioni, who managed to escape from her destroyed home, said she had no option but to push on. "We have been saved, not like half the people in this place who have lost their lives," she told Reuters news agency.

Italy is one of the most earthquake-prone countries in Europe, as it sits on two faultlines. The L'Aquila earthquake, which struck the region of Abruzzo in 2009, killed more than 300 people.

Renzi, who on Wednesday promised the people of the devastated region that no one would be left behind as the government intervened, said Italy must look toward the possibility of future emergencies as it begins reconstruction.

"We are the best in the world when it comes to managing emergencies, but that is not enough," the prime minister said. "We need to change our mentality. We need a new model of development, but also of prevention."

He emphasized that it was necessary to rebuild infrastructure so that it would prevent similar devastation from occurring again. He also said that it was the government's priority to aid those made homeless by the quake.

It's impossible to predict earthquakes. We know that. We also know regions such as the Apennines in Italy are prone to shake. There's little we can do but build resistant housing. Here's why. (25.08.2016)