Refugees make real news with a fake camera in Idomeni | Europe| News and current affairs from around the continent | DW | 27.04.2016

As the Idomeni refugee camp in Greece fades from the 24-hour news cycle, three refugees are filling the (absent) reporters' shoes. What began as a parody with a fake camera has become a real online news outlet. 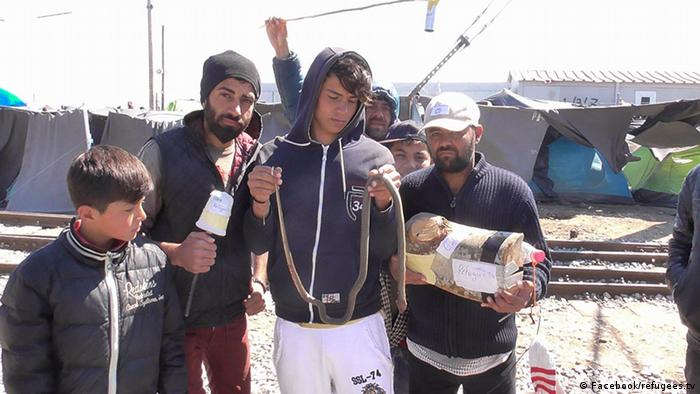 It began with a fake camera made out of a hunk of wood, a plastic bottle (the eyepiece) and a "cable" that was nothing more than a length of used rope. The latter leads to a fake microphone. Scribbled onto the microphone's homemade windsock are the words "Refugees.TV."

But they also tried to fill a very real news void those journalists left behind.

"The refugees liked it," said Refugees.TV's translator, Mustafa Alhamoud from Aleppo, in an interview with the Basque-language news outlet Hala Bedi Irratiaren. "It's fake, everybody knows that, but they speak very seriously about certain topics."

'No information, no help'

Mustafa, or "cameraman number 2," is the man who now really does record these reports with a real camera. The camera was donated by a volunteer who liked what the upstart was doing. 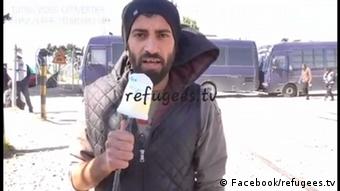 Refugees.TV's first report was pure satire. Inside the camp, they and other refugees took advantage of one thing they have in abundance - time - and set up a fake United Nations office.

"We brought a table, a laptop, and we built an office," Mustafa said. "It's a fake one. And we wrote on the board, 'United Nations, no information and no help.'"

A handful of refugees then became "representatives" of the United Nations, bedecked in blue shirts and caps reading "UN." They were then interviewed in mock earnest by Refugees.TV.

"Maybe the fake [UN] will find a solution for the refugees," Mustafa explained. "But the real one finds no solution for people. For two months, the border [with Macedonia] has been closed. They did nothing."

From satire to serious reporting

The crew uploaded the report to their Facebook page. At the time of writing, the video has just 17 likes.

Then, when a windstorm ripped through the camp just days ago, the team had their second story.

They interviewed refugees and volunteers throughout the camp, showing how the storm had flattened dozens of tents and affected their day-to-day lives. In other words, they were telling a real news story that was largely ignored by international media.

That said, the Refugees.TV team stuck to is roots. The original cameraman, Basel, his wooden "camera" hoisted upon his shoulder and scanning the site for b-roll footage, continued "filming" the entire time the real camera recorded the interview. A fourth man joined the team, holding an entirely fake boom mic for extra audio depth.

On Facebook, the sequence of reports is briefly interrupted by "breaking news":

A refugee had found a snake (see picture top).

In a bit of comic mistranslation, the Facebook photo caption reads: "One of the refugees found a snack."

But the issue is real. Refugees in Idomeni had reported snake bites previously, and the three-foot-long (one-meter) serpents are generally adding to the misery there.

A voice for the refugees

Less than a week after Refugee.TV was born, it is now doing important work at the Idomeni refugee camp. The trio is giving a voice to people who otherwise don't have one, and it's turning the table on the mainstream media, allowing the interviewers to ask the questions that they think actually matter. 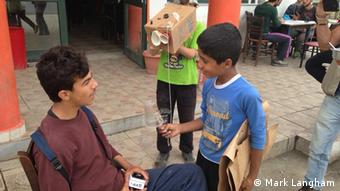 "Most of the media shows the bad image of refugees, when they fight," Mustafa says. "Nobody shows our rights. Nobody shows the real image here."

Their topics are increasingly serious. A post from Tuesday (26.04.2106) read, "Today, the Greece police distributed flyers to move the refugees to other camps… We are going to ask the refugees about that." That letter, distributed by Greek authorities at the camp, implies that some - but perhaps not all - of the refugees will be relocated.

And, in a sign that the Refugees.TV format has a bright future in Idomeni, children there are now building their own cameras and microphones and are interviewing people throughout the camp.

The human rights organization has demanded an improvement in the living conditions of migrants camped in Greece. Over 46,000 refugees are living in squalor, scattered around the Greek mainland. (18.04.2016)