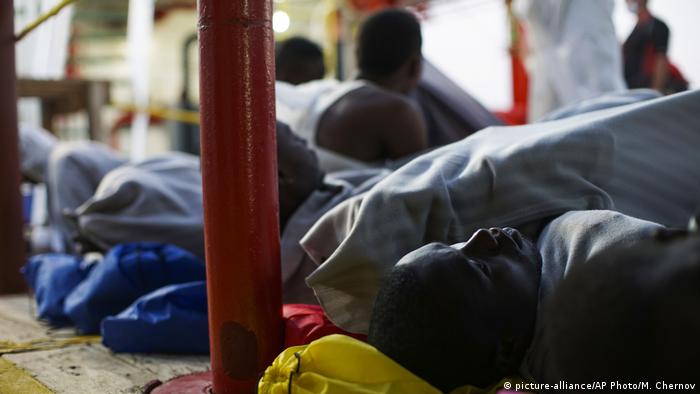 Relief services said the occupants of seven boats were rescued from the central Mediterranean on Sunday in stormy weather. Six bodies were recovered.

"It bucketed down during today's rescues. Winter on the Mediterranean is next-level grim," said Doctors Without Borders (MSF) in a Twitter message.

The six deaths add to a toll of more than 4,700 people counted by the International Organization for Migration so far this year.

Baby born on board

Most were en route to Italy from Libya, where traffickers profit.

By last week, 173,000 migrants had registered as having reached southern Italian ports this year, according to Italy's interior ministry.

Italy's coastguard said its vessels were deployed Sunday along with those of the EU's naval mission, NAVFOR MED, the Italy navy, and the vessel Aquarius run by a humanitarian group SOS Mediterranean.

Sunday's birth of a baby boy on board Aquarius to a Nigerian woman rescued on Saturday had been "good news that cheered up the whole crew," said the aid group on its website.

The EU's Dutch presidency said Sunday that the bloc had signed an agreement with Mali on the return of migrants who have reached Europe's shores and had been refused asylum.

It was the first such mechanism agreed with an African country, said the Dutch foreign ministry.

At a summit in November 2015 on Malta, EU leaders agreed with African counterparts to set up a 1.8-billion-euro ($1.9-billion) fund to address root causes of migration.

In return, African nations would step up controls and accept repatriations of those deemed as not needing asylum protection.