Some 1,400 migrants were rescued off the Libyan coast earlier this week. DW talks to the UN's senior diplomat in Libya, Martin Kobler, about the downside of rescue operations -and the prospect of billions more migrants. 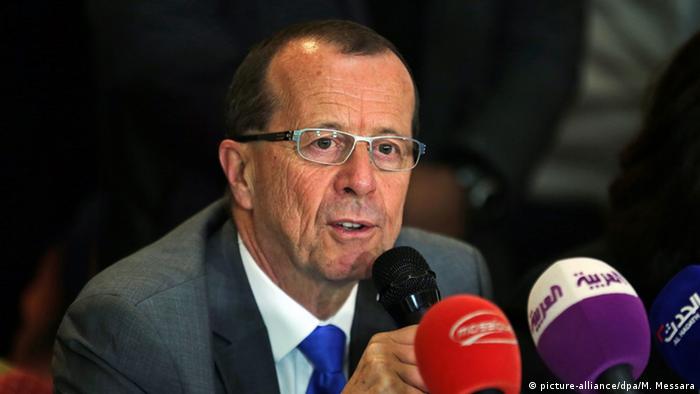 Martin Kobler: The reality is that they do have this unintended effect. The European ships only operate in international waters, 12 miles (19 kilometers) from land. That's why the smugglers take people up to the end of the 12-mile-zone, and from there they'll even call the Italian coastguard and say, "Go and pick these people up!" Of course such missions have a pull factor, that's why they can only be part of the solution. And until the rule of law is re-established in Libya, people smuggling will continue.

What do you think is the best way to combat the unscrupulous business of people smuggling?

On the one hand, you need repressive measures. This is a crime, and these people need to be brought before a judge and punished. For that, of course, you need independent courts, and that hasn't always been the case previously. People smugglers bring people to Libya from across the Sahara. Then they're held in camps, some of which are run by the state. One of our biggest concerns is that human rights are not being respected in these camps.

Would you call Libya a failed state in its current condition?

Libya is certainly a difficult state, one that hasn’t quite become comfortable with its statehood. But we’re working on that. Libya has never had strong institutions. After 42 years of dictatorship under Gaddafi, it’s of course difficult to bring the country together again. That’s not something you can do overnight.

There’s long been talk of establishing a unified army in Libya. Have you given up hope that it will eventually happen?

No, certainly not. You will see - this army will exist, sooner or later. That’s something we agreed on in the UN-sponsored Libyan Political Agreement.  But as Nelson Mandela once said: Negotiating an agreement is one thing. Implementing it is much more difficult.

Several Libyan sources claim that weapons are being delivered to Libya, despite the UN embargo. They are reportedly coming from several Western countries. Do you know anything about that?

I don’t think that the West is exporting weapons to Libya. I assume that every member state is upholding its obligation not to support Libyan forces with weapons. There have been American air strikes, however. But that’s not about weapons exports to Libya, rather the presidential council asked the Americans for these strikes. I think that’s good. Last year, Islamic State was practically eliminated in Libya, and now it no longer has contiguous territory in the Gulf of Sirte.

Where do you hope to see Libya at the end of your mandate for the United Nations?

I don't anticipate a grand solution to Libya's domestic crisis by the end of my mandate. The tasks here will take generations to complete. I'm also not satisfied with what we've achieved this year in terms of getting the migration issue under control. There are positive and negative aspects. The fight against terrorists is a positive element, and uncontrolled migration is a negative element. I wish that the international community would step up its efforts. Libya is a neighboring country after all. It's only a 30-minute flight from Malta, which is in the European Union. It's not like it's on another planet.

But if you'll allow me, I'd like to set aside the annual rhythm we're currently in and take a broader look at the future. In the year 2050, Africa will be home to 2.2 billion people. Egypt will have 150 million people, and Europe's population will have decreased by 73 million. The 2.2 billion people in Africa will start to push their way north. It's important that we start thinking about this future scenario today, in the year 2016, and to start working much more intensively in the countries of origin.

Pro-government forces in Libya say they have freed 13 foreign nationals, including 11 female Eritrean captives, from "Islamic State" militants in Sirte. Troops claim only a small part of the city is still held by IS. (22.10.2016)

Libya in chaos five years after the death of Moammar Gadhafi

Five years after the death of dictator Moammar Gadhafi, Libya is highly fragmented and on the brink of anarchy. Mattia Toaldo, Libya expert for the European Council on Foreign Relations, explains the situation to DW. (20.10.2016)