Refugees hold out in Sicily′s Catania | World| Breaking news and perspectives from around the globe | DW | 24.04.2015

Refugees hold out in Sicily's Catania

Refugees board boats in North Africa headed for Europe, and often end up shipwrecked. Last year, two-thirds of the migrants rescued by Italy were brought to Catania. Megan Williams reports from the Sicilian city. 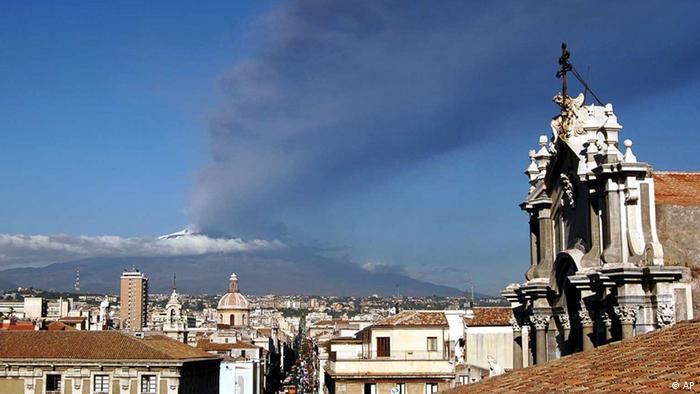 In the large, bustling port of Catania, with the snow-capped - and still active - volcano of Mount Etna looming in the distance, a cluster of sunburnt fishermen go about their business in the late afternoon, their large, callused fingers deftly repairing nets for their night excursion.

For centuries, this ancient Sicilian port has been a safe harbor for seafarers from around the Mediterranean. Yet never before in its long history has it ushered in so many desperate people in need of refuge.

Antonio, who helps his father repair the nets, points across the harbor at the Gregoretti, the ship that last Sunday carried to Catania 27 survivors of the largest known shipwreck in history of the Mediterranean. Survivors estimate 850 perished as the ship went down just off the coast of Libya.

But in 2014 alone, 100,000 - two-thirds of the migrants rescued by Italy - were brought to Catania. When asked how the waves of migrants affect their lives here, Antonio's father Giancarlo, shakes his head in sympathy for them. 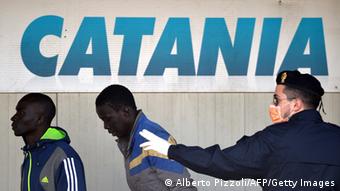 "We don't go far enough out to sea to see their boats, but a few years ago, when the boats made it closer to us, we helped rescue one boatload."

But other fishermen here say that the rare times they have come across the flimsy boats crammed with migrants, they're wary of rescuing them.

It's not because they don't want to, they say, but because if they save migrants before contacting the coast guard, the Italian authorities will sequester their boats as part of human trafficking investigations, cutting them off from their livelihood for months.

Unlike the xenophobic rhetoric that comes from the Northern Italian Lega Nord party, which has called for Italy to let the boats sink, people from Catania are largely sympathetic to the migrants' plight. Sicily, after all, has a long history of emigration itself, being one of the poorest regions of Italy where unemployment is still rife.

Just a short walk from the port, along the main pedestrian Via Etnea lined with elegant, but weathered stone buildings and fountains, a group of mainly young people holds banners and chant for Europe to do more to help the migrants.

Among them is Anjuman, a tall, fresh-faced 17 year old. He's one of the hundreds of young boys who have made the dangerous crossing to Italy on their own. He left his parents in Gambia and alone, made his way to Libya. There, 11 months ago, he paid traffickers 200 dollars and squeezed into a boat with 90 others. Luckily, they were rescued before their boat sank. But he says, he wonders why Europe is unable to save so many others like him. 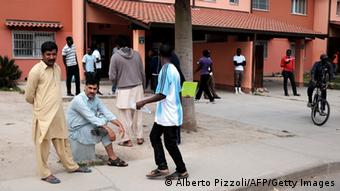 Refugees in Catania often complain they are poorly treated

"A lot of our brothers are losing their lives in sea and sometimes you feel like because of the negligence of the rescue service, a lot of people are dying. All of them died, how is that possible?" he asks.

It's a sentiment Italians share as well, reflected by their repeated calls for Europe to do more to help them.

Along with rescuing migrants, authorities in Sicily have been doing their best to tackle another huge challenge: going after human traffickers. On Monday, the Palermo police announced the arrest of 24 men accused of human trafficking. And after talking to the 27 survivors on the Gregoretti, police arrested two of them, a Moroccan and a Syrian, now charged with multiple manslaughter and human trafficking.

Catania Coast Guard Admiral Domenico De Michele, whose office overlooks the port, says he and his team have rescued thousands of victims of traffickers and occasionally seen the boats captain and crew arrested. However, he says, ring organizers have yet to be caught, something that deeply frustrates him.

"The judgment we should pass on these kinds of organizations, not just toward the so-called "scafisti," the boat drivers, but also the organizations that use the boat drivers, is the same judgment we should pass on organized crime," he says. "When they organize the trafficking of humans they know perfectly that they're risking the lives of hundreds of women, men and children. Of the 11,000 people saved this week, we registered 500 kids, 300 who were unaccompanied. This gives us a glimpse of the desperation at the core of this exodus." 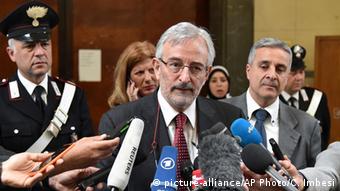 Giovanni Salvi, the weary, overworked head prosecutor for Catania, agrees the number of arrests of people smugglers is so far a drop in the ocean. Catania prosecutors try to target the heads of the criminal organizations, he says, but they are based in Africa, which makes arrests even more challenging. He says Italy has identified three heads of Egyptian trafficking rings and asked Egypt to arrest and extradite the men, something that has yet to happen.

"Last year, about 100,000 migrants arrived in the ports of Catania, which created a huge amount of work for the magistrates here," said Salvi. "We already have a tough time trying to fight organized crime here in Catania. Neither the magistrates nor the police have been given extra support in trying to go after the traffickers."

Salvi says despite the huge swell in the number of trafficking cases as more and more migrants arrive, his office has received no extra money or staff.

Catania police are also overwhelmed in dealing with all the asylum requests. This leads to long waits for the young migrants staying at the welcome centers here, which puts them at greater risk of being exploited by local criminal groups, says Salvi.

Anjuman is one of them. He says his high hopes for a better life in Europe are fading and his anger is growing at how he is treated by Italians.

"They see your black skin and they always think that you are bad," he says, standing against a wall with other teenaged migrants.

After almost a year, he doesn't know how much longer his request for refugee status will take. Like the dozens of others staying in the migrant center with him, he's bored and restless and poor and simply wants to get on with his life.

It's a wish that, until Europe does more to actively and cooperatively face the migrant crisis, will likely remain frustratingly, tragically, out of reach for dozens of others stuck in Sicily, near the port that they thought would bring hope.

Italian authorities have said the Mediterranean's deadliest migrant boat disaster was caused by a combination of mistakes by the captain and the ship being impossibly overcrowded. Some 800 people are feared dead. (21.04.2015)