Over 1,600 refugees have arrived in Greece despite a new EU-Turkey deal which is supposed curb the influx. Turkish officials have also started arriving in Greece to implement the new accord. 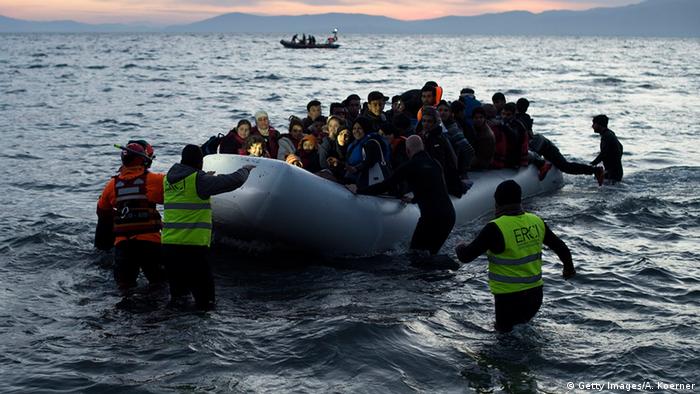 Twenty-four hours after the landmark and controversial migration deal between the European Union and Turkey went into effect, some 1,662 refugees have already landed on Greece's Aegean islands, the Greek SOMP coordination panel reported on Monday.

The continuing influx "creates a problem, and raises questions about the intent of all parties" in the agreement, SOMP spokesman Giorgos Kyritsis said.

830 of the refugees arrived on the Island of Chios with another 698 landing on Lesbos, reported the SOMP agency. With the latest arrivals, the number of refugees stranded in Greece rose to 50,411, Athens officials said.

The deal, which was agreed upon during an EU-Turkey summit last Friday, seeks to cut off the main route which enabled hundreds of thousands of refugees and migrants to enter Europe last year, many of whom were fleeing the war in Syria.

'We didn't know about this'

The latest refugees rescued from boats were ushered onto a bus to the Moria "hot spot" center where new arrivals are registered and asylum applications are processed.

"We are very tired. I want to go to my family in Sweden," said Ahmet Bayraktar, a 32-year-old unemployed accountant from Aleppo, Syria. "We'll try, God willing."

Many of the new arrivals were unaware of the latest EU-Turkey accord which dictates that new arrivals will now be held in confinement while asylum bids are fast-tracked. Before the deal was reached on Friday, those in the camps were free to leave the camp and travel to the mainland.

"We don't know about this," Bayraktar said. "We're coming directly from Syria. Everybody wants to go to the border. We don't have the news, we don't have electricity, we don't have anything."

According to the new deal, if their applications fail, the refugees will be sent back to Turkey, starting on April 4.

Turkish officials began arriving on Monday to enforce the new deal, according to Greek media. They will be in charge of deciding which migrants will be taken back to Turkey, a Greek coastguard officer told news agency DPA.

The EU, on the other hand, has not delivered on its promise to send 2,300 officials and police to carry out the operation. According to the SOMP, no EU officials had arrived as of Monday.

"We hope that the upcoming Easter break will not be a factor in delaying their arrival, because the situation calls for an urgent response," Kyritsis said.

France and Germany offered to send around 600 police and asylum experts while Romania is expected to send 70.