The EU has finally agreed on its elusive goal: a European solution to the refugee crisis. And it turns out to be the Turkish solution that Chancellor Merkel came up with as a last political resort, says Barbara Wesel. 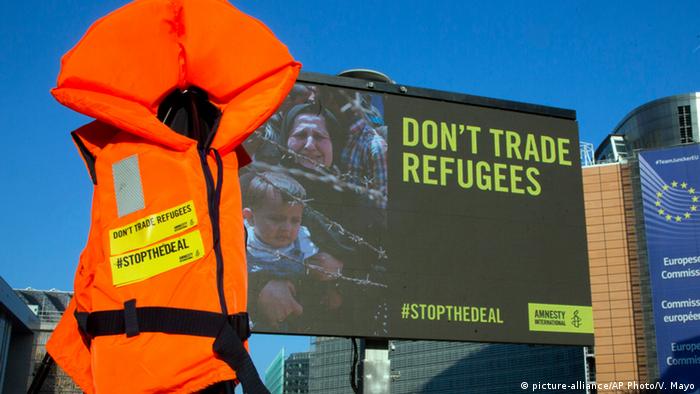 The agreement with Ankara is a kind of political success for Angela Merkel. It gives her much-needed room to maneuver within Germany, particularly after the rise of the right-wing populist party Alternative for Germany (AfD).

Her approval ratings have already risen and she can now counter all attacks by pointing out that the flow of refugees into Germany will have effectively stopped. And she will also regain some standing within the EU, appearing as the savior of unity.

But what a price Europe is paying for this deal. It effectively outsources the protection and care of the majority of refugees from the Middle East to Turkey. On paper, President Recep Tayyip Erdogan will commit to keeping international legal obligations and respecting the rights of refugees in accordance with the Geneva Convention. But since when is the autocrat in Ankara known for keeping his promises?

The EU, however, will have lost all leverage should Turkey begin to push people back into Syria or Iraq - or if it leaves them begging and starving in the streets of Izmir and Istanbul. Once the visa liberalization is granted, the Europeans will be mere onlookers in this drama. They may criticize the Turkish government and remind it of the details of the deal – but Sultan Erdogan can disregard their entreaties, as he ridicules all admonishments to respect freedom of the press, opposition rights and demands to restart peace talks with the Kurds.

This abrogation of responsibilities will cost Europe dearly in terms of credibility and international standing. How do you remind the autocrats and dictators of this world of human rights or democratic values, when the example set by the EU through this refugee deal is so pitiful and assailable? The European Union will lose two of its most valued political assets: soft power and credibility. And the reason for this sorry spectacle is the incapacity to overcome national egotisms and the fear of the populist right.

Erdogan, on the one hand, gains implicit recognition of his anti-democratic course. He is leading his country further and further away from Europe, but can enjoy the pretense of continued accession talks. There will be no stopping his slide toward a fully fledged dictatorship from here onwards.

Europe, on the other hand, is turning itself into a fortress that will be inaccessible to large numbers of refugees. Some might regard this as mission accomplished – others will deplore it as a grave loss of humanity. Apart from all the practical problems of implementing this deal and its precarious legal standing, the pictures of Syrian refugees stuck in Turkey's border regions or Iranians and Afghans looking in vain for protection will come to haunt us. The criticism of human rights organizations holds true: This deal is dangerous, illegal and inhumane.