Refugee crisis in Cyprus close to tipping point | Europe | News and current affairs from around the continent | DW | 09.09.2019 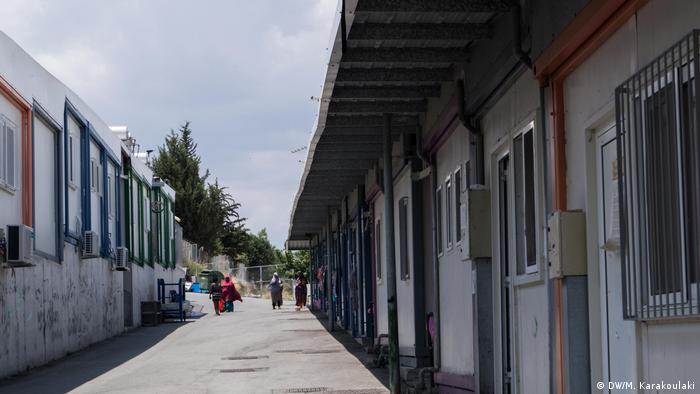 While in Turkey, Amir and Layla* had to make a life-changing decision: to seek political asylum. They fled Iran when the Iranian government, where Amir was working, had doubts about his religion. They started travelling anywhere their Iranian passports could take them. When they realized they could no longer continue, they chose to seek asylum in Cyprus because they could travel legally to the Turkish Republic of Northern Cyprus, a de facto state which is only recognized by Turkey.

A large number of asylum seekers in the country usually arrive at Ercan airport in the North and then cross into the Greek-Cypriot part to ask for international protection. The Mediterranean country has seen a sharp rise in refugee arrivals since the beginning of the refugee crisis in the region. While the figure in 2016 stood at 2,871, in 2018 it jumped to 7,713. Up until June of this year 6,554 people had asked for asylum — a number expected to rise sharply by the end of the year. At the same time the country's asylum system has a backlog of 14,000 asylum applications. The Cypriot government has already asked for the EU's assistance in relocating at least 5,000 migrants based on bilateral agreements. 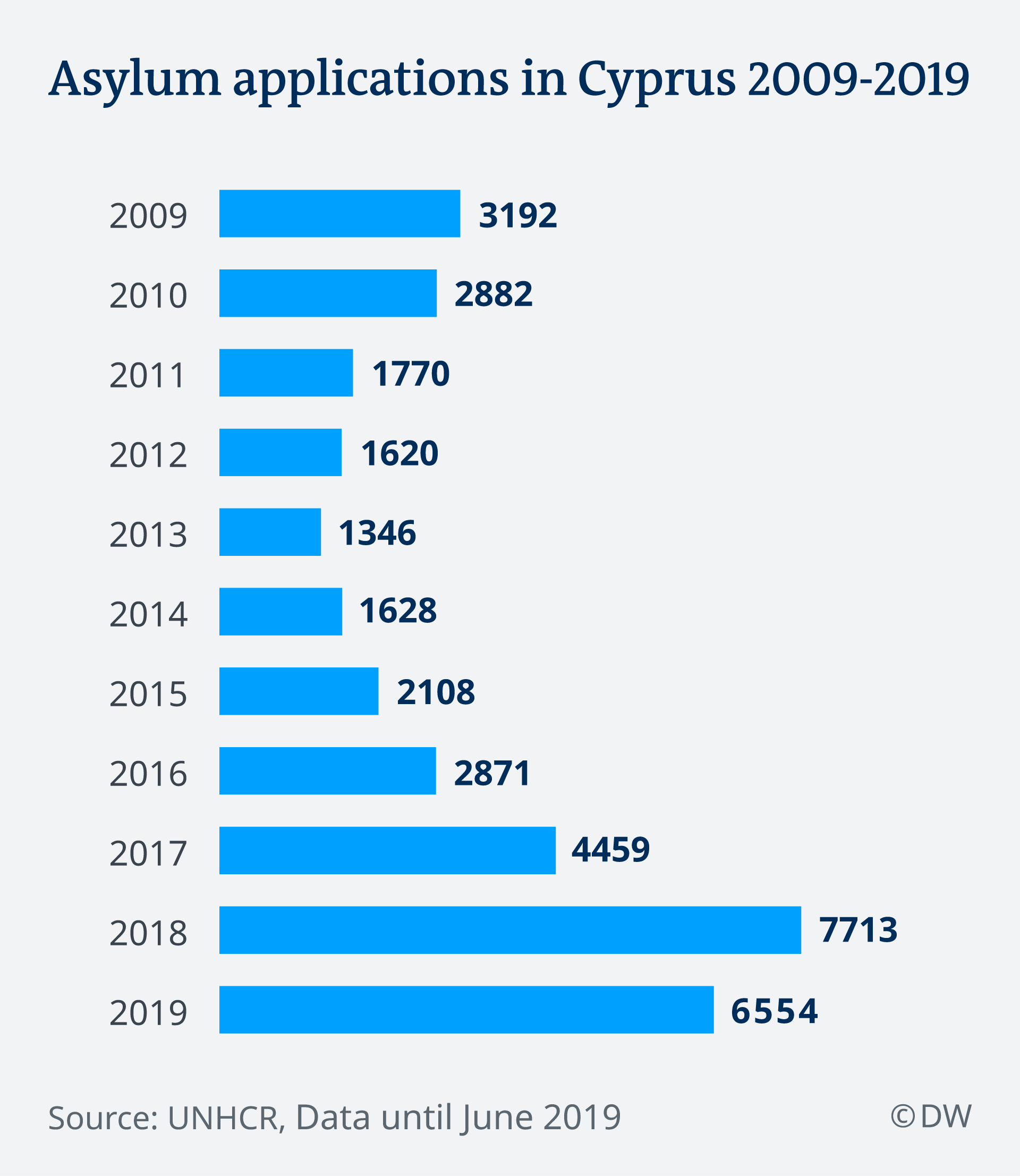 In a recent letter to the government, Dimitris Avramopoulos, the EU's Commissioner for Migration, pledged his support to Cyprus, saying that the EU has taken significant steps to help Cyprus both financially and operationally and they are considering relocation of people to other EU countries. He added that the EU has reminded Turkey that they must prevent the creation of new migration routes.

"One of the main challenges in Cyprus is the backlog of asylum applications because the numbers have drastically increased over the last two years and the system was not prepared. It was not developed to absorb such a high number of asylum seekers," says Katja Saha, a representative of the UN's Refugee Agency (UNHCR) in Cyprus.

"The first-level decision should be processed in six months. In Cyprus it can take several years. To have a final decision on an asylum claim, at the moment it takes anything from three to five years. A person who comes will stay with the status of asylum seeker for up to five years. There are specific cases cases of people who have been asylum seekers for 10 years," she says. 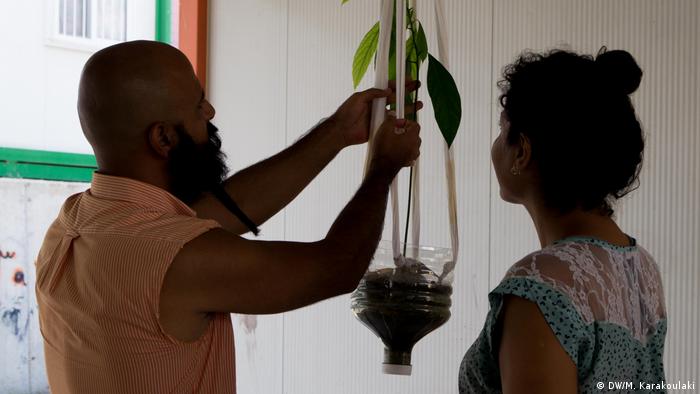 Amir and Layla say conditions in the refugee camp are atrocious

Once Amir and Layla went through the first steps of asking for asylum, they were moved to the refugee camp of Kofinou, an isolated camp between Larnaca and Limassol; the only refugee camp on the island other than the emergency camp near Nicosia which is for newcomers.

Those who live in Kofinou wait for their asylum applications to be processed and although its capacity is for 400, there are currently only 250. People live in containers that have been converted into rooms and the camp is separated in different sections depending on people's case.

Despite the low number of people who stay there, Amir describes the conditions as awful. "There are cockroaches and bugs. The kitchen is always dirty and we try not to go to the toilets," he says.

The worst part, however, is the endless tedium of waiting.

"When you know that you have [to wait] one year, for example, until your asylum interview you can plan ahead. But when they inform you that your interview is in 10 days you calculate the hours. Then three days before the appointment, they [the Cypriot asylum service] cancel it. You cannot imagine how stressful it is," he says.

The conditions, however, do not improve once someone is recognized as a refugee.

Mohammed decided to ask for asylum in Cyprus on the spur of a moment. He was in the country for a UN conference and decided that was the perfect moment to escape from Somalia. Mohammed was working as an investigative journalist and writing about the militant group al-Shabaab. He went through the same process as Amir and Layla and when he received international protection he managed to bring his wife as well. Yet his life did not improve as Cyprus does not have a sustainable integration system. 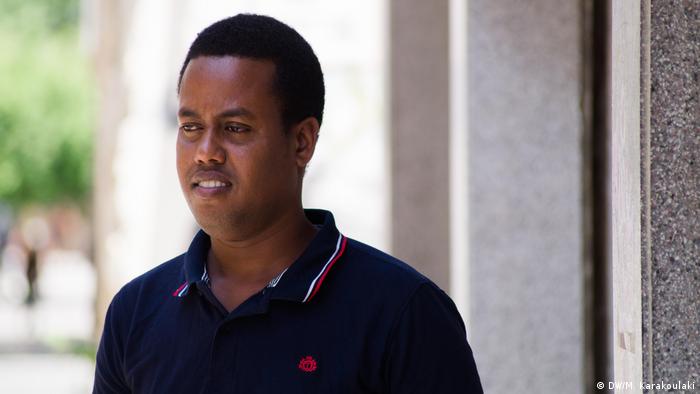 "When I first arrived in Cyprus I faced many problems. In Somalia I had a good job that paid, I had friends. Here I had nothing. My life was incomplete. It's not easy to communicate with the society, it takes time to know the culture and the people," he says.

According to Mohammed the number of people seeking asylum is becoming an increasing problem for Cyprus as the country is not really equipped to deal with large numbers of refugees. However, he tries to be an active part of the society and to help asylum seekers and refugees with their integration. One way is by encouraging them to learn the language. To that end he's created an online petition to ask for access to Greek language lessons for adult refugees.

"If refugees have the opportunity to have a proper education they can then contribute more to the Cypriot society and when some go abroad and lead successful lives, then the people can say these refugees are the product of Cyprus," Mohammed says.

Refugees and asylum seekers are making every effort to be part of and contribute to society. However, access to jobs is limited to the agricultural and, more recently, the service sectors. According to the UNHCR's Katja Saha, the key to integration is access to the labor market.

"The asylum seekers and refugees who come to us do not want to depend on social benefits. They want to be treated with dignity and respect."

*Some names have been changed to protect people's identity, and some quotes have been edited for clarity.