The Berlin Wall fell in 1989 and after years of division, the people of East and West Germany were reunited. Thirty years later, many of their stories have faded. The memorial on Bernauer Strasse recounts their fates.

Sunday afternoon. Sunbeams can be seen shining on the asphalt. It's one of the last beautiful autumn days in Berlin. I walk along Bernauer Strasse, at first glance a street like any other. Cars and trams pass me, people cross my way. But the Bernauer is more than just a road. It is a historical place and since 1998 a memorial to the division of Germany.

After the end of the Second World War, the street was divided into East and West: on one side the Soviet-controlled sector, on the other the French sector. Bernauer Strasse was still passable, but that came to an abrupt end in 1961. On August 13, 1961, Communist East-Germany erected the Wall that separated East and West Berlin. The border ran directly through Bernauer Strasse. You can still see its traces today: a few parts of the wall have been preserved. Where it was dismantled after 1989, high rusted metal bars trace the former course of the border. Behind them are extensive lawns. Here the former death strip extended with barbed wire and mines. Tourists and school groups take photos, lay their hands on the Berlin Wall, children run slalom through the rusty bars. 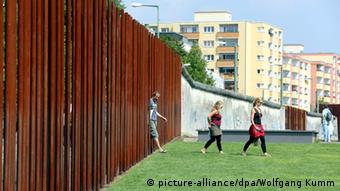 Today, you can easily pass through bars where the Wall once stood

On the other side of the street is the memorial's documentation and visitor center. Here I meet Ida, a little elderly lady who doesn't want to give me her last name. "I haven't been here since then," she says in a shaky voice. Back then, in August 1961, Ida was 21 years old. "I had been engaged for three years." The construction of the wall separated the young couple. Ida's fiancé lived in Berlin-Neukölln, in the West. She lived in Prenzlauer Berg, in the East. Before the Wall was built, it was still possible to see each other. "After that, we could only wave to each other across the Wall." But one evening she came too close to the wall. Men in plain clothes stopped her, she was arrested on the spot. "Many people just disappeared this way." It took Ida some effort to go through the metal bars with me. It seems as if she can still feel the wall. Only when we reach the lawn does she breathe a sigh of relief and continue telling her story.

Ida was detained for three months by the Stasi, the secret state police. Her interrogator suggested that she work for the Stasi and spy on her fiancé. She would have been out more quickly and would have been able to see him again. But she told them: "I am no informer!". Then she was locked up in a cell and interrogated every day. "For three months my family did not know where I was." Only when I went to trial did they see each other again. "My mother had a nervous breakdown because she was worried about me."

It bordered on a miracle: The court acquitted Ida. The next day she went to work as usual. No one said a word about it. She also remained silent. Deep down, Ida did not give up her faith that one day her home country would be united again. "I was sure that the border would not last forever." A few months after the trial, her engagement was broken off. The circumstances were to blame.

Ida was lucky compared to many other people. To date we know of 140 deaths at the Berlin Wall. Border guards, refugees, escape helpers, but also uninvolved people who were in the wrong place at the wrong time. Most of them had an accident or were shot while attempting to escape. Among them were six people on Bernauer Strasse. But there could be many more. "The East German government covered up many incidents," says a tourist guide next to me. "The memorial is investigating the cases. New ones keep coming in." 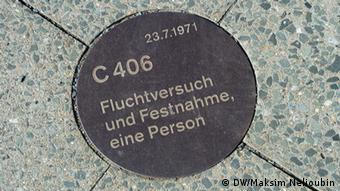 The round commemorative plaques can be found along Bernauer Strasse

As I walk down the street, I discover small round commemorative plaques on the floor. They recall escape attempts, evictions, deaths. I read for example: "September 25, 1961: Escape family B." Or: "August 10, 1961: Eviction of Bernauer Strasse No. 13". The names and dates are linked to the destinies during the Wall period and I feel very sorry for those affected.

A plaque in the middle of the lawn also honors their memory. The photographs of the dead are lined up in small metal windows. The place is shrouded in silent mourning. Some of the victims of the Wall are frighteningly young. Two children were shot at the border, several drowned while playing in the Spree River, because nobody dared to save them. "The river was a borderland. It was forbidden for the firemen to help," a tourist guide explains to his group.  In front of one of the photos is a rose. It is not yet withered. "Some relatives still bring flowers," the guide says. 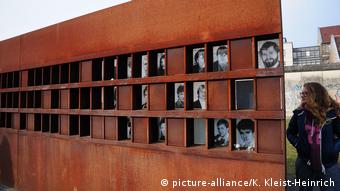 I make my way to the Documentation Center. Here, texts, photographs and other documentation provide further information and data on the history of the years of division. Some visitors sit in front of small screens and watch films on monitors. Others stop in front of the photos. They show escape actions on Bernauer Strasse, where East Berliners jump out of the windows into the West. Some escape attempts were successful. Many failed.

A simple church also belongs to the memorial. The Chapel of Reconciliation. A black cross hangs above the entrance and commemorates the original church that was located here. It was a dark day for the congregation when the East German government had the church blown up in 1985. The original cross broke off from the spire. Today, it lies a few meters away on the lawn. Western parishioners rescued it from the ruins and stored it. Now it symbolizes what united people during the years of separation: hope. When it was demolished, the church fell into ruins. Today the chapel is located on the same spot.

"On August 13, 1961, our last joint service took place, after that we West Berliners were not allowed to go into the church anymore," Elke Kielberg tells me. Even as a child she had attended services in the old Reconciliation Church. 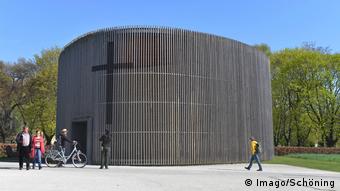 Elke points to a photograph hanging in the visitor center. On it, East Berliners can be seen waving from the stairs of the Church of Reconciliation to the people in the West. It was their first divided service. A painful cut for the then 12-year-old Elke. From then on the church of her childhood was closed. Elke would occasionally spot people she had known before behind the wall. Her voice becomes quieter and quieter. "I was torn." 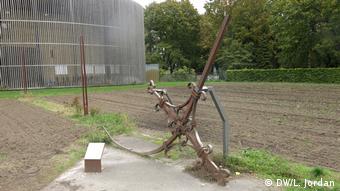 The oval church, which today stands on the site of the former church, gives back to the parishioners what was taken from them. Only a few visitors sit in the pews. A memorial service for the border victims is held three times a week. Elke Kielberg and I light a candle. "When the wall fell in 1989, I couldn't believe it at first. It was only when my cousin and my aunt from the East visited us that it became real. 28 years — and suddenly it was as if I was 12 years old again."

Bernauer Strasse reflects history and stories. About people like Ida, Elke and many others.  It is still not easy for them to share their stories. But that is why there is a memorial. It tells the stories while others remain silent.

In February 1990, 118 artists from 21 countries started painting on the Berlin Wall. By September, more than 100 murals had been created. The Berlin East Side Gallery — one of Berlin's most famous icons — was born.