A day after record-breaking temperatures in Germany and France, a heat wave has eased off as it heads toward a new destination. But the UN has warned that it could cause further environmental damage. 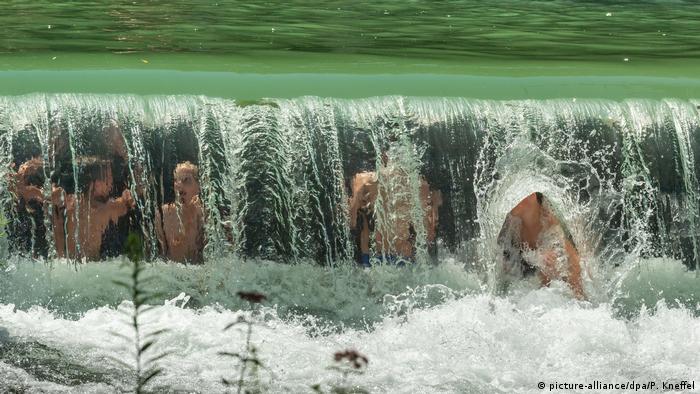 A heat wave across Europe retreated slightly on Friday after a day of record-breaking temperatures in Germany, France and Belgium. But temperatures were still above the norm, prompting humans and animals to seek shade.

In the Bavarian town of Rommelsried, a herd of sheep broke through electrical fencing to cross the road and find shade beneath trees. There was only enough shade within the fenced-in area for a quarter of the 40 sheep. Police have launched an investigation due to possible violations of animal welfare rules.

Meanwhile, Formula 1 racers in Hockenheim, Germany prepared for track temperatures of up to 60 degrees Celsius (140 degrees Fahrenheit). "We're hearing rumors of 60C tracks temps this afternoon," said the Renault F1 Team in a tweet. Some racers even hoped for air conditioning in the vehicles ahead of the German Grand Prix at the Hockenheimring.

At the Tour de France near the border with Italy, the 19th stage of the cycling race was stopped due to a hailstorm, which made the road impassable due to flooding and mudslides.

"The day's course has been called due to adverse weather conditions," the Tour said on Twitter. "Rider times have been taken at Col de l'Iseran."

Read more: How is the heat wave in Europe affecting travel?

Danger on the horizon

As the heat subsides in continental Europe, the United Nations has warned that the warm front headed to Greenland could cause environmental damage. The UN is worried that the heat wave could cause record melting of the world's second-largest ice sheet.

"According to forecasts, and this is of concern, the atmospheric flow is now going to transport that towards Greenland," said Clare Nullis, a spokeswoman with the UN World Meteorological Organization. "This is will result in high temperatures and consequently enhanced melting of the Greenland ice sheet."

Scientists have pointed to abnormal temperature increases as further evidence of the man-made destabilization of Earth's climate system. Activists across Europe have called for bold measures to curb emissions and combat climate change.