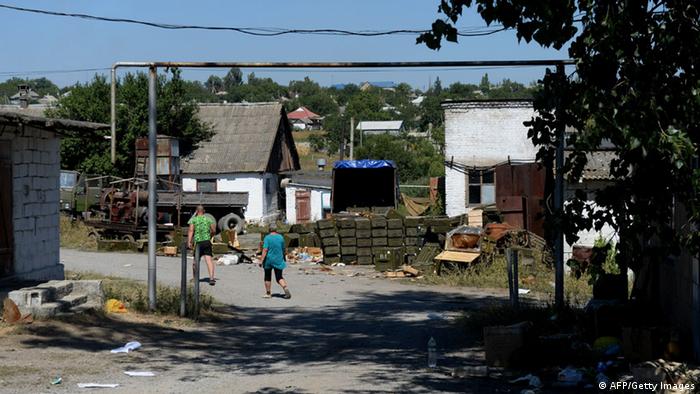 Following weeks of military operations that have seen Ukrainian government forces push deep into the remaining rebel bastions near the Russian border, the tide appears to be turning once again in the conflict.

On Wednesday, there were few signs of government troops south of the rebel-held city of Donetsk, with road blocks on the entire 100-kilometer (60-mile) stretch to the Azov Sea, manned by pro-Russian rebels. Meanwhile, claims were being made in Washington that Russia was directly involved.

"A Russian-directed counter-offensive is likely underway in the contested eastern cities of Donetsk and Luhansk," US State Department spokeswoman Psaki told reporters in Washington.

The Obama administration believes Russia is leading a new military counteroffensive in Ukraine. Psaki said Russia had sent additional columns of tanks and armored vehicles into its neighbor's territory.

Earlier, a Ukrainian military spokesperson said a group of Russian soldiers had entered the small town of Amvrosiyivka.

The town is not far from where Ukraine detained 10 Russian soldiers on Monday. Russia later said those soldiers had crossed the border by mistake.

Russia, which has denied supporting the separatists with weapons, equipment, personnel and training, did not immediately comment on the allegations.

Germany's Angela Merkel told President Vladimir Putin by phone on Wednesday that reports of a new Russian military incursion into Ukrainian territory had to be cleared up, the chancellor's spokesman, Steffen Seibert, said.

"The latest reports of the presence of Russian soldiers on Ukrainian territory must be explained," said Seibert. "She emphasized Russia's major responsibility for de-escalation and watching over its own frontiers."

The accusations of further military incursions and fighting indicated that Tuesday's in-person talks between Ukraine's President Petro Poroshenko and Russian President Vladimir Putin, the first since June, appeared to have had little impact on the ground.

In Minsk, the two leaders claimed progress had been made on efforts to end the conflict.

President Poroshenko criticized the first Kremlin humanitarian convoy, which raised tensions between the West and Moscow, and said he was concerned about Russia's intent to dispatch a second one.

When asked by journalists about plans for a second Russian convoy to eastern Ukraine, where government forces are fighting pro-Russian rebels, Peskov said: "It will happen soon; the Russian side is ready to do it even tomorrow."