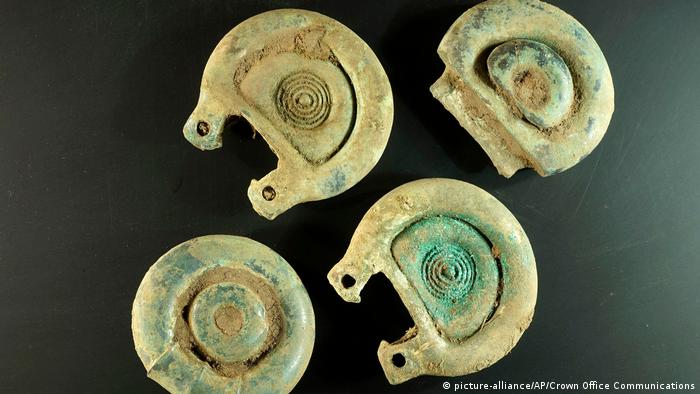 An amateur treasure hunter has discovered a Bronze Age hoard in Scotland, according to reports on Monday.

Mariusz Stepien made the discovery in June and informed the country's Treasure Trove Unit (TTU), prompting a 22-day search at the site.

The finds included a sword, dated as being from 1,000 to 900 BC, axle caps from a chariot , as well as a horse harness. Experts traced the straps connecting the rings and buckles of the equestrian equipment, whose leather and wood had been preserved by the soil.

"I thought I've never seen anything like this before and felt from the very beginning that this might be something spectacular and I've just discovered a big part of Scottish history,'' Stepien said.

"I was over the moon, actually shaking with happiness."

Stephen and his hobbyist scavenger friends camped at the site while archaeologists investigated the artifacts.

The Bronze Age cache is now at the National Museums Collection Center in the Scottish city of Edinburgh.

It is one of very few Bronze Age hoards ever excavated in Scotland and a "nationally significant find," according to TTU chief Emily Freeman.

"It was an amazing opportunity for us to not only recover bronze artifacts, but organic material as well,'' she said. "There is still a lot of work to be done to assess the artifacts and understand why they were deposited.''

Under Scottish law, all portable antiquities of archaeological, historical or cultural significance must be reported to the TTU, described on its website as the first port of call for new discoveries and finders.

Items of significance may include anything taken out of the ground and which, on the basis of its age of rarity, "may be worth preserving for the nation."