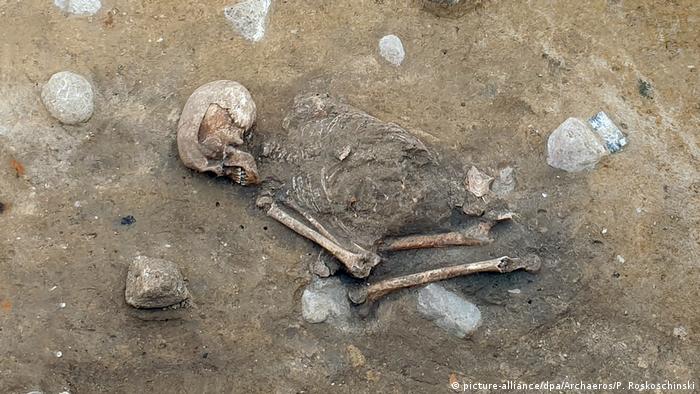 The skeleton was discovered during excavation work for a wind turbine in the district of Uckermark, located around 102 kilometers outside of Berlin.

The woman is believed to have been buried between 2,200 and 2,500 B.C., Christof Krauskopf from Brandenburg's state office for monument preservation told German news agency epd.

He added that the unusual way that the woman was buried makes the makes the find of "a high scientific significance."

Archaeologists Philipp Roskoschinski and Christoph Rzegotta, who made the discovery, said that the skeleton was found posed in a crouched position in a pit near a settlement, not in a cemetery.

Roskoschinski told epd that the discovery was a "rare and exciting find." The woman was laid to rest on her right side with her legs and arms pulled in, with her head positioned to the east with her gaze pointing north.

Read more: Who lived near Pömmelte, the 'German Stonehenge'?

"I've never made a find like this before," Roskoschinski, who owns the archaeological firm Archaeros, told the Tagesspiegel newspaper.

He and his colleague believe that this indicates the woman was purposefully positioned this way and was not simply put in the grave.

Researchers are now carrying out tests to get a better idea of how old the skeleton is as well as how the woman died.

"Unfortunately, there were no other finds in the grave that could tell us more about the woman's life," Roskoschinski told Tagesspiegel newspaper. "But the site was lovingly surrounded by fieldstones."

Archaeologists in Bavaria had been out to find remains from medieval settlements when they stumbled across a much older and very rare find. "A complete stroke of luck," one expert said of the mammoth discovery. (28.03.2020)