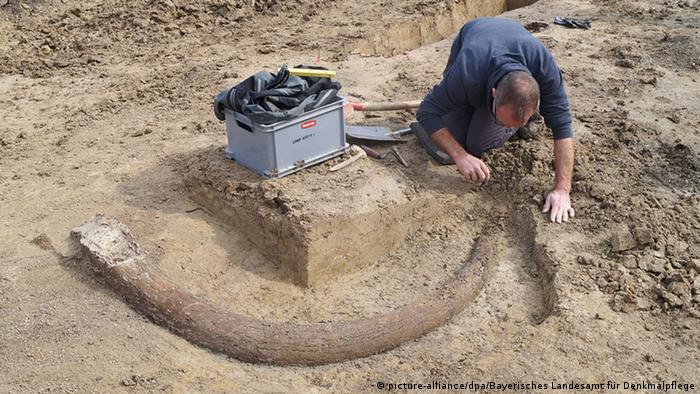 The tusk, measuring nearly 2.5 meters (8 feet) in length, was found southeast of the city of Regensburg as archeologists were looking for remains of a 15th-century town, Bavaria's Regional Office for Cultural and Historic Preservation said in a press release.

"With its 2.45-meter length, including tip tooth, this tusk is an extraordinarily complete find. An absolute stroke of luck," said Gertrud Rössner, the head of the state's geological and paleontological mammal collection.

Mammoths lived in Bavaria, Germany's most southwest state, until 20,000 years ago. It is not usual for mammoth remains to be unearthed in Bavaria, but finding such a long and complete tusk is extremely rare, the office said.

Testing will need to be done to conclude the precise origin of the tusk. Experts believe it may have belonged to a full-grown bull.

Another piece of a bone was found nearby, though it was unclear whether it came from the same animal.

Bavarian archeologist Christoph Steinmann theorized that both bones had been immersed in water a long time ago. This would explain why the outer layers of the tooth remained intact, even though the inside substance had cracked over time. Had the outside been exposed to the air, it would have crumbled immediately, Steinmann added.

The excavation, which is now completed, also turned up a fountain, waste remains, an oven and shards of pottery dating to the Middle Ages.

Paleontologists have found one of the best-preserved specimens of the Ice Age animal to date in Russia's extreme north. They dated the carcass as anywhere from 20,000-to 50,000-years-old.