A 40,000-year-old wolf found in Siberia was bigger than its modern-day descendants. Kept cold in the permafrost, the wolf's fur, ears, brain and teeth had been preserved since the day it died in the Arctic. 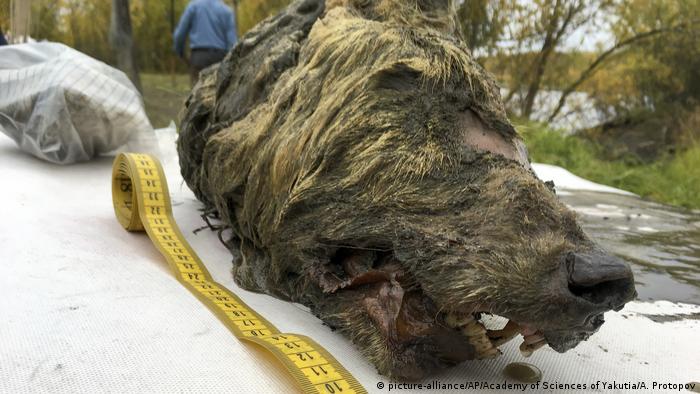 The remains of the wolf were found on the banks of the Tirekhtyakh River in the Russian Arctic region of Yakutia last August.

Researchers at the Science Academy of Yakutia were given the head and worked with colleagues in Japan and Sweden to determine its age.

The academy's Valery Plotnikov said it was an ancient subspecies of wolf that lived alongside and became extinct at the same time as the mammoths.

The find was unique because of its condition. The permafrost had preserved the fur, teeth, ears, tongue and brain for 40,000 years. Previously, only wolf skulls had been found, without fur or tissue.

The severed head was that of an adult wolf whose overall size was about 25% bigger than those living today. Modern Siberian wolves vary in size, weighing anything from 70 pounds to 130 pounds (31 kg to 60 kg). Standing over 3 feet (90 centimeters) tall at the shoulder, they can measure up to 5 feet in length, including the tail.

Now out of the ice, the head will be preserved for science by a process of plastination, which replaces water and fat with plastics.

"This is a fixation by chemical means so that the fur would not come off and so that we could keep it (the head) unfrozen," Plotnikov said in a televised presentation at the academy.

There are believed to be about 200,000 wolves left in the world. Their numbers have been growing in Germany in recent years.

Germany's wolf population has been gradually increasing since the animals were reintroduced in 2000. New data shows there are now up to 160 adult wolves in the country, but the animals still face a range of threats. (24.11.2017)