More than 1,100 people have already died of dehydration in Pakistan's scorching temperatures. The risk is made worse because devout Muslims don't eat or drink anything between sunrise and sunset during Ramadan. 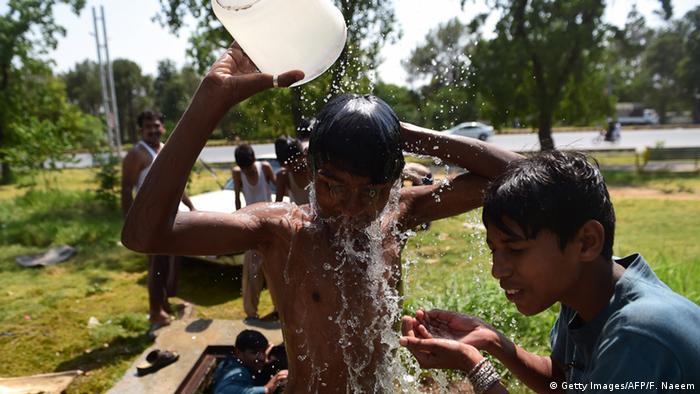 It's hot in Pakistan. Over the last few days, it's been as hot as 45 degrees Celsius (113 degrees Fahrenheit) in the shade and thousands of people are being treated in hospitals. Most of the more than 1,100 casualties have been recorded in the port city of Karachi, Pakistani health authorities report. Military and civilian aid organizations have set up dozens of temporary camps to care for victims of dehydration, heatstroke and circulatory collapse.

Faithful Muslims are currently observing Ramadan, which literally means "the hot month." They don't eat or drink anything between sunrise and sunset during this time, which puts them especially at risk in the current extreme heat. They are much more likely to suffer from dehydration.

If the body's fluid levels sink to dangerous lows, it can dry out. "Vessels contract and blood pressure plummets," Dr. Ulrich Gerth from University Hospital Münster explained. "Blood levels get shaken up because of a lack of electrolytes and important organs don't get enough blood flow anymore. This can lead to a comatose state and cause irreversible damage."

Nausea, drowsiness and cramps are among the symptoms. So are confusion, fever and a strong feeling of thirst. If victims still don't drink, their circulation collapses. The consequences range from fainting to kidney and heart failure and ultimately death.

The body loses water via the gastrointestinal tract, the lungs, the kidneys and the skin. Illness and physical labor increase the fluid loss. There are three different kinds of dehydration in medicine.

Isotonic dehydration is when the body loses water and electrolytes (salts) in equal measures. It can be caused by an insufficient supply of water and sodium, or by vomiting and diarrhea.

Hypertonic dehydration means water loss without an equal loss of electrolytes. This can happen with a high fever or excessive sweating due to physical labor without drinking water and, in extreme cases, can lead a person to die of thirst.

In contrast, hypotonic dehydration occurs when the body loses more electrolytes than water. This can happen when excessive sweating is only compensated by drinking fluids lacking in salt. That's why in extreme heat, it's more helpful to drink mineral water or isotonic drinks with added nutrients than tap water.

Drinking too much at night is bad as well

The Muslims' time of daylight fasting ends on July 16 this year. Eid al-Fitr, the celebratory breaking of the fast at the end of Ramadan, is the second most important Islamic holiday. While the manner of celebration varies from region to region, it almost always involves lots of food and drink.

Until then, devout believers try to right their fluid balance by drinking copious amounts of water after sundown. But that's not healthy either. "It's possible that the body cannot cope with this, depending on its overall condition," Gerth told DW. 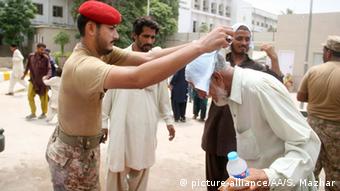 Dehydration victims can get help in heatstroke centers across Pakistan

Drinking too much at once can be damaging. It dilutes the body's electrolytes too much, causing water to be drawn out of cells through their membranes. Gerth says this can lead to cerebral or pulmonary edema in people with existing health conditions.

Not every Muslim has to fast

By now, temperatures in Pakistan have gone down at least a little. And a leading religious scholar in Karachi clarified again that Islam allows the elderly, sick or weak to interrupt fasting in extreme situations.

The reason these groups are especially at risk in extreme heat is that they don't have reserves to draw from. A healthy body has a greater reserve of energy and a more stable circulation, Gerth says.

The World Health Organization (WHO) says on its website that a stomach tube could be used to improve the fluid balance of old people or babies who don't drink enough. Severe dehydration has to be treated intravenously. This comes into play with illnesses like cholera, whose symptoms include heavy diarrhea and vomiting.

A stable circulation, regular urination and the feeling of having had enough to drink are signs of a good fluid balance, according to the WHO. "The ideal amount of water to drink for a healthy person lies between 1.5 and two liters a day," Gerth said. But in temperatures as high as the ones in Pakistan, the body needs two or three times that, depending on how much a person is sweating.

The situation in Pakistan remains strained, despite the sinking temperatures. Many hospitals are full beyond their capacities and authorities reckon more people will die.

In Karachi, the past week was declared to be "work-free" for everybody, to alleviate the risk a little. But according to Gerth, that was just a drop in the ocean.

"Working less in extreme heat is helpful for sure, but it only mitigates the problem," he said. "It can't replace regular hydration."

More than 1,000 people have died in unusually high temperatures, mostly in Karachi. The heatwave coincides with the holy month of Ramadan, with the effects of fasting exacerbating the situation. (25.06.2015)