Radicalization in Belgium: ′It will take years to fix′ | Europe| News and current affairs from around the continent | DW | 07.10.2017

Radicalization in Belgium: 'It will take years to fix'

Belgium has been fighting religious radicalization since it became painfully obvious that Islamists were operating in the country. Art and humor have become tools in the battle. But there is still a very long way to go. 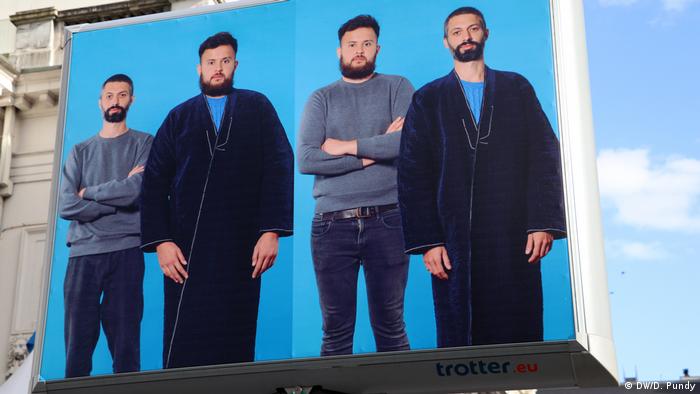 The photo shoot in the Brussels neighborhood of Molenbeek is playful: Painter Samuel Vanderveken is wearing a grey wool sweater and jeans. His friend Nikita Imambayev stands to his right wearing a traditional chapan — an overcoat worn by Muslims in Central Asia. Both men have dark hair and beards, and generally look rather similar. They pose, standing side by side, with their arms crossed. Then they change roles. Somewhat hesitantly, but nevertheless with a big smile, Vanderveken puts on the chapan and suddenly becomes a Muslim. The transformation seems perfect.

The men are taking part in an art project called "Hipster / Muslim: The New West," organized by the Get Me collective. The clothing swap is designed to tear down prejudices between Muslims and non-Muslims. They are young, easily fit into the "hipster" category and both work in the Molenbeek neighborhood. Vanderveken is a Belgian-born atheist. Imambayev comes from Uzbekistan, runs a news portal and is a practicing Muslim.

"I never say I'm a Muslim when I introduce myself to people," says the journalist. "I am embarrassed about it. I am afraid of putting other people in an unpleasant situation. And then I get embarrassed about getting embarrassed," says the 28-year-old. He is participating in the project to help break down preconceptions. He says he wants to show that a person can have more than one identity, and that being a "Muslim" is just one of many such identities.

Project ideas like "Hipster / Muslim" first land on Sarah Turine's desk as Molenbeek's youth and integration representative. The community is doing everything it can to shake the "terrorist hotbed" image it received after the 2015 Paris and 2016 Brusselsattacks. Both attacks were planned by people who were either born in the neighborhood or had lived here.

The difficulty of living together

Sarah Turine has difficulty articulating all that has happened in Molenbeek over the last two years but acknowledges: "The attacks were a real catalyst." She says that a number of groups were active in the neighborhood prior to that, but individual groups and communities generally kept to themselves. Though reluctance to interact with others has lessened since then, she adds, "there still isn't a real sense of coming together as a community." 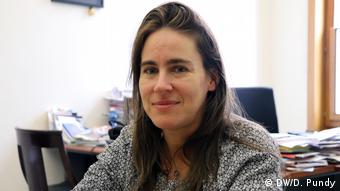 Local politician Sarah Turine: 'We are at the start of our journey in the fight against radicalization'

Despite rapprochement, things are far from relaxed. "We are at the start of our journey in the fight against radicalization," she says. Projects more specifically aimed at the problem of radicalization, and going far beyond the art initiative of the clothing exchange, are needed if there is to be any hope of reaching youths who feel marginalized by society and are therefore susceptible to radical Islamist ideology. But Turine says she often doesn't have the budget to fund such programs. The Belgian government's crackdown on the neighborhood and the stigmatization that accompanied it can still be felt: "Just because they haven't all blown themselves up, that doesn't mean they feel any more accepted than they did two years ago."

Michael Dantinne, chairman of the University of Liege's Center for the Study of Terrorism and Radicalization (CETR), says that religion is just one of the reasons that a person may become radicalized. He says that other factors, such as unemployment, failed integration measures and poor urban planning, contribute to radicalization than anything else. "But those problems have been plaguing Belgium for 20, 25 maybe even 30 years now," according to the political scientist. That makes it even harder to effectively fight the root causes of radicalization.

"The most important thing," says Dantinne, "is that we keep pushing toward a true mixture of social classes in Belgium." He says that class interaction is the most effective way to help trouble spots like Molenbeek and to fight against radicalization. 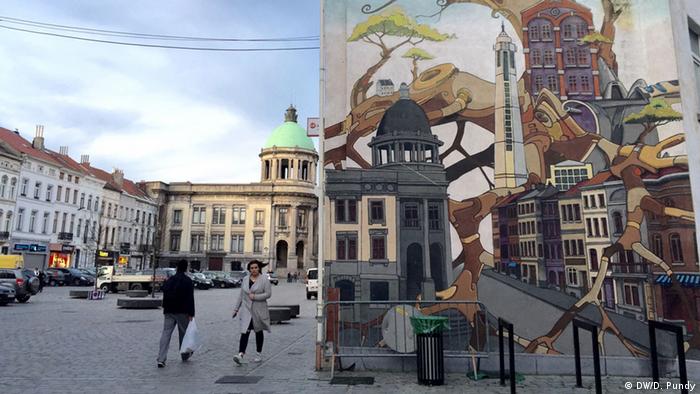 The Molenbeek town hall in reality and graffiti

The photos taken for the Molenbeek "Hipster / Muslim" project are on display in front of the opera house in the center of Brussels. The choice of venue is conspicuous and designed to put Molenbeek in the spotlight. Several of the participants are encountering one another for the first time since the photos were taken. They joyfully greet one another, and exchange hugs and kisses. They are all very pleased at the sight of their photos. In this small group, at least, the concept of breaking barriers and coming together seems to work. 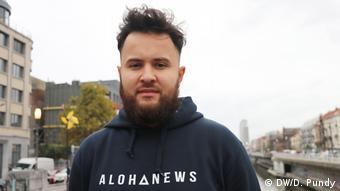 "Do a lot of people from the neighborhood come to your studio?" asks journalist Imambayev of Vanderveken. "Well, not really," admits the artist. "The people who run the studio keep trying, but it will take time," he says. Imambayev adds, "I hope that when young people start moving to Molenbeek it will do more than just drive up rent." Both men are hopeful that different groups in the neighborhood will find a way to come together.

Local politician Sarah Turine says that it is the federal government's responsibility to make sure local representatives have enough funding to actually bring about positive change. Political science professor Michael Dantinne also sees government responsibility in meeting the challenge. He says it will take at least five to 10 years before anyone can begin to tell whether the effort to stop radicalization has been successful. Adding that strong will is needed to fight the root causes: "It will require policies that have to be sustained for a very long time and will be extremely expensive. But that is the only way out."