The Black Lives Matter movement in the United States has also brought racism and a lack of diversity in sport climbing to the fore. The German climbing scene is no exception. 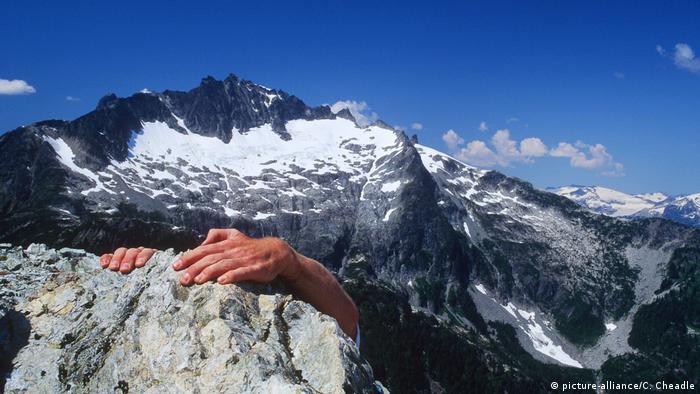 "I hope that one day, racism doesn't exist, but for now, it is still an issue, and it has been an issue," Black climber Meagan Martin told DW. Martin believes racism "for most people, it's something that they don't witness regularly, but just because you don't always see it, doesn't mean it's not there. As a Black climber, I've always been aware of the presence of racism, but I've chosen not to let it bring me down, and instead make me stronger."

Meagan Martin is a professional climber who has competed for the United States in World Cup competitions. She became famous for her agility in the obstacle course on the television show American Ninja Warrior. Martin has been actively involved in the Black Lives Matter movement.

"I think that we are already seeing how the acknowledgment that racism exists is impacting the climbing community," Martin said. "Companies are taking a step back and looking inward to see areas where they've failed to be an ally to the Black community and how they can do better moving forward. Many athletes are also taking this time to reflect, take accountability, and educate themselves to be a better ally."

People of Color are still underrepresented in sport climbing. A 2019 study in the United States showed that in national parks African-Americans made up just one percent of the visitors, despite accounting for around 13 percent of the entire population.

"That lack of participation is the problem," Mills told National Geographic. "It's not a question of whether or not African-Americans can climb high mountains. What matters is as a group we tend not to. And for a variety of different social and cultural reasons the world of mountaineering has been relegated almost exclusively to white men."

Black climbers are not just the exception on climbing walls, but also on expeditions to the world's largest mountains.

One of the reasons for this is a "lack of Black role models in sport climbing," said Molly Thompson-Smith.

"I'm constantly aware of how I 'stick out'," said the 22-year-old, who is already one of biggest talents in British climbing and has reached the podium at a World Cup event. "For some people I think this could be a reason to avoid starting climbing, due to feeling uncomfortable or just a lack of connection to the sport. With a lack of Black role models to relate to within the sport, I'm not surprised people of color may not feel like they could see themselves being a part of the community."

Not only that, but climbing "is a fairly expensive sport especially if you want to have nice gear, memberships at different walls, and travel for climbing on rock or in competitions. This will influence who can be a part of the community and become a barrier to those from less privileged backgrounds."

Meant as a joke but wide of the mark

Thompson-Smith said that she has only personally experienced racism a handful of times.

"When it has happened in a climbing gym it's been 'harmless' comments or jokes I've just shrugged off. I'm white and Black Caribbean with fairly light skin – it's my hair that is the 'giveaway.' Jokes from friends about my skin tone or people wanting to touch my hair in fascination were normal in my climbing childhood, and I never told people how it really felt to be the subject of those words/actions. It may have not meant to be offensive, but I wouldn't be so accepting of these comments nowadays."

"I've found the last month very emotionally draining, but it's also made me quite hopeful," Thompson-Smith said. "I admit, I could have been – and should have been better when it came to racism. I could have educated people on how their 'jokes' or 'observations' about people of color were not appropriate. The situation has made me want to do more to encourage more diversity within the climbing community, and to make sure it feels like a safe and welcoming place for people of any background to be a part of."

Last week the respected editor-in-chief and publisher of the US climbing magazine Rock and Ice, Duane Raleigh, resigned – under extraordinary circumstances.

"We were young and could climb and enjoy risks because we had freedoms that non-white America does not have," he said. "We were part of a culture that I regret. White privilege let our 'fraternity' exist, and we could be inappropriate, and do just about anything without consequences. Broadly speaking, the white, male-dominated club still exists worldwide."

Raleigh also apologized for something he did when he was a young man – using the N-word to name a route that he had conquered.

The Black Lives Matter movement has sparked a discussion about discriminatory names being used for climbing routes. In mountain climbing, whoever conquers a route for the first time has the right to name it. What may be an attempt at humor can be deeply insulting.

US climbers, for example, have now spoken out in favor of boycotting the "N****** Wall" in the Owens River Gorge in Eastern California until the insulting name is replaced. The climbing portal mountainproject.com maintains a list of "bad names," route names that are perceived as racist, sexist or otherwise discriminatory. The list now includes more than 2,000 names.

Germany is no exception when it comes to discriminatory names. Among them are "Der N**** mit dem Knackarsch" in the Franconian Jura, a popular climbing region in southern Germany. The climbing portal frankenjura.com lists two further route names that included the N-word ("N****kuss" and "Scharfer N****).

A fourth route ("Indianer and Bambusn****") has since been renamed.

"Even though the story behind it was a lot of fun, the name is no longer tenable in today's world," explained the first person to conquer that route.

This would also apply to "Bimboland," as part of a climbing region near Kochel am See in Bavaria has been named. It includes a term often used by right-wing extremists.

The German Alpine Association (DAV) said in response to a DW query that it is important to "stand up for equality and diversity at all levels."

However, according to Steffen Reich, the DAV's head of nature conservation and cartography department, the scope for action is limited.

"Firstly, the route names are not assigned by us but by the first ascenders. And secondly, we do not keep a database and do not create climbing guides in which the discriminatory names are listed, so we can't simply change them," he said.

According to Reich, the only practical way forward is to impress upon authors, publishers and climbing portals the need "to work towards changing or deleting the discriminatory names."

Racism is now a topic of discussion in the sport-climbing community – not only in the United States and Germany.

"It is comforting to know that my climbing peers are taking a second to see the world through my lens and the differences that do exist," Meghan Martin said. "I was born this way, this is the life I've chosen to lead, and I am proud to be a black woman in the climbing community."

German basketball star Dirk Nowitzki has become the latest sportsman to comment on the death of George Floyd in the USA. The retired NBA great expressed support for those affected by racism and fears for his children. (03.06.2020)

As demonstrations against police brutality and racism continue in the US, big Bundesliga names have shown their solidarity and help spread the message. The response from German football authorities is, as yet, unclear. (01.06.2020)

In the midst of the global Black Lives Matter movement, French footballer Jean-David Beauguel had to endure monkey chants during a recent game in the Czech top division. He told DW he "knows it will happen again." (18.06.2020)

Football’s return to European stadiums has been a source of joy, but a spate of anti-Black Lives Matter protests has sullied the comeback. A high-profile incident in the Premier League was one of many. (23.06.2020)

Football returned to the UK after months of stoppage due to the coronavirus pandemic. Aston Villa and Sheffield United players kneeled and wore special BLM shirts. (18.06.2020)

Black Lives Matter in Brazil: A mother fights for justice for her dead son 07.03.2021

A Brazilian mother on a mission: After the death of her 5-year-old son, Mirtes Renata de Souza became an activist committed to fighting racism.