Putin doubles down on unpopular pension reform but softens blow

Vladimir Putin had previously sought to distance himself from pension reform that has caused outrage in Russia. Now he has taken ownership of the unpopular reform and told Russians there is no other choice. 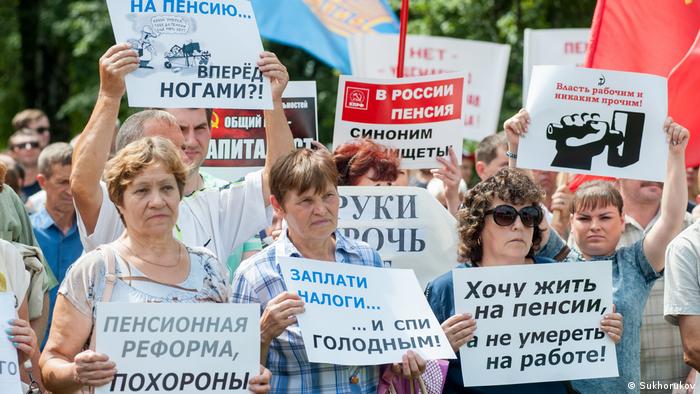 Russian President Vladimir Putin on Wednesday sought to soften the blow of a deeply unpopular pension reform package that increases the retirement age.

In a rare televised address to the nation, Putin sought to explain that pension reform "cannot be put off any longer" due to economic and demographic trends.

"In the long term, if we hesitate now, it could threaten stability in society and hence national security," said Putin.

The pension system "would crack and eventually collapse" if the retirement age were not raised, he said. "I'm asking you to be understanding of this."

Opinion polls suggest 90 percent of Russians oppose the reform package increasing the retirement age for women from 55 to 63, and 60 to 65 for men.  The proposal is blamed for Putin's popularity rating falling from 80 percent to 67 percent.

Putin, who had previously promised not to change the retirement age, had originally sought to distance himself from the pension reform as something put forward by Prime Minister Dmitry Medvedev's government.

"Putin was very shocked that his ratings are falling so much just because of this announced pension reform, which he has distanced himself from the very beginning," Julius von Freytag-Loringhoven, the head of the Moscow office of Friedrich Naumann Foundation, told DW.

However, in addressing the nation with his own proposals he has effectively taken ownership over pension reform. In doing so, he also sought to soften some of the blow.

"Our decisions must be fair, balanced and absolutely take into account people's interests," he said.

Many people worry that they will not live to receive their pensions. Life expectancy for men is only 67 compared to 77 for women.

As Communist Party leader Gennady Zyuganov put it, with Russian men dying in their 60s "they will all get their pension in their coffins."

Life expectancy in Russia has risen from around 65 in 2003 to 72 years in 2016, according to the World Bank. The government argues that increasing life expectancy puts pressure on the pension system.

Why is Putin pushing up the pension age?

Russia also faces an impending demographic crisis as a result of low birth rates following the collapse of the Soviet Union.

Putin also outlined some potential tax breaks for seniors, an exception for women with many children, increasing unemployment insurance for those close to retirement age and measures to protect older people from employment discrimination.

Unlike in some Western countries, pensions in Russia are quite low. Putin said that the reform would allow for inflation adjustments to increase pensions from 14,000 rubles ($200; €175) today to around 20,000 rubles a month in 2024.

The Cabinet put forward the pension reform package in June just before the start of the World Cup, a move critics said was designed to avoid attention while the public was distracted. The lower house of parliament, the Duma, has given a first reading approval and its set to continue discussing the bill in September. 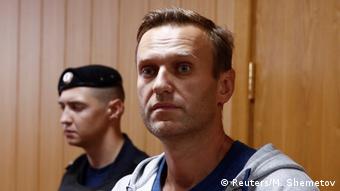 Navalny was jailed ahead of planned pension protests

In recent weeks, there have been rare large-scale protests in opposition to the reform.

"Putin is panicking and is trying to sweeten the pill," said Navalny, who was jailed on Monday for 30 days.

Normally close to Putin's United Russia, the Communist Party has said that it would still not support pension reform with the new changes and is demanding a referendum on the issue.

Stefan Meister, the head of the Central and Eastern Europe, Russia and Central Asia at the German Council on Foreign Relations, told DW that by addressing the nation Putin is trying to take control of the situation.

"It is an attempt to take the wind out of the sails of this huge wave of emotions that we have had in Russia in recent weeks and, ultimately, to mitigate the damage caused to Putin as President," he said. "But ultimately it's about enforcing this reform in one way or another, despite resistance."

Tens of thousands of Russians have been protesting against a government pension reform proposal that includes raising the retirement age for both men and women. DW's Miodrag Soric reports from Moscow. (03.07.2018)

The Communist Party leader said the proposed changes mean that people will get their "pension in their coffins.” The proposal to increase the pension age is widely unpopular. (29.07.2018)

Russia appoints actor Steven Seagal to deepen ties with US

American action movie star Steven Seagal has been named as a special representative of the Russian Foreign Ministry. The unpaid role will focus on developing Russian-American relations in the areas of culture and art. (05.08.2018)