Tens of thousands of Russians have been protesting against a government pension reform proposal that includes raising the retirement age for both men and women. DW's Miodrag Soric reports from Moscow. 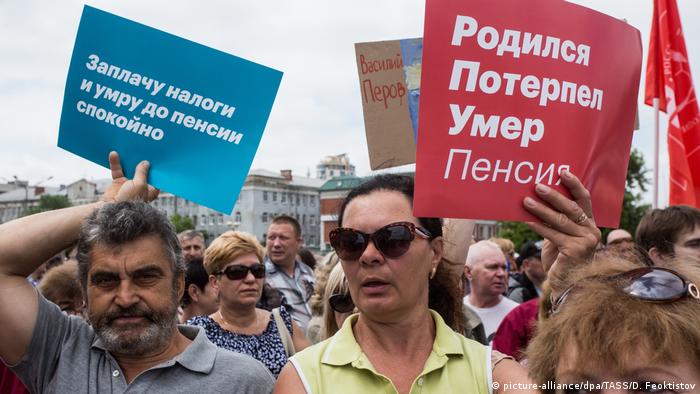 There's growing resistance to Russian Prime Minister Dmitry Medvedev's planned overhaul of the pension system. Thousands have taken to the streets to protest the gradual increase of the retirement age.

Back then, President Vladimir Putin promised not to touch the current retirement age "as long as I'm president." Right now, though, he's keeping mum about the prime minister's proposal. In fact, many experts believe he's sent Medvedev into the battle on his own behalf to see how ordinary Russians will react.

If resistance to the reform plans grows too strong, Putin could then back-pedal or try to find a mutually acceptable compromise.

A matter of comparison

By European and global standards, Russians get to retire early. What many critics fail to consider is that the pensions paid out are hardly enough to make ends meet. That's why most people continue to work as long as they're healthy enough to do so.

According to official figures, the average pension in Russia is 13,342 rubles (€180, $210) — that's not exactly much, but is nonetheless an important financial contribution to ease hardships.

Authorities have so far allowed protests against the pension reform plans in all cities in which there are no World Cup matches going on. Once the soccer tournament is over, protests are expected to also reach Moscow and St. Petersburg. Recent polls have shown that nine in 10 Russians are opposed to raising the retirement age.

Hence many people think the planned reform is a grave injustice — to get nothing back from the pension fund after a tough working life, the economic hardships experienced in the former Soviet Union and the upheavals of the 1990s. It's no consolation for them to hear that the average life expectancy is forecast to rise over the next couple of decades. 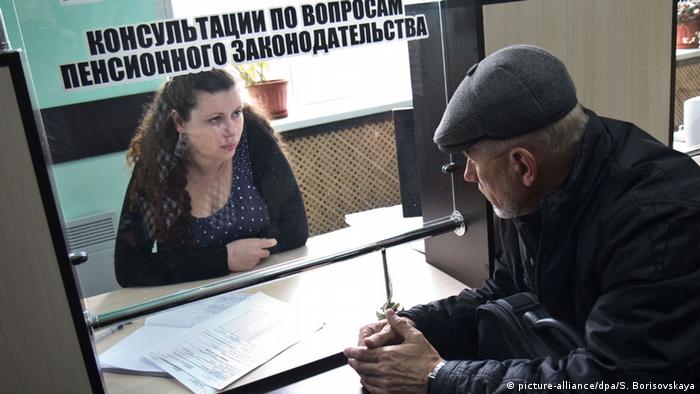 As Moscow floats its pension reform proposals, a higher retirement age is widely perceived among Russians as being unfair

Furthermore, hundreds of thousands of people didn't have regular work contracts in the 1990s, and that impacts their pension payouts. So, many pensioners would be punished once more for the state's inability back then to make an orderly transition from a planned to a free market economy and cushion the social effects of the dramatic changes.

People are also angry about what they perceive to be the government's clumsy maneuvers. On the eve of the World Cup, Prime Minister Medvedev announced the reform plans, giving rise to speculation that the Kremlin was hoping to push through a highly unpopular measure while people were busy watching soccer games.

Independent trade unions and regime critics are now trying to profit from this blunder. Supporters of opposition leader Alexei Navalny have called on people to organize protests, as have the ultra-left Levy Front and others. In Omsk, Vladivostok and Tver, thousands of people took to the streets to demand Putin's resignation and that of the whole government.

Communist leader Gennady Zyuganov points out rightly that the popularity of the governing parties has fallen 12 percent in the past few weeks, while the Communists have gained 5 percent. The latter aim to stage a nationwide referendum on the government's proposal. A petition against the plans has already been signed by 2.6 million people.

What's troubling the Kremlin is that resistance to the pension reform is uniting parliamentary and non-parliamentary opposition forces. Among the opponents is exiled oligarch Mikhail Khodorkovsky.

The current public debate has tended to give short shrift to purely economic factors, including Russia's demographic problem. There are 43 million pensioners in the country. The number of those paying into the pension system is falling, while the number of people entitled to a pension is rising. Average life expectancy has increased by seven years since 2005. Since 2012, Putin has hiked pension payouts by 40 percent, which has been a heavy burden on state coffers. But the state can only provide adequate financing as long as oil and gas prices are sufficiently high.

Moscow pumps some €45 billion into the statutory pension fund annually. Making private provisions for old age is not a popular concept with most Russians who still tend to rely heavily on the state.

No matter what the World Cup may bring for Russia — the Kremlin looks unlikely to be able to ignore the groundswell of opinion against the pension reform plans forever.

The verdict of a court in western Germany is the first step toward justice in Syria. It also paves the way for verdicts in war crime trials worldwide, DW's Matthias von Hein writes.