Russian opposition leader Alexei Navalny has been declared ineligible to take part in next year's presidential election. He's serving a suspended sentence in a case he says was organized to stop his political career. 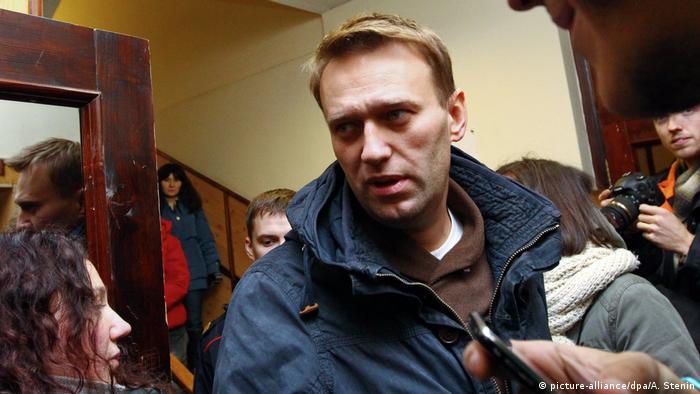 Russia's central electoral commission said on Friday that prominent opposition leader Alexei Navalny is barred from running as a candidate in the country's presidential election next March and April.

"Currently, Alexei Navalny is not eligible to stand for office," the commission said in a statement, citing his five-year suspended sentence for embezzlement.

The panel said that under Russian law, someone who is convicted of a serious crime cannot stand for public office until 10 years after their sentence ends.

The 41-year-old Navalny, who has been fiercely critical of President Vladimir Putin's running of the Russian government, had declared his intention to run against the three-term leader.

Navalny has complained that the case, which saw him and a business partner found guilty in 2013 of misappropriating about 16 million rubles (446,488 euros, $500,000) worth of lumber from a state-owned company, was fabricated to stop his political career from flourishing.

Although the European Court of Human Rights last year quashed the verdict, the same Russian court held a retrial earlier this year, issuing the same sentence.

Navalny is currently in a police cell, serving a separate 25-day sentence for organizing an unauthorized protest on June 12, which saw more than 1,700 people detained nationwide.

Inside Europe: Crackdown on protestors in Russia

Inside Europe: Crackdown on protestors in Russia

Navalny has already opened campaign offices in several Russian cities to help him meet the required 300,000 signatures to enter the race. He is seen by many analysts as the main threat to Putin's strong grip on power.

Putin, who has been either prime minister or president since 1999, is expected to stand for a fourth term as president, but has yet to confirm his plans.

Current opinion polls suggest Putin would win by a wide margin despite Navalny's promise to unwind Russia's endemic corruption problem. But the opposition leader plans to harness the internet and visit less populous provinces in advance of the formal election campaign.

Navalny was allowed to stand for Moscow mayor in 2013, coming second to a pro-Kremlin candidate.

A court in Moscow is hearing a lawsuit brought by Russian billionaire Alisher Usmanov against Alexei Navalny. The opposition leader had accused Usmanov of bribing Prime Minister Dmitry Medvedev. (30.05.2017)

Putin-critic Alexei Navalny has been jailed for 30 days for organizing public meetings. Hundreds of people have reportedly been detained at unauthorized rallies in Moscow and St Petersburg. (12.06.2017)