Fall, autumn, sweater weather — whatever you want to call the cold, gray season leading up to Christmas, there's one thing we can all agree on: It's pumpkin time, and never more so than on today's Pumpkin Day! 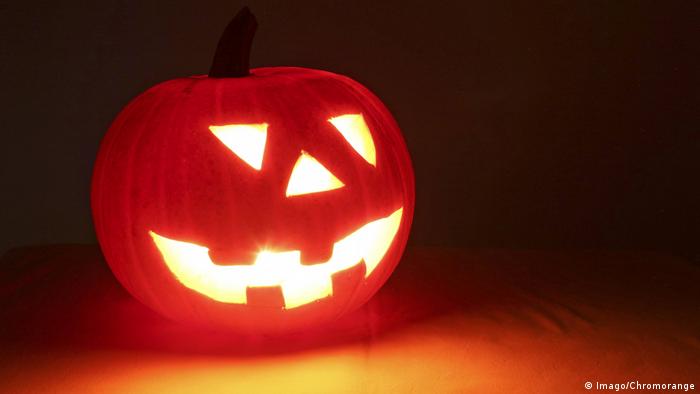 Ah, fall. The leaves change color, the first chill is in the air and your favorite coffee shop offers up pumpkin spice lattes. In North America, it's hard to imagine this season without pumpkin flavors and decorations, which is why the squash even has its own holiday in the US: October 26 is Pumpkin Day. And if you need some pumpkin-pertinent knowledge to show off, we've got you covered!

The term derives from the Greek word pepon, which means "large melon" — makes sense when you think of the shape. The French turned this name into pompon, the British used pumpion. The first settlers in the American colonies called the squash pumpkin and thus coined the name that we still use today! The German term kürbis, on the other hand, is more reminiscent of the Latin cucurbita.

The heaviest pumpkin ever recorded tipped the scales in 2016 at a whopping 1,190 kilograms, or 2,625 pounds. Although pumpkins are native to North America, a Belgian horticulturist raised the pumpkin in Germany, squashing the world record for the heaviest fruit. The record-setting pumpkins are a variety of Curcurbita maxima bred in Nova Scotia and they tend to prefer cooler weather — which could explain why the world's last three heaviest pumpkins have all hailed from Europe.

And lots of pumpkin means, of course, the possibility for lots of dessert: the largest pumpkin pie ever made was more than 1.5 meters (5 feet) in diameter, weighed over 180 kilograms (350 pounds) and used 35 kilograms of pumpkin, 16 kilograms of sugar, 12 dozen eggs and took six hours to bake. This giant isn't the 1,190-kilogram pumpkin (it weighs a mere 1,008 kilograms), but the young man pictured here grew that record-breaker as well. Mathias Willemijns seems to have the magic touch when it comes to pumpkins!

In the US, pumpkin sales spike around Halloween. There's hardly any child in the US who hasn't carved a scary smile into the orange-colored squash and turned it into a jack-o'-lantern, lighting up their front stoop or window. The tradition of pumpkin carving was brought to the US from Ireland by immigrants in the 1800s.

The term jack-o'-lantern is said to come from the legend of a man named Jack who tricked the devil into not taking him to hell once he died. But he wasn't good enough to make it into heaven either, so he was doomed to wander around with only a hollowed turnip with coal inside to light his way. The Irish used to carve and light up turnips to keep wandering spirits like Jack away. Once in the US, they turned to pumpkins instead.

4. The weird world of pumpkins

Hooligan, Pleasure Dome, and Orange Smoothie — yes, those are all pumpkins, of which there are more than 45 different species! Not all pumpkins are alike. Some are warty, some are smooth and each variety serves a different purpose. There are pumpkins perfect for pie, others for roasting and some that are better left intact to adorn your front porch. 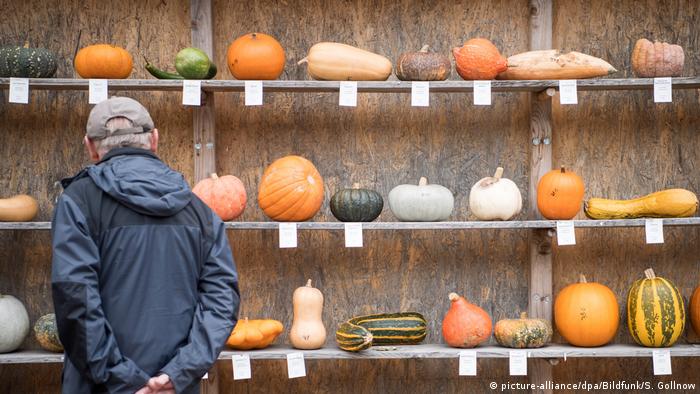 Not all pumpkins are round and orange!

Pumpkins are considered a fruit, not a vegetable. According to the Merriam Webster dictionary, a fruit is "the usually edible reproductive body of a seed plant." Vegetables on the other hand are the edible portions of plants like leaves, stems, roots and bulbs. Pumpkins are the fruit of the pumpkin vine — and extremely delicious. Traditional delicacies include pumpkin pie, pumpkin soup and pumpkin bread. You can roast the seeds and snack on them, and you can even eat the plant's flowers. They're great for when you're fighting a cold because they contain lots of vitamin C. In fact, the entire pumpkin is basically a super food!

"Half a cup of pumpkin provides 200 percent of the current recommendation for vitamin A, along with lutein and zeaxanthin, which are pigments that promote eye health," according to food and nutrition specialist Julie Garden-Robinson. "Pumpkins are rich in potassium, which helps our muscles contract and nerves fire."

Pumpkins had a bad reputation for many years and were considered poor man's food. But the underdog gourds have made a major comeback. Nowadays, Germans can't get enough of the autumn treasure. (05.11.2013)

Animals get in on the Halloween fun

More and more four-legged creatures are getting in on the Halloween fun, as well as some winged and finned creatures. Like their two-legged counterparts they seem to have an especially good time with jack-o'-lanterns. (31.10.2017)