Protests in Ingushetia alarm Moscow | Europe| News and current affairs from around the continent | DW | 12.10.2018 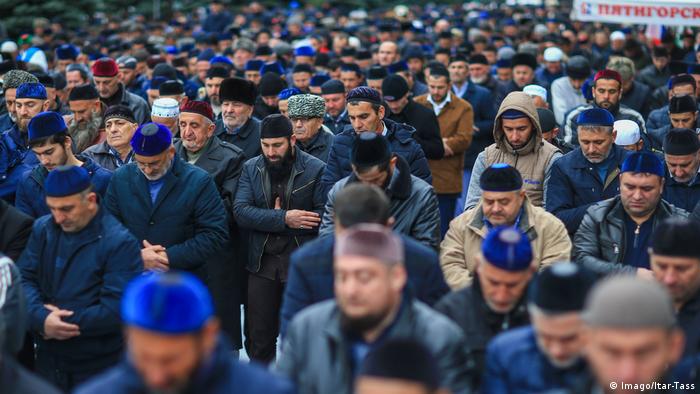 Since late September, protests have been constant in the streets of Magas, the Ingushetian capital

Ingushetia rarely makes headlines and when it does it is mainly because of its larger neighbor and former sister state, Chechnya. And that is also the case this time. For more than a week, people have been protesting a new regional border between the two republics in the streets of Magas, the capital of the Muslim North Caucasus republic. Ultimately, the situation is about much more than unexpectedly broad resistance to a controversial administrative decision. Some observers say it is reminiscent of the end of the Soviet Union and they see the protests as a clear warning to Moscow.

During the days of the Soviet Union, Ingushetia and Chechnya were part of the same autonomous republic. When the USSR collapsed in the early 1990s, Chechnya declared its independence, which eventually led to a protracted and bloody conflict with the central government. Ingushetia remained true to Moscow. Today, both are independent constituent republics, yet there has never been an administrative border separating them. That is set to change. The leaders of both republics, Ramzan Kadyrov in Chechnya and Yunus-bek Yevkurov in Ingushetia, signed a new border agreement in late September and had the treaty ratified by their respective parliaments. The agreement is opaque and purports to represent a fair exchange of land. Still, some experts doubt that fact and are of the opinion that Chechnya will receive much more land than it is letting on in public. 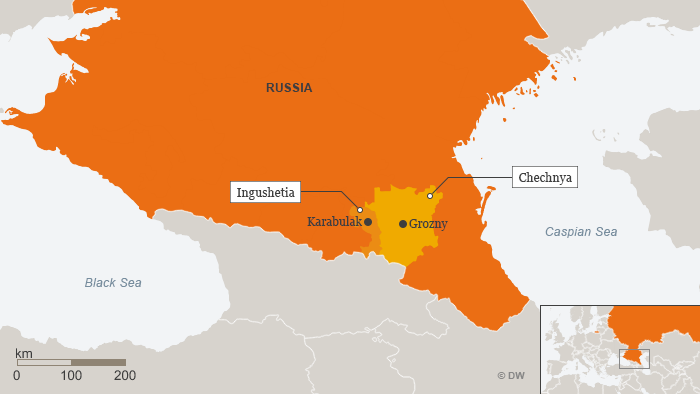 The people of Ingushetia also have their doubts and they fear Chechnya could wrest control over much of their homeland. The way the deal was made – without public debate and away from peering eyes – has caused outrage. Ingushetia's constitutional court has voiced clear support for the thousands of demonstrators in Magas. And in a move that is highly unusual in Russia, so have police. Witnesses have reported that portions of the police have signaled support and are protecting demonstrators from police units from other parts of Russia. This may be why the protests have not been forcefully quelled but rather allowed to go on. The demonstrators' main demand is that the agreement be reversed.

The real reason for the new border agreement and exchange of land remains unclear. There has been speculation that Kadyrov seeks to secure oil deposits. Other observers, such as Ekaterina Sokirianskaia, who heads the Conflict Prevention and Analysis Center in St. Petersburg, suspects that he wants to expand his sphere of influence to include parts of neighboring Ingushetia. Sokirianskaia says Ingushetians are outraged because, among other things, they fear the loss of part of their already small homeland. Ingushetia has only half a million citizens and is the smallest constituent republic in Russia. Sokirianskaia says Ingushetians are extremely sensitive when it comes to their land. 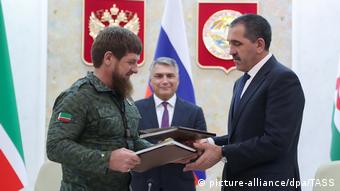 But there are other reasons for the protests as well. The current crisis in Ingushetia has been completely ignored by Russia'a state media outlets or only mentioned in passing. In order to break through the perceived media blackout, a number of activists recently traveled to Moscow to hold a press conference at Kremlin-critical Dozhd (Rain) TV, in hopes of making the demands of the protesters known to a broader Russian audience. Their message: Ingushetians do not want to live like their neighbors in Kadyrov's Chechnya.

"For all of Yevkurov's faults, we can still voice our opinions," says Magomed Metchalo, who lives on the border between Ingushetia and Chechnya and fears that his village may one day fall under Kadyrov's control. "I can write what I think on Facebook and still wake up alive the next morning. That would be impossible in Chechnya." Kadyrov has a reputation for running his country like a medieval prince: There is no opposition in Chechnya and human rights activists are run out of the country.

Some observers have compared the current situation to the ethnic conflicts that accompanied the fall of the Soviet Union. In 1992, Ingushetia also fought a short war with the constituent republic of North Ossetia, costing many lives. "At the time, Soviet leaders refused to believe that the people could rise up in revolt," says political expert Ivan Preobrazhenskiy. They were wrong: "In the end, ethnic conflicts fueled the collapse of the USSR."

Russia seems far from collapse today. Nevertheless, Moscow is watching the situation in Ingushetia very closely without getting directly involved. Still, an end to the conflict is nowhere in sight. Ingushetia's constitutional court has determined that the border issue must be decided by a referendum. Now the ball is in the Yevkurov's court– and Moscow's.

The Council of Europe has honored Oyub Titiev with its prestigious annual human rights award. The head of the Chechnya branch of rights group Memorial has been in prison since January on drugs charges. (08.10.2018)

The United States imposed sanctions on five Russians, including Ramzan Kadyrov, the leader of Chechnya and an ally of President Putin. Kadyrov is accused committing human rights abuses including murder and torture. (21.12.2017)