Chechen refugee interrogated in Germany for sharing a DW article

Police in Bavaria have searched the room of Chechen refugee Mokhmad Abdurakhmanov and seized his phones and tablet after he shared an article posted by DW. The article features a photo of "Islamic State" fighters. 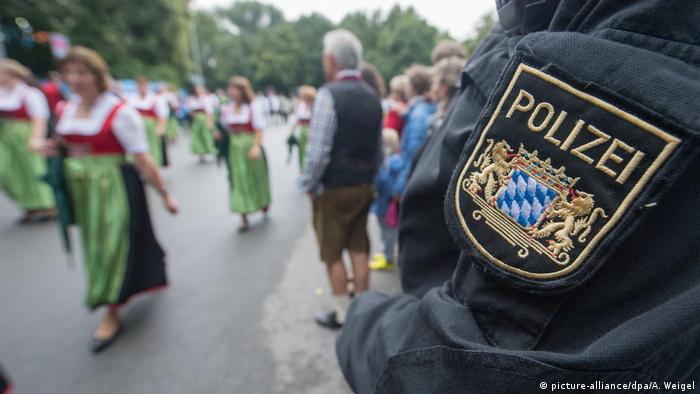 Bavarian authorities launched an investigation against asylum-seeker Mokhmad Abdurakhmanov over content he posted on his Facebook account, namely a DW article on "Islamic State" (IS) weapon suppliers and a separate video apparently showing Israeli military dogs biting a Palestinian child.

He is now suspected of violating the bans on displaying IS symbols and propagating graphic violence.

German police interrogated Abdurakhmanov, a 23-year-old refugee from the Russian state of Chechnya, after searching through his room in a Bavarian refugee shelter and seizing two of his smartphones, a tablet and several USB drives on May 17.

During the search, the authorities also found a flag of the 'Chechen Republic of Ichkeria' — an entity established by Chechen separatists in the early 1990s — in Abdurakhmanov's room.

'We'll take it to court'

Abdurakhmanov shared the article on IS weapons posted by DW Russian in early March. The story, which originally appeared in German on our website, details how jihadists obtained weapons from NATO countries in Europe, including Bulgaria. It also features a third-party photo of a group of Islamic militants wielding assault rifles in Syria.

The Chechen asylum seeker posted the article with a comment: "I don't know who supplied what and where, but those are AKs on the photo."

The photo was also what drew attention of the German police, namely the black headscarves worn by two of the jihadists which displayed the IS logo.

German authorities claim Abdurakhmanov "knew that both IS and this logo were banned" in Germany since 2014, according to official documents obtained by DW. "The suspect also knew that this posting could be seen by everyone," they added.

In addition to sharing the image, Abdurakhmanov is also under investigation for sharing the video of an attack on a Palestinian boy. The video shows Israeli soldiers holding the collars of two large dogs who are clawing and biting at the youth. Posting this clip, according to the police, is against German regulations on displaying graphic content.

Talking to DW, Abdurakhmanov said he hired a lawyer to dispute the grounds for the police search. "Of course we are going to challenge it, we'll take it to court," he said.

Fleeing from Kadyrovs in Chechnya

Abdurakhmanov told DW he arrived to Germany in May last year after he and his older brother, prominent Chechen blogger Tumso Abdurakhmanov, were refused asylum in Georgia. The brothers were reportedly forced to leave Chechnya because Tumso Abdurakhmanov got into a confrontation with the powerful state official Islam Kadyrov in 2015. At the time, Islam Kadyrov served as head of administration for Chechen strongman Ramzan Kadyrov, who is also his second cousin.

"The main reason for leaving is this conflict of my brother's and the fact there is collective responsibility in Chechnya," Mokhmad Abdurakhmanov told DW Russian. "We are members of his immediate family and if we had stayed behind, we would have been severely punished."