Protesters have called on Moscow to stop obstructing an investigation into the 2014 crash of a Malaysia Airlines plane as it flew over conflict-ridden eastern Ukraine. All 298 people onboard died in the disaster. 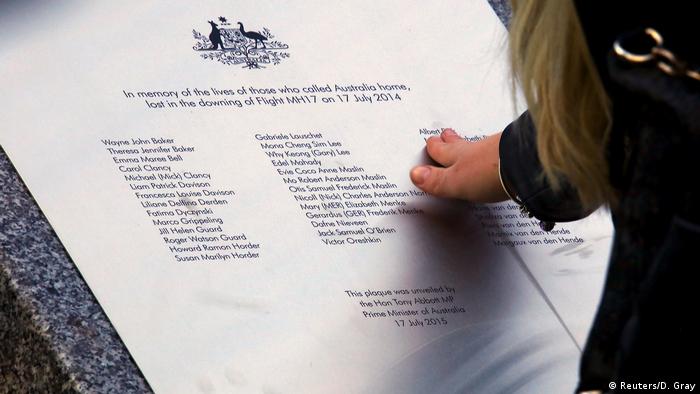 Family members of the victims of flight MH 17 that was shot down over Ukraine in 2014 protested outside the Russian embassy in The Hague Saturday, one day ahead of the anniversary of the plane's downing.

They were calling on the Kremlin to stop blocking investigations into the deadly incident.

All 298 people aboard the Malaysian Airlines flight were killed when a Russian-made Buk missile launched out of territory held by Russian-backed rebels in eastern Ukraine destroyed the plane in mid-flight.

The vast majority of the victims on the Amsterdam-Kuala Lumpur flight were Dutch citizens, but the victims came from 17 other countries, including 38 Australians.

Late last month, the Netherlands announced that suspects in the case would be tried in a Dutch court, under Dutch law. The announcement is the result of an agreement with other countries participating in the investigation and Russia's ongoing refusal to cooperate with any investigation. The plane came down over eastern Ukraine

The minister said "every legal avenue" was being pursued, and urged the Kremlin to comply with UN Security Council resolution 2166, authored by Australia.

"That calls on all states to cooperate to ensure that those responsible for the killing are brought to justice," she told the Australian Broadcasting Corporation.

"It may be that there will have to be a trial in absentia," Bishop added.

Despite evidence to the contrary, Moscow continues to deny any involvement in the fighting in eastern Ukraine, and also denies one of its missiles could have been used against the MH17.

The Dutch effort to move towards a trial in the Netherlands follows attempts, blocked by the Kremlin in 2015, to set up an international court over the incident.

It is not clear how far Moscow will cooperate with a Dutch court if prosecutors name Russian suspects or request information.

Bishop's comments come just days after Malaysia expressed hopes that suspects would be known by the end of the year.