Thousands of people have staged a counterprotest against a planned demonstration by a neo-Nazi party in Kassel. The rally comes several weeks after the killing of one of the city's prominent pro-migrant politicians. 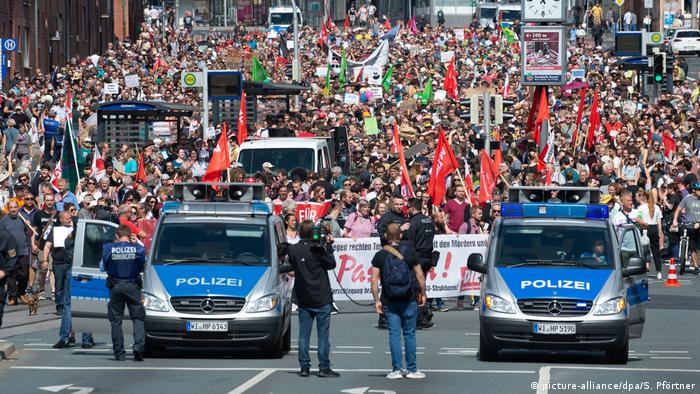 Some 8,000 people took to the streets of Kassel to protest against a neo-Nazi rally in the western German city.

Police said they expected around 500 supporters of the extremist The Right ("Die Rechte") party to attend the rally. However, none had shown up by the time the demonstration was supposed to begin at noon.

The Right said the protest was against the "disgusting" way in which the media has used the killing of a local politician to paint right-wing movements as extremists.

Walter Lübcke, a supporter of Chancellor Merkel's open refugee policy, was shot in the head at his home near the city of Kassel on June 2.

A suspect known to have extreme right-wing sympathies has been in police custody since June 16. He initially confessed to the killing before withdrawing his statement.

German Justice Minister Christine Lambrecht condemned The Right party for holding a rally only weeks after such an "unbelievable crime."

"It is disgusting and sanctimonious that of all people it is those who stir up hatred who are marching through Kassel," she said.