Prosecutors Seen Dropping Charges Against 9/11 Suspect | Germany | News and in-depth reporting from Berlin and beyond | DW | 18.07.2004

The most serious charges facing the only person ever to be convicted for the Sept. 11 terrorist attacks are reportedly to be dropped because German prosecutors are concerned some US evidence may have come from torture. 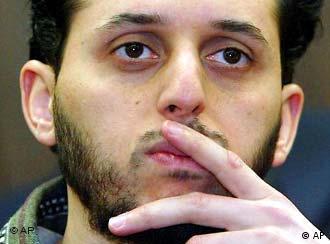 Mounir el Motassadeq was granted a retrial in April

According to the British paper The Observer, German authorities will no longer try to put Mounir el Motassadeq, a Moroccan living in the northern port city of Hamburg, behind bars for aiding al Qaeda terrorists before they crashed hijacked airplanes into the World Trade Center in New York and the Pentagon in Washington in 2001.

Motassadeq had been convicted on charges of accessory to commit murder in 3,066 cases and membership in a terrorist organization in February 2003. But he was freed from his 15-year prison term in April after being granted a retrial. The court said defense attorneys for Motassadeq should have access to interrogation records from alleged Sept. 11 planners Ramzi Binalshibh and Khalid Shaikh Mohammed, who are currently in US custody.

And that's where the trouble for prosecutors starts, since German courts cannot accept evidence if it is thought to come under duress or torture. A senior German intelligence official reportedly told The Observer that the inability to prove the testimony was admissible would make it worthless.

"They contain no details as to where Binalshibh and Mohammed were questioned, nor whether torture or other forms of force were used to make them talk," he said, saying German courts would be extremely tough after the Abu Ghraib prison torture scandal in Iraq. "Their contents may be information and they may be disinformation."

A strain on US-German ties

The latest legal difficulties could strain ties between German and US authorities, who have been irked by Germany's inability to make progress against Motassadeq and others linked to the Hamburg terror cell. For their part, the Germans have been frustrated by US reluctance to supply the evidence in the first place.

The intelligence official said German authorities were now only hoping to convict Motassadeq for membership in a terrorist organization. However, that would likely not carry a jail sentence for longer than the two and a half years the Moroccan has already served prior to being granted his retrial, which was expected to start in August.

Motassadeq's lawyer Josef Graessle-Münscher told the paper he was confident the court would not accept the testimony gathered from US interrogations.

"In Germany, any use of force to produce a statement is unlawful," said Graessle-Münscher. "After Abu Ghraib, if the Americans want to see Motassadeq convicted for 9/11 they are going to have to prove both Binalshibh and Mohammed are in good health, and that they say Motassadeq was a conspirator."

Earlier this month, authorities in Hamburg served Motassadeq and another Moroccan allegedly linked to the al Qaeda cell, Abdelghani Mzoudi, notice that they would be deported after their legal matters were resolved. Mzoudi was acquitted in February, shortly before Motassadeq was granted a retrial.

A Hamburg court has released Mounir el Motassadeq, the only person to be convicted of involvement in the September 11 terror attacks, on bail ahead of a retrial. (April 8, 2004)

US President Joe Biden held a silent tribute at the World Trade Center site, attended a memorial ceremony in Pennsylvania and visited the Pentagon. Other world leaders sent messages of sympathy.

US President Joe Biden signed an executive order unfreezing billions in Afghan funds in US banks. The frozen Afghan central bank assets will be split between humanitarian aid and the victims of the September 11 attacks.